Release Blitz: A Shiver of Shadows by Hunter J. Skye 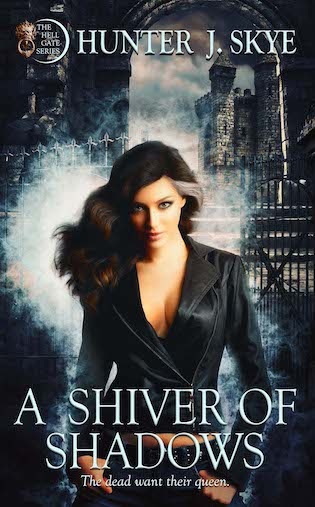 You’d think stopping Armageddon would buy a girl a bit of R&R with her freshly resurrected boyfriend. But things go south again when celebrity soul wrangler, Melisande Blythe, is abducted and dragged to Europe.

There’s more to the darkness hiding in the reclusive, mountaintop country of Andorra than just garden variety evil. There’s something dangerously wrong with her beautiful immortal hosts too.

Gifted with flesh again by the Grace of God, three-hundred-year-old former ghost, Colonel William Grayford, will move heaven and earth to find his beloved. But Europe’s most wicked monsters stand in his way. Something more painful than death awaits Mel, if Grayford can’t find her in time.

The world’s been living on fifteen thousand years of borrowed time and it’s just run out.

“We won’t make it in time, so I need you to do exactly as I say.” She clutched me by the tops of my arms then shoved me into a small convenience store that blazed white with artificial lighting. She dragged me down a narrow aisle, past products with unfamiliar labels, toward a dead-faced man in a turban. His mottled eyes followed us as the woman pushed past his small counter.

“Santuario,” she whispered to the man, and he nodded stoically. Then she turned to me.

“What?” I asked as her hand closed over mine once more, but we were already moving again. We hurtled down a dark, slender hall to an ancient rat-chewed wooden door with symbols painted on it in a dark, drooling liquid. Something about that viscous fluid made my skin crawl. The dingy walls pressed close, and suddenly the hallway felt as though it was swallowing me whole.

“Wait.” My voice wavered. “Just wait a second.” Something big was on the other side of that door. Something I wasn’t ready for. It peeled away my thoughts. It knew I was coming.

“This is a mistake.” Not a bad tattoo kind of mistake. This was the kind of mistake that would burn through my being. It would hollow me out. I’d already rebuilt myself once. I couldn’t go through that kind of stripping again. “Whatever’s in there…it isn’t for me to see.”

“Then close your eyes.” She yanked the door open and pulled me through. 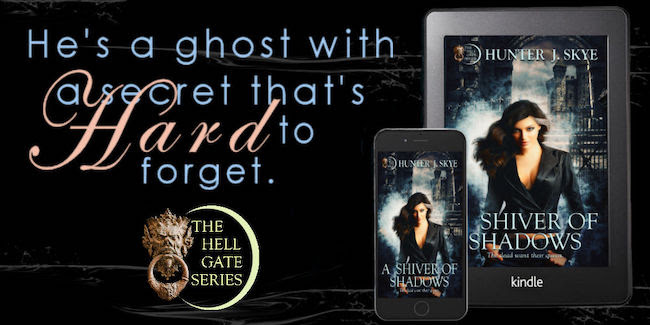 Hunter J. Skye was born with a rare nightmare disorder, and was raised in a haunted late Victorian home. Those two factors predestined her to write ghost stories. With a Bachelor of the Fine Arts, Hunter first went into museology, but her love of the written word drew her back to the keyboard. She now writes full time and paints part-time.

Hunter's debut novel, A Glimmer of Ghosts, won four RWA awards pre-publication. It is the first book in an urban fantasy/paranormal romance series set in coastal Virginia. Book two, A Shiver of Shadows, will release May 24 2021 from The Wild Rose Press.