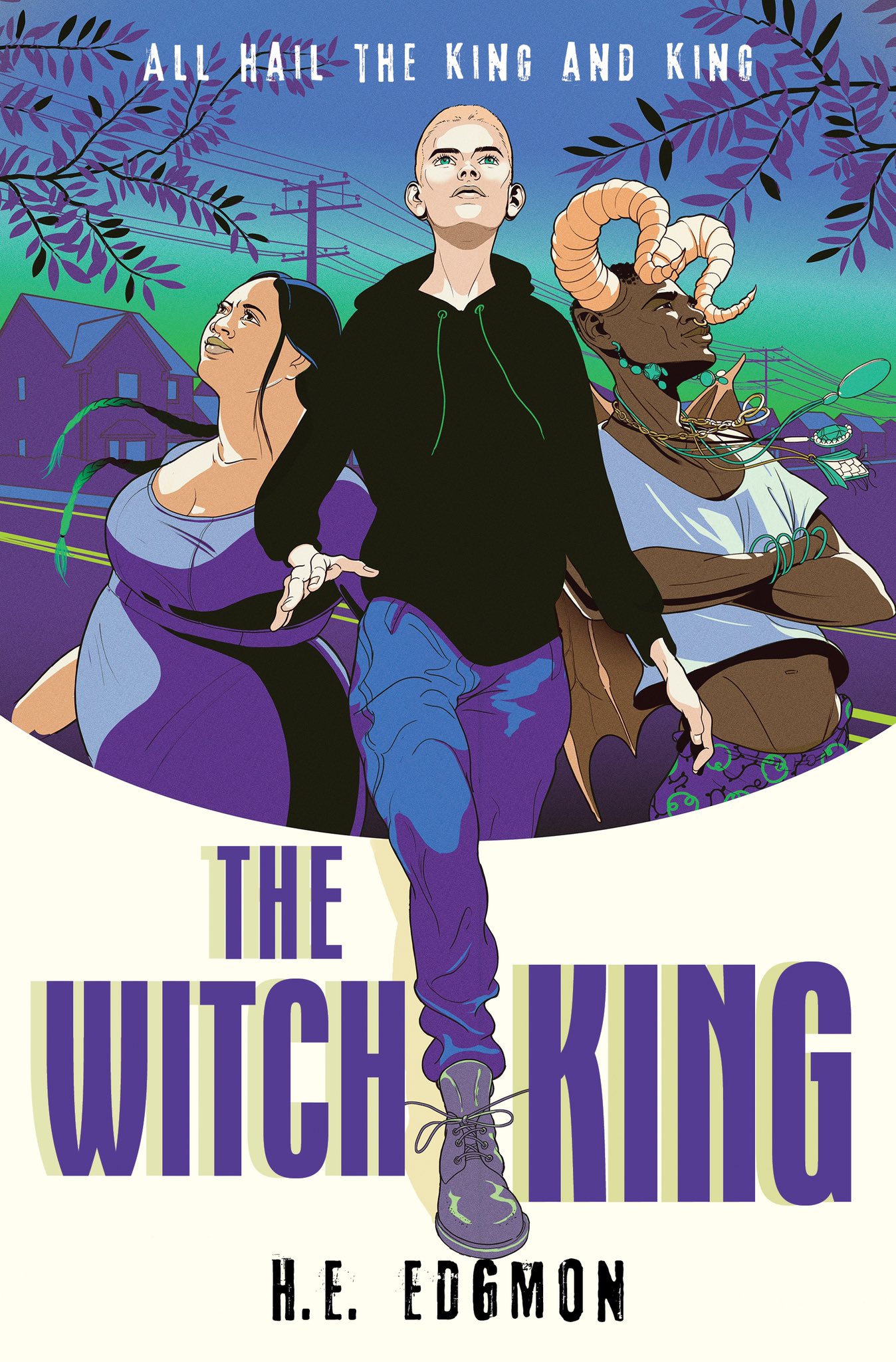 Wyatt would give anything to forget where he came from—but a kingdom demands its king.

In Asalin, fae rule and witches like Wyatt Croft…don’t. Wyatt’s betrothal to his best friend, fae prince Emyr North, was supposed to change that. But when Wyatt lost control of his magic one devastating night, he fled to the human world.

Now a coldly distant Emyr has hunted him down. Despite transgender Wyatt’s newfound identity and troubling past, Emyr has no intention of dissolving their engagement. In fact, he claims they must marry now or risk losing the throne. Jaded, Wyatt strikes a deal with the enemy, hoping to escape Asalin forever.

But as he gets to know Emyr, Wyatt realizes the boy he once loved may still exist. And as the witches face worsening conditions, he must decide once and for all what’s more important—his people or his freedom.

I’m fourteen years old and my resentment toward the fae has been growing for more than a year now. I don’t know it yet, but it’s only hours before the worst night of my life.

When I ask the question at the dinner table, everything goes silent. No more forks scraping against glass. No more persnickety sipping of blackberry wine, glasses held daintily between perfectly poised fingers. My father shakes his head, looking down at his plate with exasperation. My mother stares at me, lips parted in surprise. The glare on my sister’s too-familiar face is what rattles me most. I think, and not for the first time, Tessa would kill me if she had the chance.

“I’m just asking. Maybe it’s not what I want for my future.” “Of course not. Because being queen of the fae is just too mundane for you,” Tessa spits, batting one hank of dirty blond hair over her shoulder.

I bristle. I know if I acknowledge her, it’s going to make this fight worse than it needs to be. But I’d like to smack the hateful look right off her face.

My mother sighs. “Sweetheart, I know you must be anxious. A lot is going to change over the next few years. I can only imagine how that must feel.”

She reaches across the table to rest her warm, soft hand over top my own. I wish I could find some comfort in the touch. I wish it could make me feel anything other than trapped.

“But this is going to be such a good thing for you. The first witch to ever marry into a royal family? We’re talking about making history.”

I don’t care about making history.

“Revolutionaries usually end up getting killed by the masses,” I remind her. “No one wants me to rule. Aren’t you a little worried they’ll revolt against a witch wearing their crown?”

My mother sniffs. “People will adjust.”

“This conversation is pointless,” my father interjects, tone firm. “There is a contract in place. You will marry Emyr North or you will die.”

When my black energy sweeps out around me, it brushes up against the energies of my family. My father’s biting ice blue. My mother’s, the same shade as her favorite red lipstick. My sister’s, a perfect mix of the two—a field of lavender.

My darkness and I don’t belong here. We never have.

My mother snatches her hand back as if I’ve burned her. If I did, it was a happy accident.

“Contracts can be dissolved,” I insist through clenched teeth. “You can ask the king and queen to talk to the Court, tell them—”

“We will tell them nothing.” My father isn’t even looking at me. “What’s done is done.”

“You should be so proud,” my mother insists, shaking her head. “Most of your kind would be thrilled to take your place.”

“Then let one of them,” I snap back, fists clenching until my nails dig puncture wounds into my palms.

“For crying out loud,” Tessa scoffs, rolling her eyes. “You’re a witch. And you want to run away from the one thing that might make your life worth something? Are you seriously dumber than you look?”

I do not point out that we look eerily similar.

“Tessa. Please.” My mother sighs at her before she turns her attention back to me. “When we were made aware of Emyr’s bond, we were so excited for you. So proud. And we demanded the contract be put in place to protect you. To protect your future here. Don’t you understand why?”

Of course I do, but I wonder if my mother does. I know it’s because she’s like a hellhound on a scent, catching the whiff of power from a hundred miles away. Why does she think she did it? Does she actually think she’s the good guy here?

“When you were born, when we learned you were a witch, we were terrified of what your life might look like. We were so scared of who you would grow to be.”

“Should’ve dumped you in the human world and left you for dead,” Tessa interjects, and my mother silences her with a glare.

I’ve grown up hearing that line my entire life. How lucky I am that my parents chose to keep me, their broken little daughter, when so many of the fae abandon their witchling offspring outside the gates of Asalin. To starve to death or be eaten by wild animals, whichever should come first.

How lucky I am that my mom and dad were willing to take on the burden of keeping me around.

“Sweetheart, marrying the prince is the only thing that will save you from being like the rest of them. You don’t want to be like the other witches, do you? Don’t you want to be something special?”

As I look between their faces, I know I have my answer. Nothing I can say or do will sway them. My parents will never take my side, because they believe the way the rest of their kind believe. That the only value my life has is what I can do for the fae around me.

The terms of my engagement are clear, signed with Emyr’s and my mingled blood when we were barely old enough to spell our own names. We will be married. It’s only a matter of when. One day, the contract will finally be called in. If I’m not there to meet him at the end of the aisle, he can trigger the clause that forces my own blood to wreak havoc on me. The magic in my system will eat away at my insides until there’s nothing left, until I’m nothing more than an unanchored energy that can never move on, never find peace. The same would happen to him, if he were to break our pact.

But so does putting on a white gown and a fake smile and living the rest of my life as a placeholder in someone else’s fantasy. Being forced to produce heirs for the Throne. And what would they do to those children if they were born witches, like me? Would I be forced to keep having baby after baby until I gave them a fae? What if I never did? Would they ever let them rule? Or would the fae mob finally bubble over and do what they’ve wanted to do for a long time?

Dying because I broke the contract would suck. But there’s a good chance I’m going to end up dead because of this engagement either way.

The memory eats at me as I make my way back inside. It comes to my mind often, the last conversation I ever had with my parents. The fire happened the next night.

About the author:
H.E. Edgmon was born in the deep south but has had many homes, dropped out of school to do gay stuff, and is at least a little feral.

In both their writing and daily life, they aim to center the voices of Indigenous people, trans people, and survivors of trauma. It is always their goal to make fascists uncomfortable.

They have an eccentric little family of their own design, several very sensitive pets, and a lot of opinions. They can most often be found on Twitter. You can find out more on their website.