Blogtour: The Stepsisters by Susan Mallery 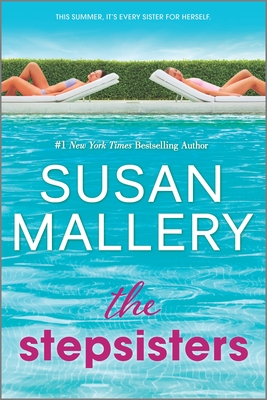 Once upon a time, when her dad married Sage’s mom, Daisy was thrilled to get a bright and shiny new sister. But Sage was beautiful and popular, everything Daisy was not, and she made sure Daisy knew it.

Sage didn’t have Daisy’s smarts—she had to go back a grade to enroll in the fancy rich-kid school. So she used her popularity as a weapon, putting Daisy down to elevate herself. After the divorce, the stepsisters’ rivalry continued until the final, improbable straw: Daisy married Sage’s first love, and Sage fled California.

Eighteen years, two kids and one troubled marriage later, Daisy never expects—or wants—to see Sage again. But when the little sister they have in common needs them both, they put aside their differences to care for Cassidy. As long-buried truths are revealed, no one is more surprised than they when friendship blossoms.

Their fragile truce is threatened by one careless act that could have devastating consequences. They could turn their backs on each other again…or they could learn to forgive once and for all and finally become true sisters of the heart.

Daisy Bosarge felt the fear that was universal in the parenting world when Krissa uttered those eight little words. Even more concerning was the fact that her son was already home with stomach flu.

She’d known better than to let her daughter go to school this morning, she thought ruefully, but Krissa had begged and Daisy had been late for work and it had just seemed easier to say yes. A decision that was getting ready to bite her in the butt as she drove as fast as she could, given the traffic on the road.

“Ten more minutes,” she said, glancing at her eight-year-old in the back seat. “We’ll be there in ten minutes.”

At least cajoling her daughter was better than trying to avoid looking at the ominous Check Engine light that had popped on right before Daisy had arrived at the school to pick up her daughter. Yet another problem she didn’t have time to deal with.

Priorities, she told herself. Get Krissa home and in bed, look in on Ben, then make an appointment to take her Mercedes to the dealership. After that, she would—

Daisy held in a moan. She carefully checked her mirrors before pulling to the side of the road.

“Just a second,” she murmured, knowing at this point there weren’t any words in the world that would keep the inevitable from happening.

Seconds later her day took yet another unfair turn as her daughter threw up all over herself, the back seat and the carpet. The smell and the sound of Krissa bursting into tears hit her at the same time.

She put on her flashers and raced around to the passenger side, where she helped her daughter out onto the sidewalk. Cars drove by so close, Daisy felt the whoosh of air as they passed. She kept hold of her daughter as she circled to the trunk, where she kept her emergency tote filled with paper towels, wipes and a shirt for each of her kids.

She cleaned off her daughter’s face, then reached for the hem of her T-shirt.

But Krissa stopped her, tugging the shirt back in place.

“No!” she shrieked, looking around frantically. “I’m outside. Someone will see.”

Someone who? Krissa was eight and the car was between them and the traffic, with Daisy blocking their view.

“Can you change in the front seat?” she asked, trying to sound reasonable, instead of close to losing it.

“No.” Tears spilled down her daughter’s flushed cheeks. “Mommy, no!”

The headache that had started a little before noon clicked up a level or two, with a steady pressure building right between her eyes. She ignored the pain and put her hand on her daughter’s forehead, feeling the heat there. Before she could figure out what to do, Krissa threw up again, this time down the front of Daisy’s scrubs and on her shoes.

Krissa’s tears increased and at that moment, Daisy really wanted to join in. She’d had a bad day at work, both her kids were sick, she was never getting the vomit smell out of her car and just because there wasn’t already enough crap in her life, her husband had moved out two days ago. To “give them both space to think,” as he’d phrased it.

Jerk, she thought, feeling the familiar fury tinged with a hint of panic. Although the real word was closer to asshole than jerk. How could he have done that to—

One step at a time, she told herself. First, she had to get Krissa home, then the car, then—

Out of the corner of her eye, she saw a dark blue BMW slow as it drove past. She wanted to yell out something vulgar to the voyeur, but knew that would set a bad example, so she instead forced a smile.

“Sweetie, let me clean the back seat so you can get in. You can change your shirt in there, and no one will see. All right?”

Daisy planted her where she could see her, then cleaned up the mess as best she could. In the eighty-plus-degree weather that was spring in Los Angeles, the interior of the car was already heating up. The smell nearly made her gag. Blood she could handle just fine. Open up a body and she was okay with that, but this? A nightmare.

She finished her work and coaxed Krissa closer to the car only to notice the BMW driving by again, but with the sun hitting the side window, she couldn’t see who was driving.

Better to ignore them, she told herself, slipping off her daughter’s school uniform polo shirt and putting on a T-shirt with Elsa from Frozen on the front. Sadly she had nothing for herself to change into. She wiped up her pants and shoes and was about to try to buckle Krissa in when the BMW pulled up to the curb behind her car.

Daisy told herself not to panic, even as she wished for lethal training in some kind of karate. Or a can of pepper spray. Was that legal in Los Angeles? Before she could decide, the driver’s door opened and a tall, beautiful blonde woman stepped out.

Daisy silently ran through all the swear words she knew, created a few unique combinations, then wanted to know why God currently hated her because there was no other explanation for Sage Vitale to be walking toward her, looking as fabulous as only Sage could in skinny jeans and a flowy top that made her appear sexy and ethereal at the same time. Four-inch-heel boots completed the look. Daisy, on the other hand, had been up since four, hadn’t showered since yesterday and hey, the vomit.

Last she’d heard, Sage was in Italy, married to a count. Because that was Sage’s life. Race car drivers and counts and being tall and skinny and beautiful. Daisy was smart and had a sparkling personality. It just wasn’t fair.

Sage looked from her to her daughter. “Daisy? I thought that was you when I drove by. Are you okay?”

No. No, she wasn’t. Any idiot could see that. Her kid was obviously sick, Daisy had puke on her pants and shoes, so no. Not okay.

“We’re fine,” Daisy said, trying not to clench her teeth. Her dentist had told her that if she didn’t learn to relax, she was going to have to wear a mouth guard at night to stop herself from grinding her teeth. She felt her bedtime routine already lacked a certain sex appeal and she sure didn’t need a mouth guard adding to the problem.

“You don’t seem fine,” Sage said, her nose wrinkling, no doubt from the smell.

“Who are you?” Krissa asked.

“This is Sage. She’s my stepsister.” Or at least she had been, once.

Krissa rubbed her suddenly running nose. “So you’re my aunt?”

“No,” Daisy said firmly. “Please buckle up so we can get home.”

For once, Krissa didn’t complain or talk back. Instead she buckled her seat belt, twisting her head to keep looking at Sage. Daisy thought about warning her of the danger of that. Sage was like the sun and if you stared at her too long, there was permanent damage.

Later she would think about what quirk of fate had her former stepsister driving by at the exact moment she was at her lowest. LA had a population of what, eight million people? What were the odds? Although she supposed they did live close. Sort of. But still!

She forced a tight smile. “Thank you for stopping. It was very kind.”

“I couldn’t believe it was you, standing there on the side of the road,” Sage admitted. “I knew you had kids, but seeing you with your daughter… It’s just strange.”

“We haven’t really kept in touch,” Daisy said, inching toward her door.

“Right. We haven’t seen each other since your wedding.”

Daisy stared at her stepsister. Really? Sage had gone there? “Yes, my wedding twelve years ago, where you announced to everyone in the room that you were still in love with the man I was marrying. It was great.”

Oh, yes it was, but Daisy didn’t want to stay and chitchat. “Thanks again.” She waved and ducked into her car.

“It’s jeans and a shirt,” Daisy snapped before she could stop herself. “Sorry. I’m tired. Let’s get you home.”

In the rearview mirror she saw Sage get back in her car. Their eyes met briefly in the mirror, then Daisy focused her attention on starting her car. She pushed the button to engage the engine…and nothing happened. The dashboard lights came on, along with the red Check Engine light, but the engine stayed silent.

Daisy grabbed the steering wheel with both hands and tried not to scream. She didn’t want to scare her daughter and possibly herself by giving in to the crazy building up inside of her but why did this have to happen?

Someone knocked on her window. She rolled it down.

“Want me to take you home?”

Daisy thought about saying she would call an Uber or Lyft or something, but figured that fate was messing with her and she might as well simply surrender. The sooner she got through whatever hell this was, the sooner it would be over. Later, when the kids were in bed and she had showered, she would review her life and try to decide where she’d messed up so much that she had to be punished. But for now, she had a sick kid and someone willing to give her a ride.

“Thank you,” she said through clenched teeth, looking into the beautiful green eyes of the one woman on the planet she hated more than anyone. “That would be great.”

About the author:
Susan Mallery writes heartwarming, humorous novels about the relationships that define our lives―family, friendship, romance. She's known for putting nuanced characters in emotional situations that surprise readers to laughter. Beloved by millions, her books have been translated into 28 languages. Susan lives in Washington with her husband, two cats, and a small poodle with delusions of grandeur. Find out more on her website, or sign up for her newsletter.
Promotional post. Materials provided by the publisher.