one of Harlequin's Summer Reads 2021 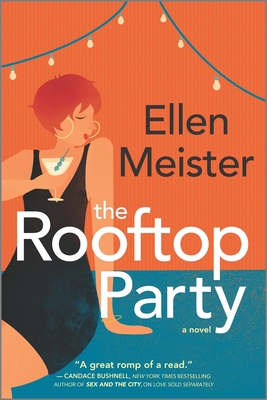 In this witty and engaging novel, Dana Barry, the Shopping Channel’s star host, stops by the company’s rooftop party to pitch the new CEO her brilliant idea that just might save the flagging business, her job and possibly her love life.

As she chats with the smarmy executive, he backs her into a dark corner. For Dana, it’s a quid pro oh-hell-no. She escapes his lecherous grasp and grabs her drink on her way to the dance floor. Woozy, she blacks out.

When she comes to, the CEO is dead, fallen from the roof. Or was he pushed? And if so, by whom? It’s hard to know, but one thing is certain: Dana was close enough to be suspect.

Sure, she loathed how the creep moved in on her, but she’s no killer. Or is she? Truth is, Dana can’t remember much about those minutes. Now she has to use all her skills to prove her innocence to everyone, including her police detective boyfriend—and herself.

Dana Barry raised her fist to knock on the door and paused. She wasn’t easily intimidated, but walking into Eleanor Gratz’s office was like trying to open an umbrella in a hurricane, and she needed a moment to anchor herself.

Not that Dana wasn’t used to stormy weather. Until she got this job at the Shopping Channel, her life had been one shitstorm after another. The last monsoon hit six months ago, when she was fired from her job at a mall store in Queens. With no acting auditions on the horizon, Dana didn’t know how she would pay her rent, let alone her student debt. So she did the only thing she could think of. She got drunk. And high. Thank god for her friend Megan, who burst in and dragged her to an open call. Now here she was, with a steady gig as a Shopping Channel host. And she was crushing it.

Dana took a breath and rapped twice on the door.

“If that’s not Anthony Bourdain with an exotic drink and two tickets to Fiji, get lost,” Eleanor called. Dana opened the door and stuck her head in. “You know he’s dead, right?”

Despite the warning, Dana stepped inside. The sun-drenched office of the Shopping Channel’s head buyer was a study in whites, grays and aqua blues. Eleanor sat behind a long desk the color of sea pearls. She was sixtyish, with shoulder-length salt-and-pepper hair, offset by hammered-silver hoop earrings. She wore a jewel-toned top with bell sleeves, bohemian-inspired but sophisticated. A pair of tortoiseshell reading glasses rested low on her nose. Through the window behind her, the Manhattan skyline flexed its might against the sky.

“You want me to come back?” Dana asked.

“Like a yeast infection,” Eleanor said, but she sighed, relenting. “Sit down.”

Dana took one of the chairs opposite her desk and the two women studied one another.

Despite her bluster, Eleanor’s demeanor was open, and Dana took a moment to reflect. She could hardly believe how long she’d been at this job without screwing it up. Usually, she’d be cleaning lead out of her foot by now and filing for unemployment. But somehow, every self-sabotaging shot had missed. So she was living the life of an actual adult, with a paycheck that covered her expenses and then some. And sure, she missed the rush of going on auditions and the thrill of getting callbacks. She even missed nursing the hurt of rejections. But she didn’t miss getting threatening notices when she was late on her student loan payments. Or being so broke she couldn’t afford tampons without a discount coupon.

So for now, her acting ambitions were on hold. (Or at least the ones she could be public about.) In the meantime, the Shopping Channel gig was so much more than she had imagined. But lately, Dana worried it could all blow away. Despite her personal success, the company’s sales were down overall. They had even brought in a new CEO, sending a ripple of anxiety through every department.

That’s why she wanted to present her idea to someone important. And sure, it might be impolitic to leapfrog her boss to talk to the head buyer about it. But going straight to Sherry Zidel with the idea wasn’t an option, especially now that the business was so wobbly. Sherry was always tightly wound, but these days her jaw was tense enough to crack teeth.

“They tell me you’re our resident action hero,” Eleanor said, “saving us all from imminent demise.” She laced her fingers, and her emerald-cut diamond ring took center stage. It was flanked by sapphires, showcased in an art deco platinum setting. The piece was tasteful despite the size, and Dana could imagine cooing over it on the air.

“Some heroes wear capes and fight crime,” Dana said, offering a self-deprecating smile. “Me? I can talk for hours without taking a breath.”

Eleanor shook her head, her expression serious. “Silly girl, you don’t even know your own superpower.”

“It’s your eye for detail.”

Dana shrugged. She’d heard that kind of thing before. She noticed minutiae on an almost atomic level. It enabled her to talk about the quality of the polished rivets on a pair of jeggings with the same gushing enthusiasm she could rally for a diamond ring.

“As long as you move products,” Eleanor said, “I don’t care what you call it.”

“That’s what I came to talk to you about—products.”

Eleanor shrugged as if to say, What else is new? People talked to her about products all day long.

Dana hoped she could break through, and leaned forward to study Eleanor Gratz’s age-defying complexion. Though her face was softening around the jawline, there was barely a wrinkle. And nothing about her appearance suggested Botox or a face-lift.

“What kind of moisturizer do you use?” Dana asked. It was a question she had formulated on the elevator. She would flatter her way in, but earnestly.

Eleanor pulled off her glasses. “I know an opening line when I hear one.”

Dana regrouped. Eleanor wouldn’t respond to fawning or manipulation. She had to get right to the point.

“Look,” she said, “I know we’re not doing as well in apparel as we used to. And Sherry is leaning on me hard. But the fact is, there’s no way we can compete with the internet. All those fashion websites—they’re creaming us.”

Eleanor snorted. “With cheap rags. Made with cheap Chinese labor.”

“Disposable clothes held together with spit and a prayer.”

Dana nodded, agreeing. “They can’t touch us on quality, but that’s hard to demonstrate on TV. Skin care, on the other hand…”

“Why not? I can sell it, Eleanor. I know I can. All I need is a couple of models and a tight shot of disappearing crow’s-feet.”

Eleanor laughed. “Honey, you really think this is an original idea?”

“I don’t know if it’s original. I just know I can make it work.” She had been studying the industry giants—HSN and QVC—and knew that any product with a strong demo moved like beer at a frat party.

“Twenty years ago, when this was still a young company, I brought in a skin care line and it was a disaster.”

Dana straightened her back. “Maybe it wasn’t the right time or the right host or… I don’t know. Point is, twenty years is a long time. It’s worth another shot, don’t you think?”

“Which is why I’ve been pitching the idea every few years. But the board always knocks it down. It’s like they have PTSD from one loss on the books two decades ago.”

“What about that hand lotion Kitty used to sell?” People at the Shopping Channel rarely brought up Kitty Todd—the former star hostess who was found with a bullet in her head—but this was important.

Eleanor waved away the comment. “That California Dreams crap? It was a loss leader. The board holds it up as further proof we would always fail at skin care. I’m telling you, they’re dug in.”

Dana considered this as she pictured the man now occupying the largest office in the company. He had the look of an aging preppie, with a full mop of white hair and webs of burst blood vessels on his nose and cheeks. Evidence, she assumed, of a hard-drinking past, though today he seemed as sober as a judge.

“He was brought in to shake things up, wasn’t he? Maybe this is just the—”

“Trust me, Dana. I’d never get anywhere with Ivan…” She trailed off, as if she were burrowing deep inside an idea.

Eleanor pursed her lips in thought. After a few beats, she lowered her head as if confiding something. “Dana, there’s a particular kind of man to whom women become invisible at a certain age. We’ve served our usefulness, and now we’re dispensable. Ivan Dennison wouldn’t hear me if I came in with a bullhorn.”

“You?” Dana asked. Eleanor was such an imposing presence this was hard to imagine.

“Trust me, I could burst into flames and he’d lean forward to light his cigar.”

Dana squinted, struggling to understand. “If he’s such a sexist, why did the board—”

“Because they’re desperate, and he’s a ruthless fuck.”

Dana sat back and tried to reconcile this description of Ivan with the friendly man who had been introduced to her on set. He’d been flattering and collegial, conspicuously straitlaced. The sort of man who found a way to work his marital status into every conversation with a woman.

“He seemed nice enough to me,” Dana said.

Eleanor indicated the entirety of Dana’s lanky twenty-nine-year-old appearance with a sweep of her hand. “Of course he did.”

“What if I pitched him the idea?” Dana asked, energized. “He seems to like me.”

“He probably wants to bang you.”

“So what?” Dana said. “He’s got this whole choirboy vibe going on. Like a born-again something-or-other. I don’t think he’ll come on to me.”

About the author:
Ellen Meister is the author of  several novels including LOVE SOLD SEPARATELY,  DOROTHY PARKER DRANK HERE; FAREWELL, DOROTHY PARKER; THE OTHER LIFE and others. Ellen is also an editor, book coach, ghostwriter, and frequent contributor to Long Island Woman Magazine. She teaches creative writing at Long Island University Hutton House Lectures and previously at Hofstra University. Her latest novel is THE ROOFTOP PARTY.
For more info visit her website.