In Heather Truett’s Kiss and Repeat, a teen uses the scientific method drilled into him by his scientist father to begin a kissing experiment. Only the experiment gets messy, and Stephen will have to come clean if he wants to win one girl’s heart in this heartfelt and funny YA debut. 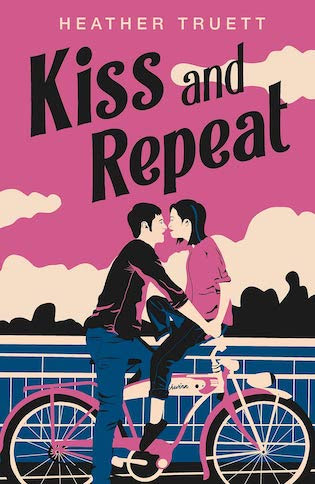 Stephen Luckie isn’t so lucky in love. He’s completely inexperienced when it comes to girls, and wonders if his tics – caused by Tourette’s Syndrome – are the reason.

Then a game at a party reveals that his body goes still while kissing. Using the scientific method drilled into him by his scientist father, Steven begins the best experiment ever–one that involves kissing as many girls as possible. Who knew science could be so fun?

But when the experiment gets underway, Stephen begins to question how he treats girls – and if his tics have been standing in his way at all. With two girls interested in him, he has to figure out what really matters to him and what he’ll risk – and gain – by being his true self.

“Wanna bike Lost Bridge today?” I asked Ballard before biting into my sandwich.

I have to study,” he said. “Chem quiz tomorrow. But we need to talk soon. I’ve been working on a plan for our kissing experiment.”

As if on cue, Case glanced up, caught my eye, and said, “Luckie got lucky,” with a grin.

I flipped him the bird and turned back to Ballard. “No, I’m not going to kiss a bunch of random girls. I’ve heard ‘Luckie got lucky’ enough to last a lifetime.”

I wanted to trust him. I first met Ballard in the guidance office. He was in trouble for goofing off, nothing unusual, and I was visiting a counselor about something in my 504 plan. A 504 plan is the pile of papers outlining different ways I get help because of Tourette’s syndrome, like being allowed to take my exams in the library, away from other kids. My processing speed and style is different than a typical student’s, and I have a lot of trouble blocking out sensory stimuli. I know it looks like “special treatment” to a lot of people, but those people have never lived inside my head.

Anyway, Ballard asked me straight up, “Why do you keep flinging your arms out?”

I told Ballard I had Tourette’s. He said, “That sucks.” I appreciated the assessment. No pity and no making fun of me. A week later, we ran into each other in the old mall parking lot, both of us using the decrepit sidewalks as bike paths.

We’ve been friends ever since.

So, I wanted to trust him, but I’d learned not to trust any- one with a “great idea” sure to get me in trouble. I always get caught doing the stupidest things. It’s never worth it.

Example: The worship pastor’s daughter, Erin Mielke, once convinced me it would be fun to light all the candles at church and play séance while our parents were in a meeting. The old lady who found us about had a heart attack.

“You never want to ride anymore,” I complained, crumpling up a soda can and ignoring his appeal for trust.

“We’re getting too old for bike riding.” He shoved a fry into his mouth and I sighed. I didn’t feel any older than I did sophomore year, and we rode our bikes plenty then, but at least we were off the subject of kissing experiments.

Heather Truett is a novelist and poet. She is currently an MFA candidate at the University of Memphis. She is represented by Hilary Harwell of KT Literary.