Blogtour: Up In Smoke by Annabeth Albert 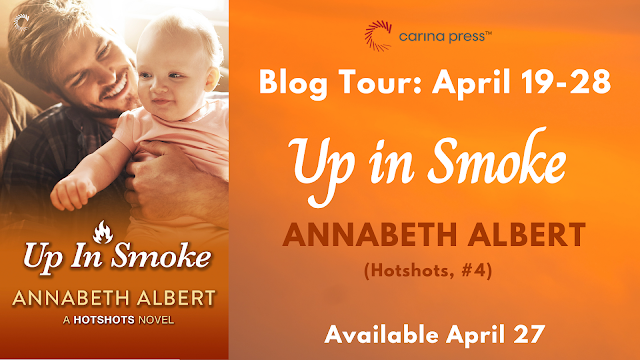 Please welcome Annabeth Albert as we kick off the blogtour for
Up In Smoke
Hotshots #4
Three Men and a Baby meets Backdraft with explosive chemistry and heartfelt feels. 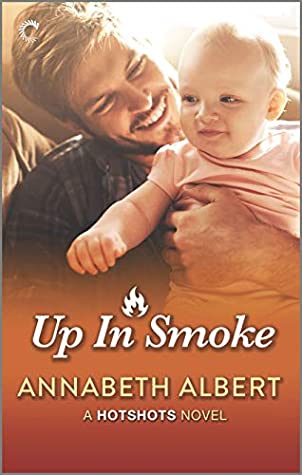 Freewheeling smoke jumper Brandt Wilder thrives on adrenaline. He’s never met a parachute he can’t repair or a dangerous situation he couldn’t wrangle his way out of. He’s popular and fun-loving and not at all looking to settle down or form lasting relationships. It’s a lifestyle that’s served him well…right up until the day he finds a baby on his doorstep.

Shane Travis is used to putting his country music career—and his own happiness—on hold after his sister rolls through his life. Like last spring when she convinced him to try skydiving for his birthday—and she walked away with the hot parachute instructor.

Now he gets to deliver the piece of news that will upend Brandt’s carefree life: he very well might be a dad.

Shane’s niece is safe in Brandt’s strong, capable hands, but too many questions remain unanswered. Co-parenting while they sort it out leads to late-night talks, and soul-bearing confessions lead to a most inconvenient attraction. Still, Shane can’t leave this makeshift family behind—even if it means playing house with the one man he can’t resist.

Brandt’s deep chuckle rumbled straight through Shane. Damn. This was torture. Then the other man wrapped an arm around Shane, positioning his muscled forearm where Shane could see his fancy-looking watch gadget. “Now this is my altimeter. It tells me when we’re at five thousand feet and ready to deploy the chute.”

“Got it.” Shane wasn’t about to study that meaty arm any more than he absolutely had to.

“Okay, it’s go time.” Dallas’s voice echoed though the room. Brandt quickly unclipped them, but as soon as he stepped away, Shane’s pulse kicked up. Maybe he couldn’t do this. Jump out of a plane? Who was he kidding? He was a ground dweller, through and through.

Right when he was about to turn away, though, Brandt grabbed his biceps. “Nerves hitting you? Trust me. You’ll be just fine. I haven’t lost a jumper yet.”

Shane barked out a laugh. “Not exactly making me feel better.”

“Listen, I can tell you all day about how awesome this is.” Brandt looked him dead in the eyes, gaze serious for once, all his charm turned to raw intensity. “But until you do it, you’re gonna think it’s all BS. Sometimes you gotta take a leap of faith.”

“Not very good at those,” Shane admitted quietly as he stepped free of the other guy’s grip. He couldn’t keep meeting his eyes either. Too much power there, like a shot with an extra kick.

“Okay. You want me to tell Dallas you want out?”

A yes was right there on the tip of Shane’s tongue, but then he heard Shelby’s laugh ring out. She’d love it if he chickened out. Not only would she get bragging rights for all of eternity, she’d get what she’d wanted and get to go with Brandt. And for whatever reason, Shane hated that most of all. “Nah. I’m going.”

He white-knuckled his way out to the small plane, spared a nod for the female pilot, and squished his eyes shut until Shelby jostled him into looking at the valley underneath them, the green canopy of the national forest contrasting with the pristine blue sky. Random snippets of lyrics danced through Shane’s head, ways that he might try to describe this view. But then, right as he was settling into something resembling comfort, everyone started shuffling around, getting ready to go. The wind rushed in as the hatch opened, and a full-body shiver raced through Shane.

Then Shelby gave him and Brandt one last coy grin before she and Dallas were away, her whoop echoing across the sky.

“Ready? Here we go.” Brandt nudged Shane closer to the open hatch. Shane wanted to say no, wanted to drag their clipped-together bodies back inside the plane, wanted to both hurl and yell. But in the end, all he could do was nod. Only one way down.

His knees had locked up even as his thighs trembled. Behind him, Brandt was sure and solid. He could push Shane out the hatch pretty easily, but he didn’t. He was letting it be Shane’s choice. And somehow that patience and restraint gave Shane a jolt of courage. One step into nothingness. That was all it took.

Brandt was right behind him, smooth as if they were on a dance floor, not open sky. And now they were falling. Falling so fast. Faster than a car on the interstate with the windows all down, faster than a dirt bike on a steep incline, faster than the whoosh down a water slide. There was no describing the feeling of the wind on his cheeks, the roar in his ears, the shout that probably belonged to him, the adrenaline that crashed through him as he tried to remember what they’d practiced about positioning. Damn. Hard to think.

Which was funny because that was the one thing he was good at. Shelby was forever teasing him about overthinking. But now, his brain couldn’t even pull two words together as they rushed through the air. Brandt yelled something, but Shane was too busy hurtling through the sky to focus on it. And then he was pulled backwards, a hard yank as the parachute deployed. No more freefall. And the oh-my-God-about-to-die adrenaline quieted enough that he could look down, really look.

“Beautiful, isn’t it?” Brandt’s voice was deep and rich, like warm honey over Shane’s still jangling nerves. Now that the air wasn’t rushing so fast, he could hear him better. Almost too much better, because it felt like they were soaking up each other’s awe and wonder. Sharing something warm and tender and perfect.

“Nothing like it.” Brandt whistled low, a sound that hit Shane somewhere soft. “Never gonna get tired of this view.”

“Me either.” Shane almost didn’t recognize his own voice, up this high, this far removed from everything that usually weighed him down.

“Hey, Superman. You want a turn steering?” Brandt didn’t wait for Shane to reply, grabbing his arms, guiding his hands.

“Whoa. Wow. I’m doing it. Look at us.” They swooped gently from side to side, and it was quite possibly the best feeling Shane had ever experienced.

“Look at you. Didn’t know your smile muscles even worked.”

“Screw you. I can smile.” Shane was feeling so good that he had to laugh.

“Well, then get ready. The landing crew will snap your pic as we land. It’s your rock-star moment.”

“Feels like it,” he said right before Brandt took over and set them down softly in a clearing, barely even jarring Shane’s knees. “Damn. That was…”

“It was something.” Brandt was looking right at him, like he could see straight through Shane’s layers, strip him bare. And Shane held his gaze, held the moment as long as he could.

Emotionally complex, sexy, and funny stories are her favorites both to read and to write. Annabeth loves finding happy endings for a variety of pairings and is a passionate gay rights supporter.  In between searching out dark heroes to redeem, she works a rewarding day job and wrangles two children. Find out more on her website.