ARC Review: We Have Till Monday by Cara Dee 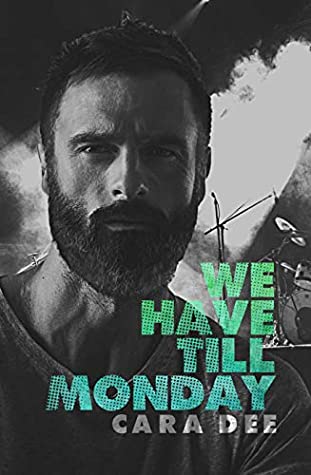 When it seemed like everyone around Anthony Fender was reaching a goal or falling in love, he blamed an early midlife crisis for throwing him far outside of his comfort zone. Nashville was a long way from New York and his everyday life that’d lost all color lately.

Hopefully, this vacation would reenergize him, and maybe a cooking class with celebrity chef August King could end Anthony’s reign as the only Italian in Brooklyn who couldn’t boil water. But when he met August and his much younger husband Camden, every plan and all rational thought flew out the window. Their dynamic grabbed hold of Anthony and reeled him in before he even heard the magic word.

This book is not for everyone. You can easily come to that conclusion by reading the blurb. But if you decide to dive in - either because the tropes are appealing to you, or because they are some of your favorites or simply because you just want to try something new - you'll find a little gem hidden between these pages.

The prologue is the only part written from Camden's point of view and it achieved what I think it was its purpose. By being inside Camden's head for a little while, the reader gets to understand how he thinks. They see the situation from the inside and aren't afraid of Camden and August growing apart once Antony gets in the picture.

Camden and August have been a couple for six years, they are solid and very much in love. But their relationship is based on kink and they want that kind of dynamic to be present as much as possible. It's something they practice in their everyday life and not just once in a while or something reserved only for scenes.

They are happy together but the nature of their relationship is such that sooner or later they'd have to add another partner to their dynamic so that all their needs are met.

Camden is smart like that and he knows it's time to find that missing piece, despite August being reluctant. His reluctance though comes from him being afraid of hurting Camden or them loosing what they have and not from disagreement. He knows that Camden is right, he knows they have to add someone to their relationship, he's just not strong enough to make that decision and take that step first.

So Camden sets in motion his "evil genius plan".

The rest of the book is entirely told from Anthony's point of view. I liked him and I liked his voice. Not once did he assume that he was going to come between the couple, he knew his place and he respected their connection and their history. He was careful to get everything right while he navigated that new dynamic for the first time.

There was a sense of equality here that's usually missing from triad stories. Where usually one seems like he gets all the attention or one seems less important than the other two, here that was never an issue. There was never a sense of this story being about two people. It was about three and it was always clear. Even in the scenes where Antony interacts with only one of the couple, the other is present through their conversations. At the beginning, Anthony was always very aware of the boundries and of himself being a temporary addition to an established couple's life. He treated them as a team while on vacation in Nashville and he never tried to separate them or showed preference to one of them.

The epilogue was exactly how this story should have ended. Because the main story takes place in the span of about ten days, the epilogue was absolutely perfect. It contains scenes throughout their life up to a few years down the road. It was so good to see how they managed to work things out and how they organized their life together.

As I reached the last page I realized that I couldn't stop smiling. That fact alone is testament enough to how much I enjoyed "We Have Till Monday". But it's not just that, this story is about people, about relationships that change and evolve, about developing feeling when you least expect it and about making room in your life for what matters the most. And that's why I loved it.