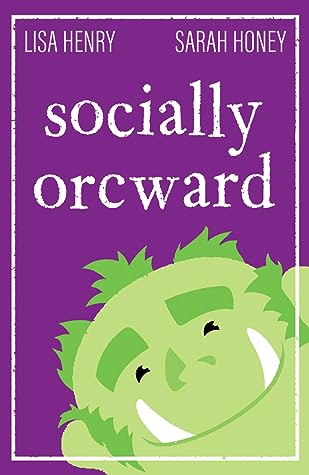 Dave is a simple orc with a simple life. He has his dragons, his music, and his friends, and that’s mostly enough. Sometimes though, he gets lonely and wishes there was someone he could share his interests with—maybe even someone he could hold hands with, although he knows it’s not likely that there’s a special person out there for someone who’s seven feet tall and green to boot.

So it’s a delightful surprise when Simon Perrin, the new kitchen boy, not only knows all about dragons, but seems to like Dave as much as Dave likes him back. But all is not what it seems, and Simon is hiding a dark secret. There are sinister forces at work, and Simon needs to find a way out of the situation he’s trapped in. If he doesn’t, it could mean disaster for the entire kingdom of Aguillon, and an even more terrible fate for Pie, Dave’s beloved fingerdragon.

When Dave discovers Simon and Pie are in danger, he’s swept up in a rescue mission that spans an ocean, tests a friendship, and has more dragons that you could poke a lute at. It’s going to be a wild ride—literally.

Asexual Orcs! Cuddly dragons! Plus, eggs and spinach! Yup, it's all here in Socially Orcward.

I'm really into this adorable little series by Lisa Henry and Sarah Honey. These fluffy, easy reads are just immensely enjoyable, and Socially Orcward was no different.

I haven't read too many books where both MCs were asexual, so this book was exciting for me. Truthfully, I'm happy that these authors didn't make Dave sexual... I mean... tusks and green skin? Plus, Dave is adorably innocent and often clueless. However, though the sexual content of this book was zilch, the squishy feelings are there in full force.

I really enjoyed the fun plotline and sweet nature of this story. It was so PURE. Just adventure and hand holding and some bad guys and LOTS of dragons. I fell in love with all of the characters, and I didn't want it to end.

One of my favorites in the series (but best read in order and not as a stand-alone), Socially Orcward was a fun, surprisingly romantic romp.