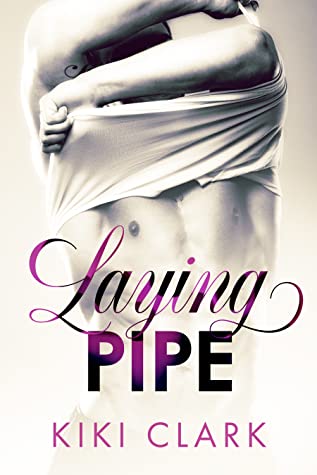 Being in love with your dad’s best friend is a recipe for loneliness.

Trust me, I know.

But I can’t help it. How can I not fall for someone as sweet and caring and attractive as John? Especially after he comes and fixes a leaking pipe in my basement. No questions asked. Just shows up, flashes his knee-weakening smile, and leaves.

Afterward, I notice John watching me with heat in his eyes sometimes. John, who’s only ever dated women, can’t seem to figure out he isn’t supposed to stare at certain parts of my very male body.

I know my dad won’t like it if he finds out, but we’re both adults. If there’s a chance I can have something real with John, I have to go for it.

This was my first book by Kiki Clark but I have a feeling I'll read more from her in the future.

An age gap romance with a father's-best-friend trope. When I read the blurb I thought we were in for some angst and awkward situations, but as it turns out, I was wrong. Laying Pipe is a sweet story about a couple falling in love when they didn't expect it, with a side of bisexual awakening.

I liked that there was no coming out drama. Lukas was gay, out and accepted by his family and his co-workers. John though of himself as straight at the beginning of the story, but there was no drama from others when he realised he also liked guys.

My main issue with this book is that it was maybe a little too sweet and there was basically no conflict about anything. Everything got resolved very quickly and with minimal fuss.

With that being said, Lukas as a character was very well developed and I liked him a lot, of course that maybe had something to do with his love for animals and one skittish little creature in particular. John's character was more simple but he was also nicely developed.

I felt uncomfortable about their behaviour during the family vacation, but I don't want to give away any spoilers so I'm not going to elaborate on that.

The main angst point in the whole story was how they were going to reveal their relationship to Lukas's parents and to be honest that's what had me the most curious since I read the blurb. But as I said already, this is a sweet book so that part followed along those lines as well.

My favourite character was without a doubt Ruby. I love it when authors give thought to develop pets as characters and they don't just use them as props.