Please welcome Stella Shaw with
Rick
Love @ The Haven #2
A gift of a man for one night. The promise of so much more. 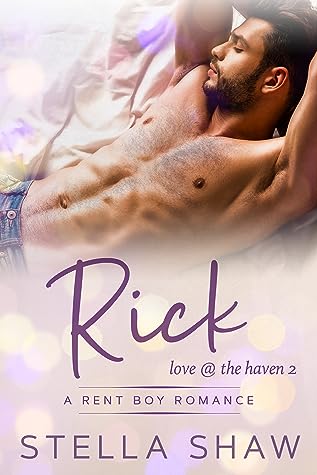 When Rick Thatcher’s beloved aunt leaves him the run-down Haven Hotel, he’s amazed to find a group of young men running an escorting business out of it. Intrigued and impressed, he allows them to stay. But sacrifices have to be made to keep the hotel running. The hotel is always short of funds, and the guys… they’re sexy, they’re fun, they’re loyal friends. But they can also be a bunch of trouble. Rick has no time left for romance.

Until the night Eliot Walker arrives at the Haven, naïve but brave, looking to discover what it’s like to be an openly gay man at last. He wants to spend the night with a man, one who can excite and guide him. But an escort? He’s nervous of what he’ll find.

He finds Rick. Just the kind of man he’d choose to have his first experiences with, if it was possible. And from Rick’s point of view – on this one special night, and for this one special man he can’t take his eyes off – why shouldn’t it be?

If only this could be more than one night. But their potential happiness and the Haven’s security may already be under serious threat.

“Here we are.” Rick had stepped a few feet away, his key card snicking a door

open for us. It seemed to be the only guest room along this corridor. I didn’t see a
number outside, but I supposed if anyone would know it was the right place, that
person would be Rick. And when he gestured for me to enter first, I knew it was, too.
It was homely, more like a living room than a generic hotel bedroom. Not lavish, or
big enough to be a suite, but the large double bed was tucked neatly over by the
window, leaving enough space for two deep armchairs in front of a small, recessed
fireplace. A side table had some bottles of wine and beer placed neatly on it, also
glasses, books, a fruit bowl, and even some bars of chocolate. The fire wasn’t lit, but
the remnants of ashes nestling in the corners proved it was used, and there was a
thick rug in front of the hearth. I assumed the closed door on the far side of the room
led to the bathroom, and everything was decorated in muted shades of brown and
green. The ceiling was high, giving a lovely sense of space, and if the thick velvet
curtains were fully opened, I could imagine the large window would offer a generous
view over the back garden. When I strained to listen, I could hear occasional traffic in
the distance, but otherwise there was a sense of calm and quiet in here that felt like
sanctuary. These houses had an old-fashioned grandeur, even when they’d been
converted into hotel and flats, something that modern London buildings could no
longer match.
“This is a lovely room.” I didn’t know what I’d expected, but Rick looked pleased
with my reaction as he helped me out of my jacket.
“I hoped you’d think so. Make yourself comfortable.”
I hesitated, not sure what or where he meant. In the chair? On the bed? Rick
stepped up behind me. I heard his boots tap on the wooden floor, smelled the citrus
tang of what must be his soap, felt his warm breath on the nape of my neck.
I took a deep breath and reached for the buttons of my shirt. “Let’s get going,
then.”
My heart wasn’t just beating fiercely now, it was crowding into my throat. At the
same time as my shoulders seemed to have locked rigid, my legs shook as if they
wouldn’t hold me any longer. I was vividly aware of him, goosebumps springing up
all over my skin. His smell and touch promised everything good.
But I was so far off being sexually excited, it was a joke. My arousal had dimmed,
my erection flagged. Any idiot would realise I’d completely frozen. What on earth
would Rick think?
However, he didn’t stop behind me. He walked around until we were face to face,
took my hands in his, and smiled that same smile, as if my abject failure didn’t really
matter.
“I’m sorry. Fuck. How pathetic. I don’t know what to do,” I said weakly.
“What you do, is sit down for a while,” Rick said, in that calm way he had. “And
we’ll have a drink and a chat.”

Stella Shaw is the penname for an author of MM romance. Her new Rent Boy Romance series: Love at the Haven launched in January 2021.

a Rafflecopter giveaway
Promotional post. Materials provided by the author.
Posted by Sandra at 12:00 AM