Please say hello to Tara Pammi with
The Surprise Bollywood Baby
Born Into Bollywood #2
a Harlequin Presents novel
Bollywood is in for a shock when these ex-lovers are bound together
by their baby in this emotional pregnancy romance by Tara Pammi. 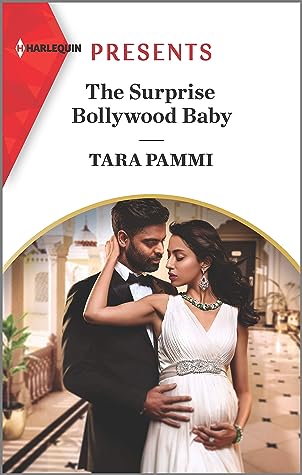 Falling for a Bollywood superstar…

…leads to the shock of a lifetime!

For actress Zara Khan, a pretend romance with an old flame, director Virat Raawal, is the ideal story to feed the press—and halt her family’s attempts to marry her off. But after sparks reignite one scorching night, she has a very real pregnancy to go with their fake relationship…

Virat is determined to do the right thing and claim Zara as his wife. He offers her everything in the world…save for the heart that he’s locked firmly away. The trouble is, Zara will only wed for love!

She was up to something.

Zara Khan, actress extraordinaire and astute businesswoman, should be firmly embedded in his distant past but kept shimmering like an enticing beacon in his present. No, strike that. She was more like a niggling thorn lodged in his skin.

And damn it all to hell, but Virat Raawal felt every inch of him practically vibrating with an anticipation and excitement he hadn’t tasted in a long time. He ran a hand through his hair, cursing his tunnel focus on his current project for the last eighteen months.

From the moment he had stepped into the banquet hall and found her watching him with undisguised attention, Virat had known something was afoot. Tracking his every move from that wide-eyed gaze. Making his skin prickle with awareness.

She couldn’t have been more obvious if she’d thrown herself at him—all grace and curves and self-confidence oozing out of every inch of flawless skin she revealed.

No wonder his long-denied libido was now wagging its tail like an excited puppy at the sight of a much-coveted fancy treat.

Because that was what Zara was to him. A delicious treat that made him act like a man barely out of his teens, riding the roller coaster of horniness and emotional turbulence all over again.

Even after all these years. Even after he’d reminded himself countless times that she’d made her choice a long time ago. That she’d left no doubt as to whom she preferred, between the famous Vikram Raawal—the uncrowned king of Bollywood who’d slogged night and day for years, to save his family and the prestigious Raawal House of Cinema from dire straits—or him, Virat Raawal, the man whose questionable paternity was always a fan-favorite topic of conversation on the weekly chai-and-chat shows.

In the decade since she’d used him to climb up the ladder of success, Virat had built up a reputation both within the industry and with the critics—a reputation that his grandfather and cinema visionary Vijay Raawal had garnered more than half a century ago. A reputation and a body of work that had every artist in the industry salivating to work with him.

Even though they’d regularly butted heads on the direction of the family’s production house, Virat had always had Vikram’s support. The brothers’ bond had been borne out of their parents’ incapability to provide them with a modicum of emotional and mental stability in their lives. So Virat had actively worked on not letting the bitterness of Zara’s choice or her long-standing relationship with his brother rot the bond between himself and Vikram. And he’d succeeded for the most part.

While he’d never understood their relationship, he’d left it alone. And now, with his brother about to marry the lovely Naina and the resulting nasty rumors about Vikram breaking Zara’s heart, Virat had been thinking a lot more about their purported, decade-long relationship.

Tucking his hands into his trouser pockets, he absently nodded at some comment on his left when the subtle hint of Zara’s scent hit his nostrils. Virat stiffened, as if bracing himself against an oncoming attack. He didn’t have to turn and look at her to know that she had sidled up to him, closer than a woman he hardly ever talked to in ten years should have done.

Her bare arm rubbed up against his, the warmth of her curvaceous body a teasing caress. Virat scowled and was about to ask her what the hell she was up to when the roaming strobe light focused on them both and a cheer went up around the hall.

An announcement flashed on the huge screen propped at the top corner next to the stage just as a short, bespectacled woman announced his and Zara’s names together as the primary investors in the web mag, calling out giveaways including and not limited to scholarships for female junior college students, a featured monthly charity drive for innovative small businesses from around the country’s rural villages, and an opportunity for the chosen SuperWoman of the month to meet Zara and Virat. As their schedules allowed, of course.

“Shall we, darling?” Zara said then, loosely linking her arm through his, in that husky voice of hers that he could recognize in his sleep.

He turned his head to look at her then, beyond stunned. And Virat knew that everyone in the hall was watching them, with the same wide-eyed fascination that Zara was faking as she looked at him.

As if he was the answer to all her dreams and wishes.

Their gazes met and the world around them seemed to stand still. With her silky hair in a soft cut framing her sharp-angled face, Zara was the consummate actress. Her eyes shone with some inner resolve he couldn’t read and the smile she offered him was wide and not in the least bit awkward. The lush lower lip painted a soft pink taunted him.

With her palm pressed to his chest, she winked at him and pouted. His blood pressure went up another notch, shock and desire twining into an inseparable rope. “I know you don’t like PDAs, sweetie, but you promised to do this with me, remember?” Her thigh bumped against his when she leaned closer and it was a miracle that he didn’t jump away like a scalded cat. Or more like an outraged heroine fending off the caricature villain in one of his brother’s latest box-office hits.

He noted the flare of awareness in her eyes before she pulled back. Reaching for her waist, Virat twirled her out of earshot of the rest of the group, keeping his own expression mildly amused. She came as easily as if she were floating on air, her face barely betraying her shock. He pushed her against the far wall, and the circle of light followed them.

“Now what the hell are you playing at, shahzadi?” he whispered, while she clasped her hands at the nape of his neck. The slide of her soft fingers there sent tension and desire rolling through him in fast waves.

Her breath was a silky caress against his jaw as she whispered, “It’s all for a good cause, Virat. Play along, won’t you?”

“Play along as what? Your latest boy toy?”

Tara Pammi can't remember a moment when she wasn't lost in a book, especially a romance which, as a teenager, was much more exciting than mathematics textbook. Years later Tara’s wild imagination and love for the written word revealed what she really wanted to do: write! She lives in Colorado with the most co-operative man on the planet and two daughters. Tara loves to hear from readers and can be reached at tara.pammi@gmail.com or her website.