The friendship of four young ladies has created an indestructible bond to protect one another from the perils of love and marriage... 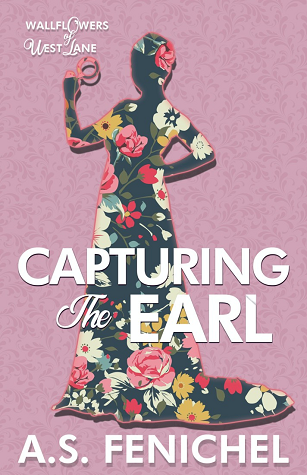 After the demise of her friend's disastrous marriage, Mercedes Parsons isn't about to let the widowed Wallflower of West Lane, Lady Aurora Radcliff, undertake another perilous trip to the altar. At least, not before the bridegroom-to-be is thoroughly investigated. If only Mercy could stop her uncharacteristic daydreaming about Wesley Renshaw's charm, his intellect, his dashing good looks. After all, the earl has already set his sights on her best friend! She must keep her wits about her and avoid giving into temptation.Wesley is both irritated and intrigued by the machinations of Mercy—He cannot let her cleverness and beauty distract him. He needs to marry her friend, Aurora, so he can reclaim his family's ancestral home. A wrong he has hoped to right his entire life. Besides, who is penniless spinster Mercedes Parsons to decide whom he can and cannot marry? Yet while he admires her unwavering loyalty to her friends, he decides it's high time the misguided woman had a dose of her own medicine. Two can play at this spying game. But they are both embarked on a dangerous charade. And it won’t be merely Mercy's reputation at risk—or her heart on the line—as Wesley comes to the inescapable conclusion that he has found the right woman at exactly the wrong time.

I’m so happy to be here. I thought we might delve into one aspect of Mercedes “Mercy” Heath the heroine in Capturing The Earl, book three in The Wallflowers of West Lane.

One thing I love to do in my books is create fully fleshed out characters that do more than fall in love. I know it’s a romance novel, but people do more in their lives than find a mate. I like them to have a business, a hobby or a passion that shows more about who they are. I’ve written books where the hero is concerned over a coal mine or the heroine is required to save a family from ruin. I love for them to have interests outside of their heart’s desire. Poppy in The Earl Not Taken loves to curse but as a lady she can’t really curse so she makes up her own profanities and they all are based in mythology. For example, “Hades Breath” might be an expletive she’d use.

In Capturing The Earl Mercy Heath is a gifted musician. She loves music, plays at least six instruments and becomes emotionally moved by a well played or well written piece. It made her more interesting than just an orphan who needed to marry well. In fact, she has a way to not marry at all and still survive if that’s her choice. But that’s another story.

Mercy becomes emotional on several occasions during the story either when at the theatre and listening to music or while playing. She gets the honor of playing a Stradivarius violine, which would be a thrill for any musician. She also plays a guitar. Now, guitars were not common in the early nineteenth century England, but Mercy received one from her aunt who traveled in Spain where they were invented. The gift was welcomed and Mercy scouring the countryside to find someone to teach her to play. Luck for us, we get to “hear” her play several times in Capturing The Earl.

A.S. Fenichel (Andie) gave up a successful IT career in New York City to pursue her lifelong dream of being a professional writer. She's never looked back.Andrea adores writing stories filled with love, passion, desire, magic and maybe a little mayhem tossed in for good measure. Books have always been her perfect escape and she still relishes diving into one and staying up all night to finish a good story.She is currently writing Regency romance for Kensington Publishing and you can learn more about Andrea's books at her website or visit her on her Facebook page, where she spends entirely too much time.

Originally from New York, she grew up in New Jersey, and now lives in Missouri with her real life hero, her wonderful husband and a fussy cat . When not reading or writing she enjoys cooking, travel, history, and puttering in her garden.