Blogtour: This Is Not The End by Sidney Bell 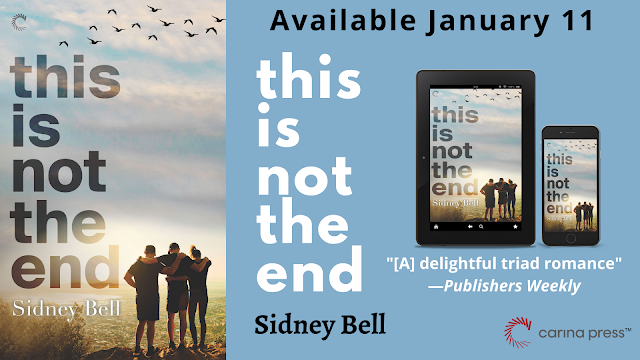 Please welcome Sidney Bell with
This Is Not The End
a Carina Press title
Sometimes love finds you when you least expect it. 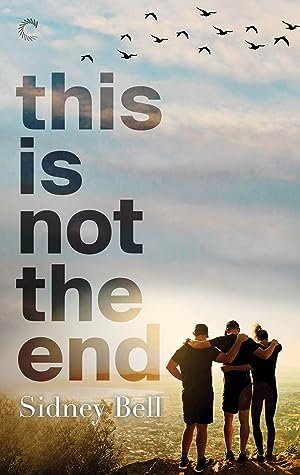 A bold and deeply emotional novel, This Is Not the End marks a new way of looking at love, family, and happily-ever-after.

Zacary Trevor is the love of Anya Alexander’s life. Their sometimes tumultuous marriage has survived ups, downs, and all the in-betweens. With successful careers, a lovely home, and a beautiful child, domestic bliss is a hard-earned reality for two people whose hedonistic days are in the not-so-distant past. They’re happy.

Enter Zac’s best friend, the deeply reserved Cal Keller. Zac’s friendship with Cal is the foundation of his career and—until Anya and their son came along—the most important relationship of his life. Cal’s a cipher, someone Anya can’t help but gravitate to, even if they don’t always get along. Even more, she’s drawn to the Zac she sees when he’s with Cal—a careful, cautious version of her husband, someone with hidden thoughts and desires kept secret even from her.

Zac should say no. He knows he should. But he doesn’t. From the first, the hint at the life the three of them could have together is exhilarating. And finding a new definition for family just might be worth the risk to every bond that exists between them.

On Friday night, Anya makes a veritable vat of her low-calorie beef bourguignon so there will be plenty of leftovers, and the kitchen smells rich and warm by the time the doorbell rings.

Zac is slumped at the breakfast bar fiddling on his phone, but he jumps up at the sound, bouncing like his legs have turned to pogo sticks, as if he didn’t see Cal a few hours ago. They recorded a rough cut of the first song from the new album this week, and it seems like every other word out of his mouth is about work. It’s all Cal this and Cal that, and Can Cal come over for dinner? I have a few things I want to go over with him and this way he won’t be miserable that he has to talk on the phone like a normal person.

She agreed, mostly to make Zac happy, but also a little because she’s curious to observe Cal for a bit, now that she knows he has hidden depths.

Zac kisses Anya on the cheek, telling her, “You smell good,” before turning to go answer the door.

“He used to use his key before I came along, didn’t he?” she asks, before he can leave.

“More of the patented Cal Keller respect program, I suppose.”

Zac drums his fingers on his belly for a second. “The stew smells delicious.”

He grins at her as he leaves, and a moment later, she can hear them talking in the entryway about something that happened at the studio earlier, their voices deep and soft, and Zac laughs at whatever Cal says.

She opens a bottle of wine and makes a pitcher of ice water with lemon. She hesitates, wondering if she should offer something else to drink. She’s not sure what Cal will prefer. He’s come over for dinner dozens of times, and he’s expressed so few opinions that she’s still not sure of his preferences. She only knew about his dislike for green peppers because Zac mentioned it.

That might be the most Cal thing about Cal—that she’s been the wife of the most important person in his life for almost three years now, and no matter the overtures she makes (and there have been more than a few over that span of time) they remain merely acquaintances.

It occurs to her that maybe he simply doesn’t like her.

It’s possible. She’s strong-willed and direct. She’s gotten a lot of flak about that over the years, starting in her modeling days, and continuing into the present; there’s nothing that society hates worse than a woman who dismisses the importance of others’ approval. She curses, she drinks and she smokes pot (not lately, of course, because she was carrying and then breastfeeding PJ, although if there’s ever been a daily activity that called for chemical relaxation on a regular basis, it’s motherhood). She speaks her mind and argues, she gets angry when she wants to, she’s fucked a lot of men, and on a couple of occasions, she didn’t even know their names. She’s fine with these things, but more than a few people have turned their noses up at her over the years.

Never mind that she doesn’t do a damn thing that her husband doesn’t do, and there have been whole magazine spreads about how great he is, praising his raw, masculine strength and his creative “passions.” She rolls her eyes at the thought. She doesn’t expect people to let her get away with bad behavior, but there’s a difference between bad behavior and unladylike behavior, and while she doesn’t mind being called out for the first, anyone who has a problem with the second can choke on it.

She can see how someone like Cal, someone with a wholesome, old-fashioned way of viewing the world, would find her lacking.

But at the same time, it doesn’t really fit. He’s never been anything but perfectly gracious with her. From the first time they met, not a single one of his smiles has ever struck her as forced, and he doesn’t avoid her, doesn’t look for opportunities to see Zac in her absence. He’s told her more than once that he can see how much happier Zac is now that she’s in his life, that he’s glad that Zac has her, and he legitimately seems to mean it.

No. She knows she can be divisive, but whatever this thing with Cal is, this barrier between them, it isn’t that he disapproves of her. 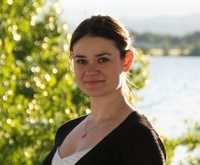 Sidney Bell lives in Colorado with her amazingly supportive husband. She received her MFA degree in Creative Writing in 2010, considered aiming for the Great American Novel, and then promptly started writing fanfiction instead. More realistic grown-ups eventually convinced her to try writing something more fiscally responsible, though, which is how we ended up here. When she’s not writing, she’s playing violent video games, yelling at the television during hockey games, or supporting her local library by turning books in late.
Find out more on her website.
Promotional post. Materials provided by the publisher.