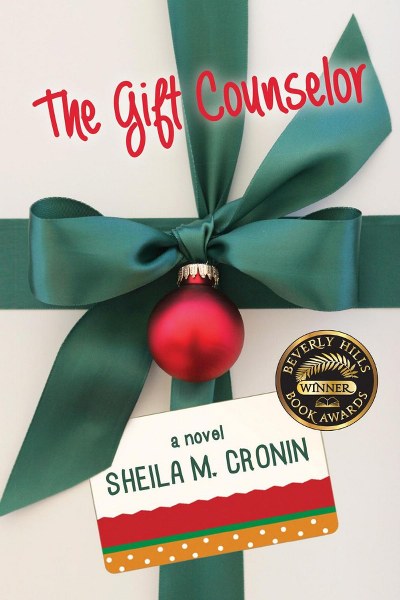 Do all gifts have strings attached?
Yes, believes Jonquil Bloom and she intends to prove it. She's a psychologist who uses her skills in a department store to help shoppers of all ages become good gift givers. Yet, her ten-year-old son wants a dog she won’t let him have.
Enter the handsome bachelor who is ready to settle down.
A timeless mix of romance, family drama, psychological and inspirational breakthroughs, all served with humor, this story will warm your heart year round. Winner of Beverly Hills Book Award, shortlisted for the UK Wishing Shelf Book Award.
The Gift Counselor is suitable for young adults. Book club recommended.

JONQUIL HAD JUST sat down to her desk at Children’s Home when she heard a faint tap on her door. Two things occurred to her at once: the Coles kid was standing outside her door and he was being discharged that morning.

“It’s open!” she called out brightly.

The Coles kid negotiated the entire visit in under nine seconds, barely making eye contact and stuttering in that adolescent twang of his. “M-Ms. Bloom, th-thanks f-for helping m-me. I m-m-made this f-for you.”

He dropped something into her lap. Then, before she could react, he bolted out the door, the squishy sounds of his sneakers echoing down the linoleum corridor.

Left to make the discovery in private, she held the object up to the light. It was one of his woodcarvings made in art therapy, she surmised. Roughly four inches long, it appeared to be a crude rendering of a reclining Irish Setter. Pet dog? She couldn’t recall him ever mentioning one, so she examined the piece more closely as her analytical skills kicked into gear. Why a setter? Why the literal pose? Could this be a good omen, another sign of his passivity or—

“Oh, God.” The carving slipped from her fingers. Her eyes darted up to the bulletin board on the wall above her desk.

There, beneath layers of memos and schedules, hung a faded snapshot of her husband, Gerry, and at his feet, all doggy adoration, Baron, taken days before a house fire had killed them both. She’d tacked up the photo when her internship began, but then had covered it over, so conflicted were her feelings. Uncanny, how the Coles kid had selected the most hidden, painful image in her office to serve as his model.

Was it still there? Jonquil jumped up and furiously ripped down the papers. The photo was gone. The Coles kid must have removed it in order to make the gift and surprise her.

She turned pale. What if her son Billy, on one of his rare visits to her office, had ever seen that photo?

She sank back down in her chair, her heart pounding as though she, not Stanley Coles, had just sprinted down the hall.

Moments passed. Gradually, her pulse slowed. Fingers shaking, she again picked up the carving. The Coles kid had even stained the wood to make it more life-like. Baron! A gush of dark memories, like smoke, engulfed her. She was afraid she might pass out. Just then the hall buzzer sounded, shattering the moment.

Jonquil jammed the carving into the pocket of her corduroy jumper, stood up, and after giving her face a quick scan and lipstick touch up, she locked her office and nipped over to the nurses’ station.

Up and down the long corridor, Thanksgiving decorations drooped from the walls, while doors swung open on both sides, lending some light to the dingy hallway. Children’s Home, where UCLA’s graduate school of psychology had placed her, was a residential treatment facility and school for emotionally disturbed, and in rare cases, abandoned minors. Rumor had it some movie mogul in the thirties had hidden his pregnant girlfriend here. Whether true or false, the rambling edifice now housed a hodgepodge of children whom Jonquil knew well.

The children, ages four through sixteen, appeared normal during routine moments such as changing classes. Even so, there were those who would not let Jonquil pass without needing a hug, while others seemed to stare through her, more aware of their “voices” than the commotion in their direct path.

Jonquil knew that her frizzy auburn hair and freckles often sparked snickers among the older residents but she took their reactions in stride. What she would never get used to was the sight of a schizophrenic boy her son’s age, hallucinating on his way to his next class.

When she entered the nurses’ station, her two favorite staff members were busy charting: Nurse Betsy, a bleached-blonde, nurturing type, indispensable in this setting, and Phil, a nursing student from Manila and a natural at dealing with the adolescents.

They both looked up and greeted her as she poured herself a cup of coffee. Then Betsy asked, “How was your Thanksgiving weekend, Jonquil?”

“Long.” Jonquil was glad that the weekend had ended and another full work week lay ahead. “How was yours?” She leaned against the counter and let the coffee soothe her.

“I was here ’cause I usually work on holidays. It’s quieter since most of the patients have weekend passes. I like to take my vacation when all hell is breaking loose around here,” Betsy replied with a giggle.

Jonquil chuckled. “Smart. Good thing the weather changed this morning or else Billy and I might still be down at the beach.”

“You don’t sunburn with that Irish skin?” asked Betsy.

“I’m really lucky because I love having a tan. It makes my eyes greener and makes me feel younger. Maybe my mother’s Swedish genes made the difference.”

Betsy asked if Jonquil had seen the Coles kid before he left that morning. Nodding her head, she withdrew the carving and watched their reactions. After initial oohs and aahs, Betsy commented, “But that boy couldn’t so much as share a lunch table when he came here. Now look at him, doling out hand-made gifts. Jonquil, you’re a wonder with these kids.”

She waved off the compliment like a jinx, tossed her cup in the wastebasket and turned to go.

Phil snapped his fingers rapidly to claim her attention. “It’s a gift, right? Will you use it as an example in your research project?”

Jonquil glanced at him, startled. “Maybe.” 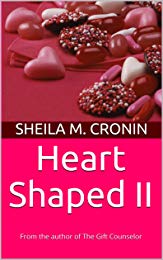