Blogtour: Askew Ever After anthology

Askew Ever After
A Limited Edition Contemporary Romance Collection

One kiss changes everything... 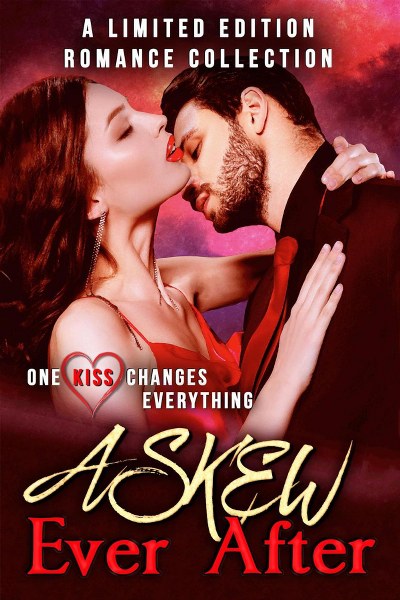 The characters inside these pages will leave you wanting more after they set your e-reader on fire. Askew Ever After has a romance for everyone.
Forbidden loves find ways to be together against all odds. Fated romances find each other at last, then the real journey begins. Billionaire bosses fall in love with their sassy executive assistants and bend all the rules so they can be together. Small town cowboys rope their sweethearts in with their southern drawl and a little down home love. Alpha males prove their worth while defending their loves, and of course bad boys can’t help but bring the drama. Rockstars who know exactly what they want and won’t stop until they get it. Tattoo artists with an enchanting softer side. There will be secret loves, second chance romances, and everything in-between.
If you want love, Askew Ever After has a happy ever after made just for you.

From Turn the Page by Rebecca Lovell

“So this script you’re going to read, it’s for next week’s episode?”

“No, we’re just going through some of the scripts to see how they sound. We won’t start shooting for next season until summer.” Marc glanced at his watch and she wasn’t surprised to see that he still wore one. In Portland hardly anyone wore a watch but out here everyone wanted to make a fashion statement with theirs.

“The heat’s going to be terrible,” Chelsea said. “Even in Portland it can get unpleasant in August, I can’t imagine what it’s going to be like here.”

“It’s not great,” Marc agreed. “People like it, though. The way it looks, I mean. When people in Detroit imagine California, they think sunshine and palm trees. No one wants to watch an LA crime drama where it’s cold and rainy.”

“I never thought of it like that.” Chelsea considered her ice cream. “The studio is going back and forth on where they want to shoot the movie. They said I don’t need to be on site for everything, I can

just fly out and back.”

“You could have done that from Portland,” Marc said. “Why’d you move down here?”

“I wanted to see the West Coast,” she said, sudden fear threatening to close her throat. “Palm trees and sunshine.”

“You’ve come to the right place, then.” Marc glanced at his watch. “The line took longer than I thought. I’m going to have to head out. Okay with you if we walk and eat the rest?”

“Sure,” Chelsea said, hoping he wasn’t going to try and walk her to her car again. She wasn’t sure what kind of excuse she could use this time and she didn’t want him to think she was blowing him off. “Where did you park?”

“Down about two blocks. You?”

“Two streets over that way,” she said, pointing in the opposite direction. It was a relief to know she didn’t have to come up with an excuse this time. “Sorry I took so long to get here, we could have spent a little more time talking.”

“Sorry I took so long to call you. I should have done it yesterday. I like hanging out with you,” Marc said. “Even if it’s squeezing in a snack on my way to a reading.” Then, before she could come up with something clever to say, he leaned down and gave her a quick kiss. Chelsea stopped in her tracks and he looked at her curiously. “Should I not have done that?”

“No,” she said quickly. “You definitely should have done that.”

“You can do it all you want.” It didn’t seem possible but Marc’s grin got even wider and he put the hand not holding the last of his ice cream on her waist to draw her closer.

The warmth of his body pulled her like a magnet and she resisted the urge to press every inch of herself against him. It had been a long time since she let anyone kiss her and she had missed it. His mouth that was still slightly cold from the ice cream warmed as his kiss became deeper and Chelsea’s lips parted to let his tongue brush past.

She tasted blueberries as their breath mingled and her heart beat faster. When they parted, his face was completely serious for the first time since she’d watched Crosswind and she hoped she hadn’t done anything wrong.