Blogtour: Tears of the Wolf by Sharon Buchbinder 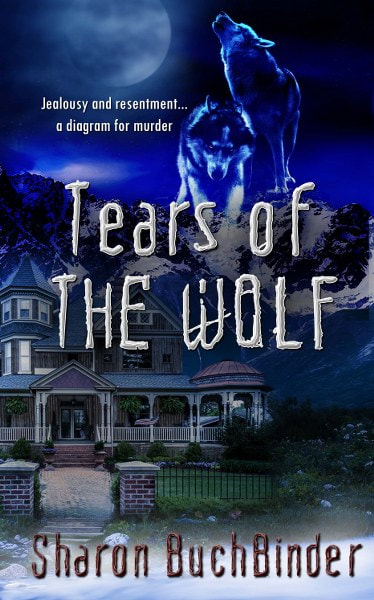 Chief of Tribal Police Jacob Graywolf serves and protects his community on the reservation. When an epidemic of missing and murdered Indigenous women hits home, he's relieved the FBI gets involved. But something about the woman agent has him running scared.
FBI Special Agent Zena Adalwolf is certain Jacob is her soul mate. Their connection at first sight is immediate and urgent—a bond that transcends their professional relationship. If only the clueless hunk would realize they belong together!
After more Native American women are killed, Zena and Jacob suspect they have a serial killer on their hands. To track down the unsub, they allow their inner wolves to come out and play. But with the ever-ticking clock going wild, will the killer find them first?

Jacob Graywolf walked in the door at six on Friday evening. Jessie, the gray-chinned black Labrador mix, greeted him with a slow wave of her tail and slumped down at his feet. “How you doing, old girl?” He rubbed her head, and she gave him a doggy grin. “Biscuit?”

Her head jerked up, and her tail thumped. “Here you go.” He dug a treat out of the jar. “The way you like it.”

Setting a bouquet of flowers on the table, he placed his black-padded jacket on the hook and looped  his Sam Browne over the next one. The belt with his holstered side-arm hadn’t bothered him all day. The moment he arrived home, however, it seemed as if the tools of his career—even the light-weight Kevlar vest— weighed a hundred pounds.

The tantalizing aroma of roasting turkey filled the kitchen, and his stomach growled in anticipation of a feast.

Rummaging under the sink to find a suitable vase, Jacob’s hand fell on the one he’d made for his mother in middle school using the class pottery wheel. Streaks of blue and red drizzled down the sides, cooked into perpetual tears by the kiln. Perfect. After he trimmed the ends of the stems and removed the greenery that would slide beneath the surface and hasten the decaying process, a thorn pricked his index finger and a rivulet of crimson sluiced into the water. With his dry hand, he pulled out a tissue and pressed it to the weeping wound. He placed the red roses in the center of the table set with three place settings, a braided loaf of challah, and two unlit white tapers. A whisper of a sound, and his mother entered the kitchen—wrapped in a colorful, geometric-patterned dress, her long, dark hair still damp.

“Jacob! You’re early. And you brought my favorite flowers.” She pecked him on the cheek, and the scent of eucalyptus washed over him reminding him of his asthma treatments as a child. “You must’ve gone all the way into Billings for them. Thank you.”

“No, Mom. I’m on time. And you’re welcome.” She smiled and waved a hand as if swatting a fly.

“That’s early in this house.”

“Only for you.” He glanced at his watch. “How long before dinner is ready? Do I have time to grab a quick shower?”

“Yes. I even left you some hot water.”

As he headed toward his wing of the house, she called after him. “I can’t wait to tell you about this new doctor at the clinic. What a jerk.”

“Now, Mom, you were a tenderfoot once, too.” He chuckled. Every July, the same complaint was issued when a fresh batch of doctors and nurses arrived at the Crow Indian Health Service to repay their student  loans. His mother, a nurse midwife, had been on the reservation for over three decades, and she could spot the good, bad, and ugly ones the day they hit the door. Her predictions were eerily on target. “This one’s a keeper. That one will only last three months and ask to be transferred. That one is dangerous. I’ll have to watch him like a hawk.”

Nine times out of ten, she was right. The one time she’d been wrong had been a doozy. She’d planned to stay at the clinic for three years—but never left.

Twenty minutes later, scrubbed clean of road dust, traffic stops, and disorderly conduct calls, Jacob began carving the turkey for their Sabbath dinner while his mother arranged all of the side dishes on the table.

“Is that huckleberry sauce, I hope?” His mouth watered. Sweeter than cranberries, and tarter than blueberries, the hard-to-gather fruit was one of his favorites.

“Why, yes, it is. I had to fight off three black bears to get enough.” She put her hand on her chest before continuing, “But for you and your father, no effort is too hard.”

“Miriam Oldhand had a good harvest?”

She laughed. “Yes. She did.” She picked up her story from earlier. “I’m telling you. What a day at the clinic. Endless. And that new doctor?”

He sipped his water and nodded, knowing not to interrupt his mother in her narrator mode. “Something’s not right about that boy. Even the mice avoid him.”

“Mom!” Jacob laughed. “You’re not supposed to say things like that.”

She harrumphed. “I don’t like his great-white- savior attitude, as if we haven’t been able to get along without him for all these years.”

“Cut him some slack, Mom. You were new once, too, and out of your element. Lay some of your wisdom on him, show him the way.”

Her expression softened. “You’re like your father, always giving people the benefit of the doubt.”

A wave of sadness crested and crashed within him. It had been over twenty years since his death, and still she spoke of his father in the present tense. A testament to the enduring power of love? An inability to move on with her life? Or was it, as she said, that Joseph Graywolf had never truly left them.

“Dad was Chief of the Crow Tribe, a politician. People loved him. I’m a cop. People hate to see me coming.”

“You’re both leaders. And people love you. I know because they tell me so at the clinic, all the time.”

He placed slices of the bird on the waiting serving platter, cut the sweet potatoes in half, and slathered them with cinnamon butter and brown sugar. Sweet potato pies, minus the crust, the way his father liked them. Maybe they were more alike than he recalled.

She nodded, and then lit the traditional Jewish Sabbath candles and chanted the Hebrew blessing. “Baruch atah Adonai Eloheinu, Melech haolam, asher kid'shanu b'mitzvotav, v'tzivanu l'hadlik ner shel Shabbat. Blessed are you, Adonai our God, Sovereign of all, who hallows us with this mitzvot, commanding us to kindle the light of Sabbath.”

The door flew open, the candles blew out, and his mother’s face paled. “Joseph,” she breathed.

Chuffing softly, Jessie lumbered to her feet, her tail wagging in greeting.

Jacob strained his eyes, to no avail. Unable to see spirits, he had to rely on his mother—and the dog—to alert him to their presence. “What is he saying?”

She shook her head, her gaze never leaving the open doorway. “He’s not speaking—his face—it’s covered in blood.” She turned to her son. “You need to get back to work. Someone’s been murdered.”

Sharon Buchbinder has been writing fiction since middle school and has the rejection slips to prove it. An RN, she provided health care delivery, became a researcher, association executive, and obtained a PhD in Public Health. She is the author of the Hotel LaBelle Series, the Jinni Hunter Series, and the Obsession Series. When not attempting to make students and colleagues laugh or writing, she can be found fishing, walking her dogs, herding cats, or breaking bread and laughing with family and friends in Baltimore, MD and Punta Gorda, FL.
Website * Blog * Facebook * ReadersGroup * Twitter * Instagram
Bookbub * Amazon * Goodreads * Newsletter