It is a standalone book.

In this newest story collection from award-winning writer, Daniel M. Jaffe, red-blooded American men make mischief while vacationing abroad. They encounter a serial killer in a Munich bathhouse, a gay Holocaust ghost in Prague, a shape-shifting seductress in Mexico City, a desperate prostitute in Seville, a closeted Catholic school administrator in Dublin, and many others. These stories will transport, titillate, intrigue, and tug at your heartstrings. 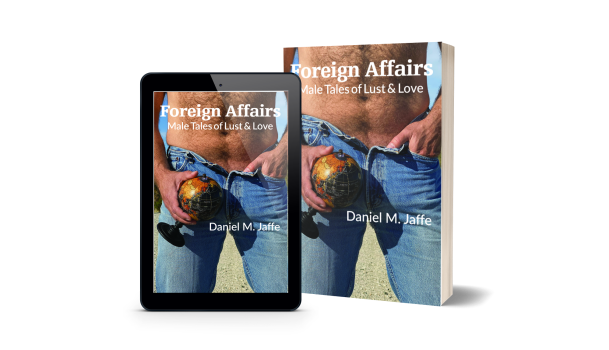 Excerpt
Bill understood Quinn to be whispering “dirty,” but in the raspy, heavy brogue, the word came out as “dehrty”: “Yer a dehrr-ty, dehrr-ty man.” Quinn flicked out his tongue and sucked it in, frog-like. With a thurping sound: “You’re a dehrr-ty, dehrr-ty man,” thurp thurp thurp.
A journalist for the Chicago Tribune, Bill had arrived in Dublin this morning to write a human interest story on the upcoming gay marriage referendum. Polls anticipated Ireland becoming the first country to authorize gay marriage by public vote. Traditional, Catholic Ireland.
Not having slept on the plane—and his body reminding that he was older than he used to be—he spent the day napping in his Jury’s Inn Christchurch hotel room, studying local newspapers and webzines, making notes and listing questions for his article. He supped in his room on take-away from the “great wee chipshop” around the corner, Leo Burdock Fish & Chips—greasy, salty, thick-crusted smoked cod accompanied by more fries than he could possibly consume. Later on, he trimmed his gray beard, donned jeans and a button-down blue shirt that showed off his squarish pecs without appearing too obvious—his decades-old uniform whenever scoping out a new city’s gay life. Bill always enjoyed these forays most of all, surveying the terrain before his newspaper’s photographer arrived and hovered, thereby preventing Bill from conducting his most enjoyable background research.
Passionate encounters with locals were the secret to Bill’s success as human interest story writer—even in his late 50’s, he could still get laid with fair enough regularity, especially as exotic foreigner. Few journalists’ articles contained the under-the-skin insights Bill’s did, revelations feeling like disclosure to a trusted confidant. Bill’s interviews read like intimate pillow talk because that’s precisely what they were.
Bill put little stock in ethical baloney about maintaining journalistic distance: if you want to get an inside story, you need to get inside. Repressed countries were Bill’s specialty because they burst with scared horny locals who had few other bed partner options. Want a journalist to cover police harassment of Russian gay activists? brutality against gays in Iraq? death-threats against gays in Uganda? Send Bill with a pack of condoms to ferret out the under-cover(s) scoop. Only a matter of time before he’d win a Pulitzer. He sure was having fun trying.
Bill headed out in the cool evening for George, the nightclub touted on all Irish gay websites as Dublin’s primary gay hangout. He’d undoubtedly find some trick to “interview.”
Strolling down Dame Street—odd, he thought, how historically grand the word “Dame” sounded in Ireland, whereas in American ears it came across as outdated Al Capone cheap. He walked the narrow sidewalk past restaurants, pubs, cafés, repeatedly bumping shoulders with those walking toward him until he realized that the Irish walked the way they drove—on the left, unlike on-the-right Americans: head-on collisions were inevitable.
A scan around the cobblestone courtyard of Dublin Castle, a mix of red brick Georgian palace, gray medieval fortress, and white-gray Gothic revival chapel. A quick look-see at City Hall with its white-gray granite columns and triangular pediment. On the corner of South Great George’s Street, a main shopping avenue, he faced an enormous mural covering the entire side of a gray building: two young men, one in white sweater, the other in black, snuggling in romantic embrace. Larger-than-life gay love, four stories high. And tacked to a lamppost on the corner beneath it—a bold, green-lettered “Yes For Marriage Equality” poster sporting a rainbow flag. All this smack in the center of Catholic Dublin. A more in-your-face public display than he could recall having seen in Chicago’s Boystown.
That must be the place, with the rainbow flag over the entrance and a thick bouncer staring into Bill’s eye. He nodded at the guy and stepped inside. A low-lit cavernous space with stairs to the right—the upper level looked closed…well, it was a Sunday. The music was fast-paced and louder than he liked. Bill walked to the far end of the long bar with men and women in their 20’s chatting, noted the stage behind the bar, empty now of the drag acts he’d read about. He grabbed a black leather barstool, asked the muscular barman for a pint of Guinness, one of those touristy must-do’s. He savored the thick molasses foam, the mix of bitter and heavy sweet, then turned to the lean young man beside him, a handsome fellow with close-cropped blond hair, and introduced himself, knowing that his accent would lead at least to a where-are-you-from conversation. Bill slapped on his personae of naïve visitor: “All I basically know about Ireland is leprechauns and four-leaf clovers.”
“And all I know about America is that you all carry guns and shoot black teenagers when you’re strung out on crack.”
About the Author

Daniel M. Jaffe is an award-winning writer whose short stories and personal essays have appeared in over half a dozen countries and several languages. He has been profiled in The Greenwood Encyclopedia of Multiethnic American Literature, and his work has been taught in college and university courses. Daniel is author of the novels Yeled Tov, The Genealogy of Understanding, The Limits of Pleasure, and the short story collection, Jewish Gentle and Other Stories of Gay-Jewish Living. He lives in California with his husband, the writer and professor, Leo Cabranes-Grant.

Follow the tour and check out the other blog posts, interviews, and reviews here