A stuntman with a love for fire.
A yoga teacher in search of zen.
A holiday season neither will forget. 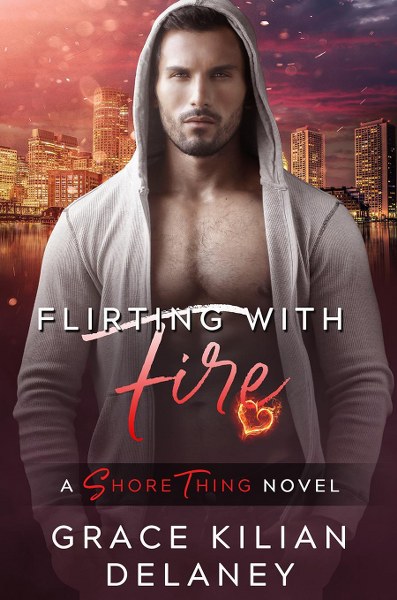 Stunt performer and self-declared badass, Tate Astbury returns to his hometown to spend another dreaded Thanksgiving with his dad. But his father forgets and makes other plans, resigning Tate to a quiet and depressing holiday alone unless he can find someplace else to celebrate.
When Tate’s mischievous friend learns about the unfortunate twist, he dares Tate to enter a radio contest to become a fake boyfriend for a desperate caller’s holiday dinner, and Tate never turns down a dare.
Endre Michel is a mess. His yoga business is on the cusp of ruin, and his moms are visiting from out of state for the holiday, intent on meeting his boyfriend, a person Endre invented. Through the contest, he meets Tate, a crude, tattooed older man who plays the role of doting boyfriend so well, Endre suspects and hopes it’s not all for show.
Neither man can deny the unintended connection, and they struggle to overcome the distance between Tate’s put-together Hollywood career and the chaos surrounding Endre’s unsteady future—a situation that intensifies when an unthinkable tragedy uncovers a dark and painful truth.
Will Tate and Endre’s future together perish in flames, or can their love rise from the ashes?

Flirting with Fire is a standalone holiday romance with several cups of angst, questionable jokes, a bird with a wicked sense of humor, a bed with loud, squeaky springs, and an HFN/HEA ending.
CW: suicide, substance abuse disorder, grief, mental illness
**All books can be read as a stand alone**
Goodreads * Amazon
EXCERPT

Brown leaves crunched as Tate Astbury walked to the granite headstone symbolizing the division of his life into two parts: Before and After. Winter lingered in the air; that clean, cold scent seeped into his bones, bringing back childhood days in New England with family celebrations and weeks that carelessly slipped by into spring then summer.

That was Before. Before the guilt festered. Before he saw two people in the mirror instead of one. Before he took the one person who meant everything to him for granted.

Tate approached the headstone with the name he learned to spell at the same time as his own, the date of birth he shared, and the date of death he didn’t. He plucked off the dried leaves and twigs that had fallen on the plaque and put a single white rose down.

“Never thought I’d make it past thirty, yet here I am, thirty-three years old. All the dumb shit I’ve done since you…since I last saw you, you would think I’d be the one interred.” He should’ve been. They had done everything together. Death shouldn’t have been any different.

Tate squinted, staring across the field of headstones to where a couple stood holding hands in front of a grave.

“It’s gotten easier. Like, some days, I don’t think about you or what happened right away.” Until he looked in the mirror. Then he saw the irreplaceable soul whose face he would never forget, a blessing and a curse. “You’d tell me to quit being so dramatic and get on with my life. But today it’s hard, so cut me some slack, aight?”

A cardinal perched in the tree above him and whistled, its song like someone calling for its dog. And then it shit, missing Tate’s head but landing on his shoe with a splat.

“Fucker.” Tate laughed, figuring he must look like a crazy person out there laughing alone. Well, not entirely alone. There was that bird with a wicked sense of humor.

“I get it. Enough with the pity party. I’m going to celebrate with the boys later. But this one’s for you.” He unscrewed the miniature Jack Daniel’s bottle, not his favorite but his twin brother liked the brand, and poured the entire contents on the grave.

Dancing With A Star
A Shore Thing Series Book 2

You had my heart as a boy, and whether you realized it or not,
you’ve kept it all these years. 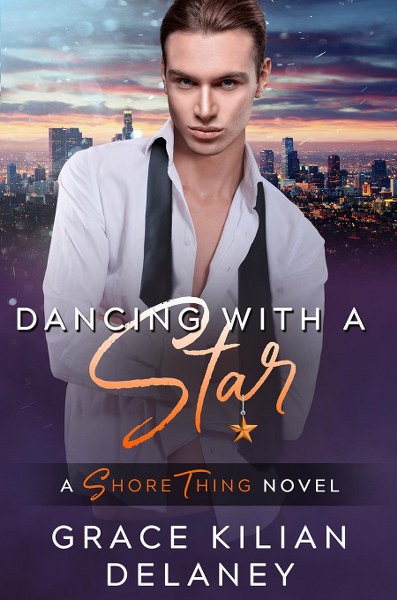 Androgynous fashion model Quinn Bouchard knew this day was coming. Hours before one of the most important photo shoots of his career, his wife asks for a divorce—a divorce they had agreed upon before exchanging vows—causing upheaval in his otherwise happy queerplatonic relationship. As if the day wasn’t hard enough, Quinn learns Xander Engstrom, his childhood best friend now a movie star, is part of the photo shoot, and their reunion awakens something Quinn hasn’t felt in years, leaving him sure of only one thing: he needs Xander back in his life.
Movie star Xander Engstrom has regrets, and the epic fight spread across the tabloids between him and his ex-boyfriend—an addict that won’t leave him alone—is the biggest. To control the damage, Xander agrees to an interview and photo shoot with a well-respected publication where he meets Quinn, the first boy he had a crush on. Xander’s pathetic, romantic heart falls all over again for his long-lost friend. The only problem is the type of relationship he’s thinking of isn’t possible with the stunning model.
Living on opposite coasts and worlds apart, they navigate through months of coordinating schedules, the whims of a finicky film company, and nights in hotel rooms to spend time with each other until secrets force them to choose between a future together or letting their pasts tear them apart.

This friends-to-lovers, slow-burn romance contains implied sexual abuse, one photogenic gargoyle, and discussions about cannibalism.
Can be read as a stand-alone book as Quinn’s story starts before Julien’s in Living on a Dare (Book One) and ends a year later.
**All books can be read as a stand alone**
Goodreads * Amazon
Living On a Dare
A Shore Thing Series Book 1 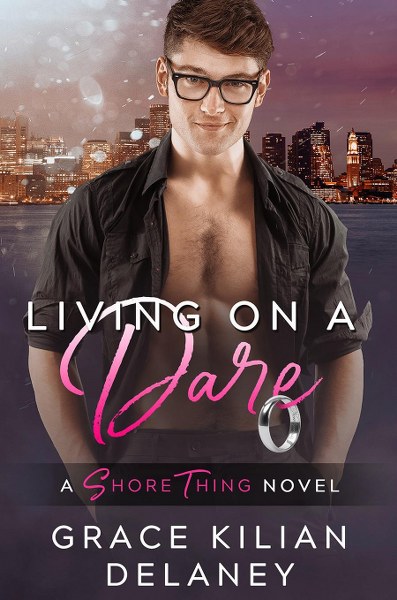 Stuntman Draven O’Connor never turns down a dare—even if it means getting down on one knee to propose to his former college roommate and friend. The same man he’s been crushing on since the first day they met. The same man that has grown distant over the past year. And the same man who just agreed to be his fiancé.
Julien Bouchard is tired of living a lie. He spent the past year exploring his sexuality in secret, enduring countless dates with women to appease his mother, and dodging his best friend, Draven, who knows everything there is to know about him, except the one thing that could change their friendship. Ready to face his friend, he meets him at a bar and is greeted by an unexpected marriage proposal. The dare isn’t surprising; it’s the scorching hot kiss that sends Julien’s head and heart in a tailspin—and gives him an idea for the perfect plan.
But his plan hits a bump when news of their fake engagement spreads to their families as fast as a wildfire, forcing them to confront their true feelings about each other and hope they don’t get burned.

**All books can be read as a stand alone**
Goodreads * Amazon

Author, musician, and human slave to the dog and cat that rule her house, Grace Kilian Delaney enjoys giving her characters a dark sense of humor and a happily ever after.
Website * Facebook * FB Group * Twitter * Instagram * Bookbub * Amazon * Goodreads

Email ThisBlogThis!Share to TwitterShare to FacebookShare to Pinterest
Labels: blogtour, excerpt, giveaway, promo, series - can be read as a standalone