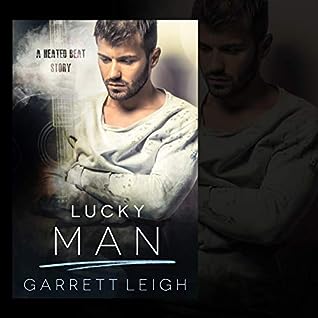 As a diehard music fan, a dirty, smoky gig is Vice Squad Detective Danny Jones’s idea of heaven. While watching one of the most popular bands in Northern England, the sight of gorgeous rock star Finn McGovern changes his life forever.

Beneath the tattoos and leather jacket, Finn is kind and sweet, but when he confesses a dark secret to Danny, it tests their fledgling bond. Danny digs deep to accept Finn, but before long, a terrifying trail of death threatens to tear them apart before they’ve even got started.

A monster is killing prostitutes on Danny’s patch, and when a dead girl turns up too close to home, Danny discovers a heartbreaking link between the girl and his bright new life with Finn, a life he’ll do anything to protect.

If you saw my review for 'My Mate Jack, then you can't tell me you didn't see this one coming...

'Lucky Man' brings us back to the world of 'My Mate Jack' only this time Will and Jack are secondary characters as we get to know Jack's roommate...Finn McGovern and the man who ultimately wins his heart...Detective Danny Jones.

Finn's the lead singer for one of northern England's most popular bands. Danny's a cop whose idea of relaxing is involves smokey, grungy venues, filled with people all there for one reasons...music. When Danny first spots Finn, he can't look away but what he doesn't realize is that Finn's having the same problem.

While I really liked Danny and enjoyed the part of the story that revolved around him as a cop working on what could be the biggest case of his career. It was Finn who well and truly captured my attention and my heart.

Finn's a talented musician and a man dealing with maintaining a balance in his life that allows him to maintain the precarious hold that he has on his mental health. Mental health issues are often times either trivialized or sometimes it even seems like they're glamorized but with Finn we're given a real person...someone who could be living next door. He's not made to seem heroic for his efforts to have the life he wants nor does he feel like he's a failure when he has a setback. Just as someone would deal with a physical disability or a chronic illness, Finn is presented as a person dealing with a health issue and his happens to be a mental health issue.

This is an issue that the story treats with dignity and respect and while the story is fiction the reality of Finn and his condition are fact for many, many people in the real world and whether the story is a real one or fiction such as the case is here, this is a condition that needs to brought into the light.

As well as how Finn and his condition were presented I was impressed with the realism of Danny's response to Finn, when he was told about things by Finn. Sure he took a tiny step back but he didn't walk away and I know we can all say 'well he shouldn't have done that, he should have been ok with it.' but reality is how many of us wouldn't have needed to take a tiny step back to process this information because and I know it can hurt but for me, if I was in Finn's shoes I'd rather have that person walk away at the start than to let me love them even more and come to depend on them as a constant in my life and then when I truly needed them to have them walk away...that would be more painful than I could possibly imagine.

From Danny's side of things Finn also had some processing and decision making to do because being a police officer and being out and proud wasn't necessarily something that Danny felt prepared or ready to do and Finn needed to decide if this was something he could accept.

These two men worked hard to find their happy and in the end it was a much deserved happy that they won for themselves.

As was the case in 'My Mate Jack' all of this was wonderfully given voice and substance by the very talented Dan Calley and if there was any doubt in my mind before that Garrett Leigh + Dan Calley = an audiobook that I must have, there's none there now.

An audio book was graciously provided by the author/publisher in exchange for an honest review.