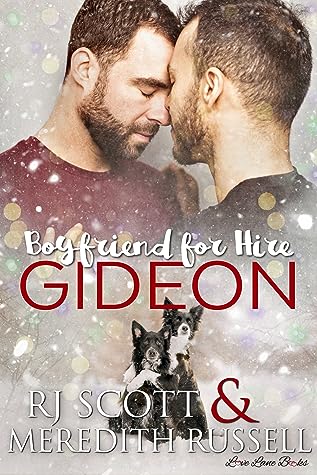 A snowy cabin with one bed? That’s only the first step toward Gideon falling in love.﻿Gideon is too old to be fought over at Christmas by divorced parents who should know better. The prospect of a Christmas on his own is better than having to face either of them. When Rowan hires him for a wintery break in Maine, it seems like a safe choice until his PA’s meddling family shows him something entirely new: Love.Rowan hiring his boss for a trip back to his moms’ place for Christmas sounded like a good idea at the time. Killing two birds with one stone, he can cheer up Gideon and possibly steal a kiss under the mistletoe. After all, he’s been hiding his attraction to the man for years, and maybe with some Christmas magic, he can help Gideon see what is right under his nose.

I’ve been curious about Gideon since the first book in this series…which really only makes sense since he’s the boss at Bryant & Waites, along with Rowan, his PA.  While we’ve seen glimpses of both these men in the previous stories, this one throws them both into the spotlight, and we not only get to see their romance in the making, we find out a whole lot more about each of them as the story progresses.

Gideon’s spent the past 7 years keeping his attraction to Rowan under wraps and strictly professional so a few more days at Christmas shouldn’t be a problem, right? Even if they do have to share a bed. After all they’re mature adults, they can do this, right?

Watching Gideon and Rowan navigate their way through a family Christmas with Rowan’s family was, to say the least, heartwarming and entertaining. For as much as Gideon wants Rowan, what he doesn’t want is to lose the man who keeps his business running smoothly or the chance to see him on a daily basis. While Rowan wants Gideon just as much, but the thought of not having the job he’s come to love or see the man he adores every day is every bit as terrifying for Rowan…both men have decide if the reward is going to be worth the risk if they decide to cross the line between friends to lovers.

I loved the fact that while neither man was sure if they wanted to risk becoming more, being friends was never really an issue as far as they were concerned. This one was not just a case of friends to lovers; it was also a slow burn, and I do mean slow…after all it took them seven years to get to that first kiss. Mind you, it was all worth waiting for. These men were hot both in and out of the bedroom, and they both gave as good as they got in the banter department.

Coming from a large family myself, I found that in some ways I was able to more easily relate to Rowan than Gideon, and I totally get how for as much as Gideon felt like he knew Rowan, seeing him interact with his family at times left Gideon feeling like there was a whole other Rowan that he’d never seen.

Gideon was a story that truly worked for me, more so than the previous books, which is not to say that I didn’t like them…hello? They were both 4 stars for me. But, this was also a case of I’ve been looking forward to this one, and happily I can say it did not disappoint, and needless to say I’m looking forward to Jared, book #4.

An ARC of ‘Gideon’ was graciously provided by the authors in exchange for an honest review.