Release Blitz: Cat’s Got Your Heart by Jem Zero

Title: Cat’s Got Your Heart 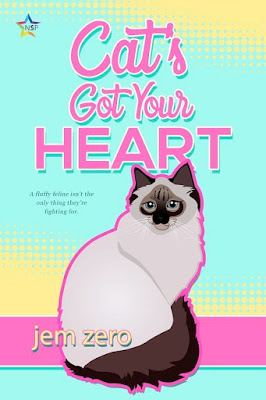 Adopting a cat doesn’t sound hard. Then Jericho Adams meets Harinder Mangal, the surly pet store employee who loves animals and hates customers. Their first encounter inspires more than simple loathing—it puts the ball in motion for an absurd game of deceit that boasts a fluffy cat named Dumpling as the prize.

Harinder hates Jericho’s attitude, especially when it comes to owning a pet. He attempts to chase the other man from his store and is shocked when Jericho overcomes every obstacle, no matter how bizarre. Not only that, but he generates some of his own wild inconveniences that leave Harinder seething in his ugly sweater and mom jeans.

Before either man can get the other to crack, Harinder finds himself unexpectedly homeless. Despite their mutual antagonism, Jericho invites Harinder to crash at his place. The increased proximity makes it difficult for Harinder and Jericho to maintain their respective ruses, not to mention stopping themselves from actually caring about their pet-parenting rival.

Cat’s Got Your Heart
Jem Zero © 2020
All Rights Reserved

Jericho Is Not Prepared

There’s a Petco another half hour down the bus line, but it’s snowing and Jericho doesn’t have that kind of time. Well, he does. But his phone is only at thirty-seven percent battery, and he’s not patient enough to go that long without entertainment. Fortunately, there’s a small hole-in-the-wall ten minutes from his apartment.

Aquariums & More doesn’t have a website, but according to Yelp, the “more” includes live pets. Half the Yelp reviews complain about hostile and unwelcoming employees, but that’s none of his business.

The pet store looks even shittier in person than it did in the picture. Multiple neon signs have been added since the pixelated, overexposed image was captured—probably somewhere in the early 1800s. Combined, they shine so brightly they distract from the puke-green awning, torn from years of weather, with faded navy font that looks like it’s trying to be Comic Sans but isn’t quite.

The visual assault is such that Jericho briefly overlooks the grime on the windows and how there seems to be something alive inside the trash can.

Any animal bought from this place is guaranteed to have three kinds of rabies and possibly congestive heart failure in addition to being intellectually dishonest and a kleptomaniac. It’s perfect for his sister, Shiloh, so Jericho spits a wad of tasteless gum into the cigarette disposal (he isn’t going near that trash can) and steps inside.

The bell on the door jingles merrily, but upon passing the threshold, there’s no one in sight: no customers, no pimply teenage employees, not even a grizzled old man to regale him with stories of putting live mice in freezers.

Along the entire front wall is what must be a six-foot-long, gargantuan tank full of…sand and wood? Jericho looks closer, blinking when he sees some small things skittering through the thick foliage. Oh, hermit crabs.

“They’re not for sale,” a rough voice says behind him.

He startles, but not enough to make a fool out of himself. Instead of swinging around to face whoever came up behind him, Jericho casually rolls his back. See? He isn’t bothered in the least.

“There’s a sign right there.” He points down at the far corner of the tank where Hermit Crabs $5 per ea. is written in Sharpie on an off-white piece of cardstock. It’s placed away from the reach of the fluorescent tank lighting as if someone doesn’t want it to be noticed.

A dark hand reaches into his line of sight and unceremoniously rips the sign off the tank. “That was a prank,” the other person says. “Feel free to ignore it.”

“Okay,” Jericho says—because sure, whatever—and turns toward the speaker. The voice made him expect someone at least moderately intimidating, but the fluffy hair, round cheeks, and full lips are suspiciously cherubic despite the rather genuine scowl. Also, this guy is, like, five feet tall, give or take a few inches. “Do you work here?” He’s dubious about whether or not this is customer service or an attempt at stealing his lunch money.

The guy rolls his eyes—which makes Jericho think the answer is no, and he’s about to be held at gunpoint in a pet store—and then he grabs the front of his mustard-yellow sweater and tugs the wrinkles straight to reveal a worn laminated tag that reads: Hello, my name is Harinder. The first thing Jericho notices is that his nails are painted black, although heavily chipped. The second thing he notices is the bottom of the nametag where the phrase How may I assist you? has been cut off at the bottom and heavily frayed.

Harinder drops the sweater and reaches up to brush his overgrown bangs out of his eyes, then folds his arms over his chest. It turns him into a puffball of rumpled wool and flyaway hair, which Jericho fails to find either professional or impressive. A hissing alley cat, at best.

Speaking of. “Do you have any kittens?”

If Harinder’s face looked offended before, now it looks straight-up murderous. “If you want a kitten, I invite you to look into one of the mills of inbred, abused, unloved, soon-to-be-abandoned, backyard-bred animals. Might I suggest Craigslist, or some cushy chain pet shop balanced on the rusty, beloved seesaw of quality photography and appalling ethics? There’re at least three of them downtown.

“If you want to pay five hundred dollars for an animal you’ll only care about until it stops being small and inoffensive, be my guest, but I’m afraid I can’t fff— I can’t help you.”

Jericho blinks very, very slowly. He didn’t miss that aborted f-bomb, but as with the Yelp reviews, that isn’t Jericho’s problem. He tries again. “Do you have any…cats?”

Hunching his shoulders around his ears, Harinder jabs a thumb at the wall behind him. “Cat kennels are through that door.”

There are, in fact, no kittens. However, the eight kennels filling in one side of the room give him enough to choose from. The moment he catches the attention of the room’s inhabitants, there’s a chorus of noise as all the cats come to the doors of their steel prisons to bat fluffy paws through the bars in a sordid appeal for pets.

Jericho obliges the nearest one, threading his fingers through a gap and allowing the animal to smash its head into them, purring enticingly. He wiggles his hand as best he can to facilitate a more effective petting motion. This one is a skinny tabby, and the note on the front of its—his—cage says he’s two years old and calls him Princeton.

It’s such an obnoxious yuppy name that Jericho can’t help but snort. What a terrible name for a cat. He shakes his head and moves to inspect the next prisoner.

In total, there are nine cats. Two green-eyed, gray longhairs inhabit one of the lower cages. They remain curled around each other, staring dispassionately at Jericho from the back of the kennel.

“Fuck y’all too,” Jericho comments, leaving both “Lacey” and “Casey” to their own shitty devices.

A ten-year-old Abyssinian boy going by the name of Sir Charles immediately becomes his favorite. Jericho loses about five minutes trying to cram his whole hand through the tight bars so he can stroke his sleek honey-colored fur.

He doesn’t think giving Shiloh a pet that might die soon is the best idea, and he isn’t prepared to take on his own cat, so he moves on.

He ends up two cages to the left, shoulder pressed against the wall, studying a creamy Siamese point. She has a shaggy medium-length coat, faint textured stripes, and piercing blue eyes, with which she regards him coolly before padding over to give his extended fingers an inquisitive sniff.

Her body is long and lanky. Regal, Jericho thinks for all of thirty seconds before he looks at her infocard and discovers that her name is Dumpling.

A short, surprised laugh bursts from his chest; Dumpling’s ears flick backward in disapproval. She’s perfect. At a solid four years, she’s old enough to know how to use a litter box and, hopefully, a scratching post, but isn’t quite aged enough that he has to worry about being strong-armed into frequent vet-related errands.

The adoption fee is sixty-five dollars. A little steep, but manageable. Before he can do anything about it, the door to the kennel room bursts open and Beethoven’s Sixth Symphony Performed Entirely by Cats nearly deafens him.

Harinder snarls. “What the f—” His teeth settle for a moment on his bottom lip. “—are you doing?”

“Just looking,” Jericho says, pulling his hand away from the cages and shoving it in his pocket as if he was doing something wrong, although he’s pretty damn sure petting cats in a pet shop is not actually illegal.

“I’ve heard people use their eyes to do that,” is the surly reply. Of course this jackass would go there.

“Gonna call the cops?” he asks, rolling his eyes. Jericho is used to threats of police intervention in his simple existence. No innocence when you’re Black. Even being albino doesn’t change that.

Harinder’s face clouds. “I wouldn’t.” Then he wraps his whole fist around a cable lying against the room’s back wall and gives it an unnecessarily forceful yank. A thick brown curtain rolls up to the ceiling, exposing a greasy window. Harinder doesn’t say anything more, but the message of “I can see you and will rain unholy hellfire down on anything that displeases me about your conduct” is clear.

Jericho doesn’t respond. He only finds his voice when Harinder turns toward the exit. “Hey, wait. I want to buy a cat.”

He turns around, jaw clearly set. “I. Said. We don’t sell cats, you—” He clamps his mouth shut.

“What are these here for, then?”

Harinder’s eyes flick to the kennels, then back to Jericho. “They’re up for adoption.”

Jesus fucking Christ. Jericho rolls his eyes again. “Fine. How do I ‘adopt’ a cat?” 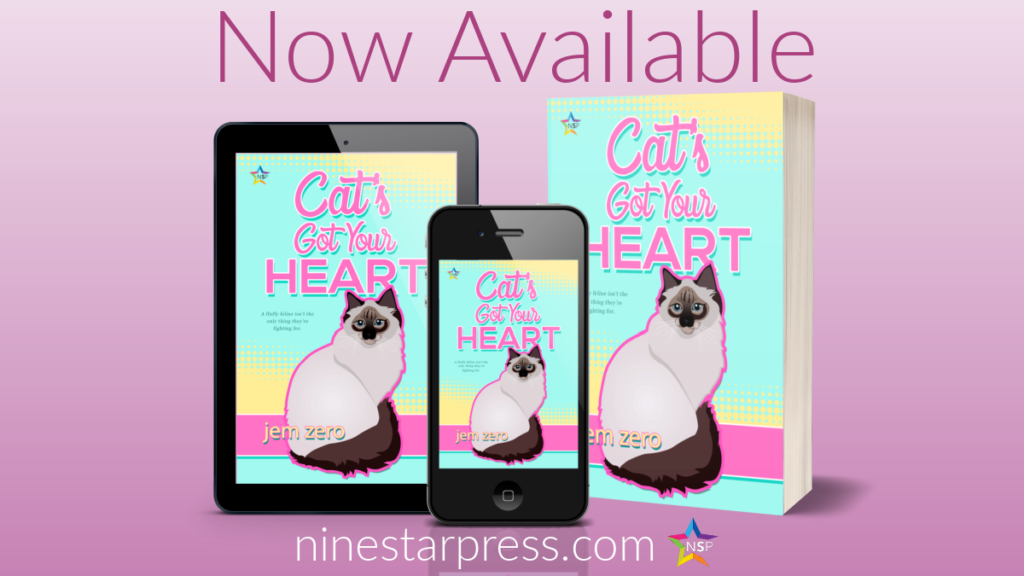 Jem Zero is a disabled lesbian who lives in a house built by zir great-grandfather with zir family and two rescue greyhounds. Zir work is unapologetically queer and strives to communicate the frustration of being limited by one’s meatsack & brainjuice. While arguing zir way through an Accounting Certificate, Jem makes a living as a portrait artist and, similar to most tortured creators, is attempting to establish zirself in creative writing.