“She snuck up on me and stole my heart…” 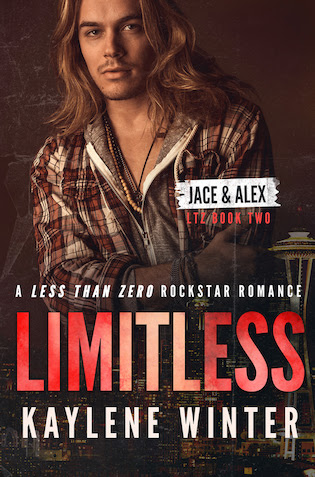 Friends-with-benefits was the only thing he was capable of.

Until free-spirited social media influencer Alexandria LeRoux made him an offer he couldn’t refuse.

For the first time in his life, Jace wants it all

Including a future with Alex.

Will one fateful night destroy his chance with her forever?

“I’ll travel the world for him…”

Ethereal animal-lover Alex had one goal in mind:

Conquer playboy Jace before they both left Seattle.

Her plans for him certainly didn’t include forever.

But their first time was so sublime, it ruined her for anyone else

What’s a girl to do?

Enjoy him in as many countries as possible, that’s what.

Except Alex has her own dreams and they’re already in motion.

Their lives orbit on different courses, but gravity always seems to pull them back together…

Unless a blast from the past blows their chance to smithereens.

LIMITLESS is book 2 in the Less Than Zero Rockstar Romance Series.

Under any other circumstances, spending Christmas in my hometown with my band, Less than Zero, would have been something to look forward to. Over the past few years, we’d spent the holidays together but we’d been on the road. In the early years, dinner would have been take-out food in a shared hotel room from whatever restaurant was open. After our success, the past few years had been spectacularly catered events.

My plan had been to immerse myself in the chaos at my Deveraux family home with the woman whom I hoped would represent my future. That’s not how it panned out. Instead, I was at our lead singer Tyson Rainier’s house watching him propose to Zoey Pearson, the girl who had stolen his heart almost a decade ago.

Ty and Zoey’s romance had permeated the fabric of LTZ since the day they met at our epic Mission show all those years ago, and I’d played a big role over the years in facilitating their star-crossed lovers myth. Gossip sites and social media couldn’t get enough of them. Fan fiction about their love story had taken a life of its own ranging from bubble-gum, heart-eyed, teeny-bopper swooning to the dirtiest erotica. Which translated to tremendous profits in both record and merch sales for all of us.

Our crazy rock star success story meant that we were all now rich enough to retire. We were too young for that, but every single one of us was looking forward to having at least a year off to chill, reconnect with family, and have some personal time to relax for the first time in a decade. Personally, I had been looking forward to settling down as well.

So, my feelings about being here tonight were bittersweet. After so many years apart and the ups and downs of reuniting, they were finally together and getting married. I loved them both, and should only have positive, happy thoughts today.

Except my world had crashed down around me, and no one knew it.

Happiness for my friends was far from what I was feeling. More like tired. Terrified. Pissed. Confused. Heartbroken. Petrified. Scared. Panicked. Alone.

So yeah, I needed to be here today. Ty and Zoey were also my family. Despite my own problems, I loved them both.

I couldn’t focus, though, with all that was on my mind. Sure, I kept a slight smile fixed in place and my gaze deliberately aimed at the happy couple to appear normal. Inside, my stomach churned and my brain was all over the place. My entire future was up in the air, a fact that I’d kept secret from everyone but one person.

Like a beacon, my eyes were drawn to her.

Alexandria Le Roux, Zoey’s best friend, was the ethereally beautiful woman of my dreams.  Her honey-blonde hair bounced like sunbeams off her tanned, defined shoulders. She clapped her hands gleefully when Zoey kissed Ty and accepted his proposal. Tall, lithe, with legs for days and the most perfect, perky breasts, Alex wore a fitted, white, off-the-shoulder sweater, skintight Levi’s and red jingle-bell earrings.

And, her ever-present black Frye boots. Boots that had traveled the world. Sometimes, even with me.

When she was only 15, Kaylene Winter wrote her first rocker romance novel starring a fictionalized version of herself, her friends and their gorgeous rocker boyfriends. After living her own rockstar life as a band manager, music promoter and mover and shaker in Seattle during the early 1990’s, Kaylene became a digital media legal strategist helping bring movies, television and music online. Throughout her busy career, Kaylene lost herself in romance novels across all genres inspiring her to realize her life-long dream to be a published author. She lives in Seattle with her amazing husband and dog. She loves to travel, throw lavish dinner parties and support charitable causes supporting arts and animals.