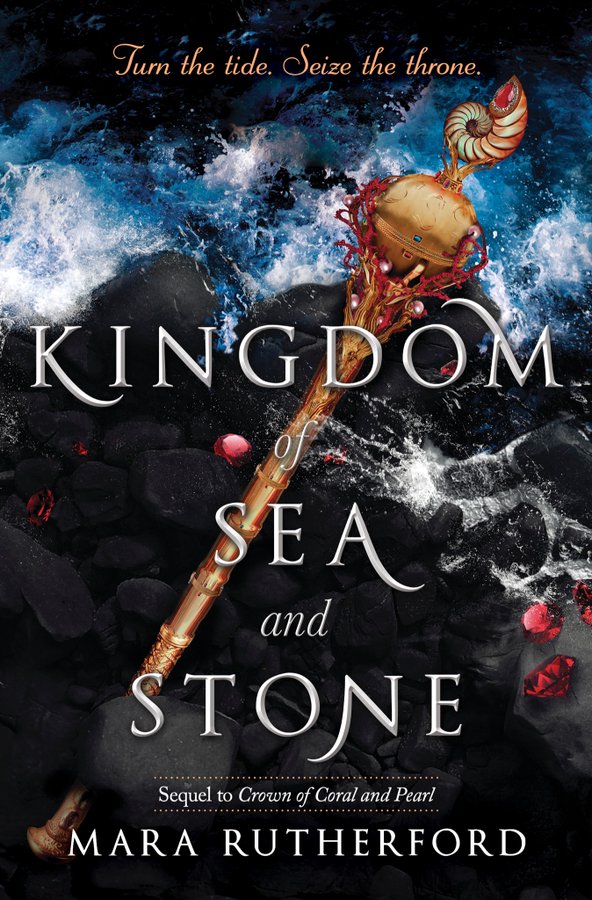 The Cruel Prince meets Ash Princess in this thrilling fantasy, the much-anticipated sequel to Crown of Coral and Pearl.

Ever since Nor was forced to go to a nearby kingdom in her sister's place, she's wanted nothing more than to return to the place and people she loves. But when her wish comes true, she soon finds herself cast out from both worlds, with a war on the horizon.

As an old enemy resurfaces more powerful than ever, Nor will have to keep the kingdom from falling apart with the help of Prince Talin and Nor's twin sister, Zadie. There are forces within the world more mysterious than any of them ever guessed—and they'll need to stay alive long enough to conquer them...

On the day Zadie and I turned thirteen, Father surprised us with a trip to the floating market—our first glimpse of the world beyond Varenia.

I spent the journey perched on the bow of our family’s boat, welcoming the cold ocean spray on my face and the wind in my tightly plaited hair. Zadie sat between Mother and Father, her knuckles white on the edge of the bench, her golden-brown eyes wide with anticipation.

As we approached, I eagerly took in the sight of the intricately carved wooden boats, with their colorful wares and raucous merchants. While Father traded our precious Varnian pearls for drinking water and food, Mother made Zadie and me sit next to each other near the front of the boat where everyone could see us. She had shown us off to every villager in Varenia a hundred times, but today an entirely new audience was at her disposal.

Men and women smiled at us as we floated past, likely because identical twins were a novelty.

“Lovely girls,” one of the merchants said, and I watched as Mother swelled with pride like a pufferfish.

She thanked him and urged us to do the same. But just as I started to speak, the man craned his neck to get a look at the right side of my face.

“Pity about the scar, though.”

I could feel Mother wilt behind me like a seaf lower left out in the sun.

Zadie, embarrassed, settled into the bottom of the boat where no one could stare at us, but I stayed where I was, watching as Father looked over a basket. I was used to these kinds of comments by now, but it felt as though Mother would never accept that one of her daughters was a damaged good, just like the basket Father handed back to the merchant, gesturing to a hole in the  bottom.

I turned to see a young man—the son of the trader, presumably—motioning for Zadie and me to come closer.

Zadie eyed him suspiciously. Mother had warned us that Ilarean boys were beneath our notice. We were the most beautiful women in the world, after all; that was why we were considered worthy of marrying royalty.

But with my scar, I wasn’t going to marry royalty, and I was curious to see what the boy wanted. I scooted to the edge of the boat. He looked like any boy in Varenia, though his clothing was finer and his hands were as smooth as Zadie’s.

He glanced around to make sure no one was watching, then handed me a small glass bottle. “For you,” he said.

I held it aloft for a better look. The contents were disappointing: sand, salt water, and a tiny yellow shell. All things I could find in Varenia, I thought glumly. But it was the only gift I’d ever received from a boy, and I politely thanked him.

When we returned home with our food and fresh  water, I placed the bottle on a shelf.

“What’s this?” Mother asked, immediately recognizing that there was a foreign object cluttering her kitchen.

“It’s a wandering crab,” Father replied, reaching into the bottle. For the first time, I noticed the tiny legs poking out from the shell. “They usually live closer to shore, but I’ve seen a few in my time. They find a discarded shell and make it their home, and when that one grows too small, they choose another, larger shell and move in.”

I held out my hand, fascinated. Father passed the crab to me and it scuttled across my palm, tickling my skin. “It carries its home on its back?”

“That’s right.” Father gently took the crab from me before it could plummet to the floor. “It has everything it needs, right here.”

I smiled, pleased with the idea of such an untethered, independent existence. “It can go anywhere it wants to.” I glanced around our little house, which already felt too small for my imagination, and sighed wistfully. “Lucky.”

“Nonsense.” Mother plucked the crab deftly from Father’s hand. Without ceremony, she f lung it over the balcony, where it immediately sank below the surface of the water.

She ignored my startled cry. “You have everything you need right here in Varenia. Do you think they’d actually accept you out there, with your…” She trailed off, gesturing vaguely to my cheek. “Now hurry up and help me. This food isn’t going to put itself away.”

For a moment I thought Father might protest, but he simply retreated to the boat. Zadie frowned sympathetically.

I watched the spot where the crab had disappeared, knowing it was probably well on its way to somewhere new. It was only a crab, yet already it had seen more of the world than I ever would. I wondered if that was why the young man had given it to me, more of a cruel joke than a gift.

“Lucky,” I whispered again, thinking not just of the crab but also the trader, his son, the ocean, and everything that had more freedom than a girl born in Varenia. Then I did as I was told.

Mara Rutherford began her writing career as a journalist but quickly discovered she far preferred fantasy to reality. Originally from California, Mara has since lived all over the world with her marine-turned-diplomat husband. A triplet born on Leap Day, Mara holds a master's degree in cultural studies from the University of London. When she's not writing or chasing after her two sons, she can usually be found pushing the boundaries of her comfort zone, whether at a traditional Russian banya or an Incan archaeological site. Mara is a former Pitch Wars mentee and three-time mentor.
Find out more on her website.
Promotional post. Materials provided by the publisher.