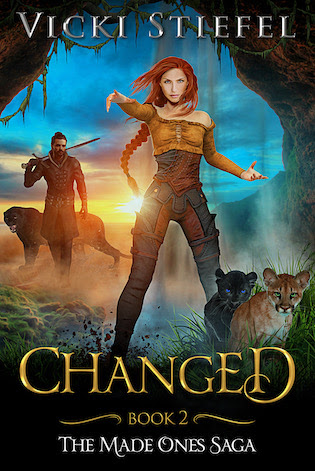 What if you could be young again? Would it be a dream come true or truly a nightmare?

That’s the startling reality retired circus trapeze artist Breena Balážová awakens to on the world of Eleutia in her own re-engineered younger body. For a woman whose death on Earth was inches away, it seems like a second chance at life. But in this parallel world, where horses fly and animals and humans are symbionts, Bree is intended as breeding stock to balance the plummeting female birthrate.

As she searches for her missing sisters, who were pulled to Eleutia with her, Bree also must survive assassination attempts, the growing threat of war, and her unexpected attraction to the arrogant animal Clan Alpha, Gato, a man with terrible burdens and secrets.

The animal Clans join forces to combat a dark conspiracy that will shake the foundations of their world, even as Bree’s search for her sisters grows more desperate and dangerous.

If Bree has any hope of finding her sisters and fulfilling her own destiny, she and Gato must carry out a perilous deception, their success or failure deciding not only their own fate, but that of all Eleutia.

Bree’s arrival on Eleutia is rather shocking.

Breena Boadicea Balážová pushed up from the scratchy bed of leaves and spat out the dirt in her mouth.

Well, this sucks. Where the hell am I?

A tendril of hair slithered from her shoulder to dangle in her face. She went to swipe it away and… “What. The. Fuck?”

She pushed to a sitting position. Everything ached. And she was hot. Then cold. Then dizzy.

Screw that. Bree grabbed a plait of hair and held it in front of her. Red. Fire-engine red, a horrible color. Her natural color. Which was ridiculous. Her hair hadn’t been natural since she’d first dyed it black at fifteen.

Her nails, too? She curled her fingers. No polish, nails cut short and squared. Last week, she’d chosen blood red for her manicure.

“Kit! Sybi!” Where had they gone off to?

Bree was having some kind of out-of-body experience.

They’d been hiking in Maine’s Acadia National Park, and then they’d fallen, the ledge where they’d stood giving way. No, not exactly. The ledge had vanished. She could still hear Sybi’s screams.

With precision and deliberation, she took the monster Fear and tucked him into the box she’d crafted eons ago for her trapeze work. A panic attack now would not help matters.

Bree blew out a long breath and pushed to her feet, stumbling, her legs tangled in some weird fabric. She plucked at the hideous thing, an unbecoming sack of blue. The damned dress covered her from ankle to neck, shoulder to wrist.

The sun blazed high above rows of dead corn stalks, and she lifted her hand to her forehead to see where she was. Nowhere she recognized, and she began to walk, stumbling at first. Once she got her legs under her, she began to run up and down the vast sea of dead corn shouting her sisters’ names. Time and again, she’d stop and listen. Only the squawk of crows answered.

Slumping to the ground, it took minutes for her breath to ease and her head to clear. They weren’t here. A burning thirst got her moving again, and she strode across the field toward a distant pond, wincing at the small cuts and bruises her bare feet endured. She could still be in Maine. But she wasn’t, that much was obvious.

If she’d been abducted, then where were her abductors?

More important, where were Sybi and Kit? Were they okay? They had to be. Period.

The air smelled clean and fresh, the small pond reflecting the crystalline blue sky. At the pond’s edge, Bree found a spot clear of grasses and knelt, the water making her salivate. She leaned forward to scoop up a handful. And screamed.

A murder of crows startled into flight.

Bree dug her fingers into the mud and leaned above the still water. The Breena who stared back at her wasn’t her at all. At least not 56-year-old her. She turned her face left, then right, the reflection echoing her movements, then slumped back on her haunches. Her trembling hands traced the contours of her face and throat. No extra chin. No puffy jowls. Not possible.

She leapt to her feet, checked that no one was around, and pulled up her dress. Her body. Her body.

The lines and curves of her twenties flowed across her flesh. She touched her taut arms, her flat belly, her curved hips. All smooth and with the firmness of her youth. Gone were the middle-aged pooch, the saggy neck, the drooping ass. Now, muscular thighs from her aerialist days flowed to strong calves and high-arched feet. Except her legs were hairy! Her hands cupped her breasts. Oh, no. They were pre-implant, pert but small, the flowers tattooed across them, gone. She pushed down the dumb dress so it covered her.

Her nails, her hair, her breasts… Her armor was gone. Whatever had happened, whatever had dragged her back to her pre-makeover body, whatever was going on, it was weird and horrible. She was like a turtle without its shell. She needed her armor.

Vicki’s fantasy romantic suspense series, The Afterworld Chronicles, launched with Chest of Bone, followed by Chest of Stone and Chest of Time. She is currently pounding the keys on her series’ fourth novel, Chest of Fire, and the first in a new series, The Made Ones Sags: Altered.

Her mystery/thrillers include Body Parts, The Dead Stone, The Bone Man, and The Grief Shop, a Daphne du Maurier prize winner. All feature homicide counselor Tally Whyte. All are available as ebooks.

She co-wrote (with Lisa Souza) and photographed the 10 Secrets of the LaidBack Knitters. With her late husband, William G. Tapply, she ran The Writers Studio workshops in creative fiction.

Vicki taught fiction writing and modern media writing at Clark University.
She loves both a well-crafted sentence and unlocking the doors of a student’s imagination.

She grew up in professional theater and planned to become an actress, with a bent for song and dance. She didn’t. Instead, she’s been a professional photographer, a high-school teacher, a hamburger slinger, a scuba-shop manager, and an editor.

She’s Blake’s and Ben’s mom, her favorite role of all.

Her passions include scuba diving and fly fishing and knitting; photography and movies; vinho verde and bourbon (not together!); Maine lobster and chocolate (also not together!); and musical comedy scores, which she sing in the shower, unfortunately not an Equity venue; and a fascination with people in all walks of life.