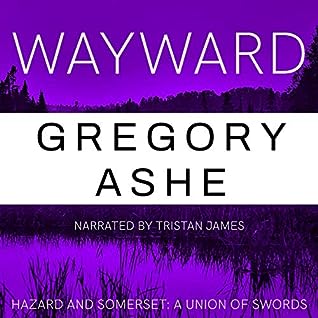 
Emery Hazard is trying to plan his wedding, even though his fiancé, John-Henry Somerset, isn’t exactly making things easy for him. To be fair, Somers has been distracted lately; his father is running for mayor in a hotly contested election, and their hometown is splintering under the weight of divisive politics.

In a matter of hours, those poisonous politics invade Hazard’s life in a way he couldn’t have imagined. Glenn Somerset, Somers’s father, shows up on their doorstep, and he wants two things: first, for Hazard to neutralize a blackmail threat; and second, for Somers temporarily to move out of the house he shares with Hazard, part of public relations stunt to win the election. To Hazard’s shock, Somers agrees.

Determined to lose himself in his work, Hazard takes on a missing person’s case, but his investigation only leads him deeper into the tangled web of small-town politics. To find the truth, he must face off with the viciously rich who rule Wahredua—and with the poor, desperate, and marginalized, who fight just as viciously in their own way.

When Hazard’s investigation uncovers a murder, he is forced to work with Somers to bring the killer to justice, despite their fractured relationship. But the sudden news that Hazard’s father is failing fast threatens to put an untimely end to the case—and, in doing so, jeopardize Somers’s last-ditch effort to repair his relationship with his own father.

The killer, though, has an accelerating timeline, and in a world of wayward children, every relationship is fraught with hidden dangers.

I first stumbled across this series when...some of my friends started reading it and the reviews were to say the least glowing and then I discovered that not only was it on audio but the narrator was one of my top five favs when it comes to audio books...so, needless to say I needed to check this out and now it's without a doubt I am seriously addicted to Hazard and Somerset.

Once again Tristan James has given voice to John Henry Somerset and Emery Hazard along with all the other characters we've met in the town of Wahredua creating a rich and vivid audio experience that checks all the boxes for me when it comes to what I look for in an audio book.

Here in the fourth book in the 'Hazard and Somerset: A Union of Swords' series the journey once again puts Emery and John Henry's relationship top the test. I spent most of the previous book frustrated beyond belief with John Henry Somerset and to be honest I'd hoped to see him get off of the hot seat this time around...well, what can I say hope springs eternal and while my frustration (interspersed with occasional bouts of rage) didn't last quite as long this time around I have to admit my loving and patient hubby was subjected to more than one suppertime diatribe about how John Henry screwed up this time.


The test begins when John Henry's father knocks on their door demanding that Emery deal with blackmail threats to his political aspirations and that John Henry move out of his and Emery's home to help further his political career. Much to Emery and my surprise and disappointment...John Henry does as his father request. Leaving things a bit strained between the two men. Add in that Emery's father is terminally ill and his health is failing fast, John Henry and Emery find themselves once again working together to solve a murder case and the fact that John Henry's partner on the force and one of Emery's Ex's is are both still trying to stir things up between these two men and it's not hard to imagine their relationship going up in flames.

For me it comes down to the fact that these are two strong willed people and it's inevitable that their wills are going to clash add in things that are beyond their control...things like family and friends whose intentions are questionable at best and you've created a relationship minefield.

I've told myself after and before each book that I'm not going to got so emotionally invested and I cannot lie I've decided that I need to pick my battles and this is one that I'm not going to win. I'm invested in these stories...in this couple in spite of the fact that at times things feel toxic between these two men, I can't help but continue to believe that ultimately these two men will find a way to make things work for them and that ultimately they'll get the happiness that they deserve.

I think the hardest stories to read are those that truly invoke the readers emotions making them feel what characters in the story are feeling, especially when those emotions aren't the kind that inspire sunshine and rainbows. I don't think any of us are immune to feelings that inspire sunshine and rainbows, but for me it's those other emotions that can truly test an author's writing skills. Not that it's impossible but it's definitely harder to make me cry or feel anger and rage when I'm reading a story because I know that at the end of it all chances are things will work out and those characters that I've come to care about so much ultimately will be ok, but sometimes even if we know the destination, it's the journey that leaves us wrecked and Gregory Ashe has once again delivered one heartbreaking and gut wrenching journey with this addition to the series.

An audio book for "Wayward" was graciously provided by the author in exchange for an honest review.