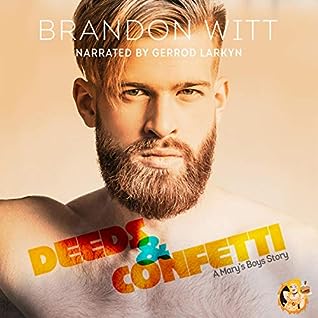 Steven Conley loves the excitement of owning his own Hamburger Mary’s restaurant in Denver, Colorado, and his chosen family of coworkers makes life even better. Steven never regretted leaving the corporate grind behind until his father’s harsh deathbed words leaves him doubting himself.

Ryan Fuller abandoned a lucrative career to start his own party-planning business, but he keeps afloat by coordinating funerals for the local mortuary. When Ryan bumps into Steven—his best friend’s uncle and the man Ryan has secretly crushed on forever—the attraction explodes into a night of passionate abandon for both men.

Steven is blown away by the care and deep connection he feels for the hot young mortician—until Ryan admits who he really is. Reeling from the recent upheaval in his life, Steven must decide whether to give Ryan a chance. To find love, they must risk it all....

In the immortal words of Miro Jones & Ian Doyle... (and probably thousands of others)...
"Winner, winner chicken dinner." This one was it for me. I wouldn't have thought that Steve's story would turn out to be the one I enjoyed the most but it was.

It's got an age gap...I mean serious age gap...not a hard line for me, but still a bit of a grey area at times and it turns out that I was ok with it this time around.

Steve as anyone who's read even one of these stories will know is the owner of Hamburger Mary's and we've seen him a bit of him in every story so far but now in 'Deeds & Confetti' the final novella in this series it's all about Steve...and Ryan.

Before Hamburger Mary's, Steve belonged to the corporate world but it was consuming his soul so he took a risk and sank everything he had...mind, body, soul and finances into Hamburger Mary's and he's never looked back or at least he hadn't until his father's dying words shredded his confidence and left him doubting every choice he'd ever made (it's in the blurb).

Ryan was on the fast track to becoming the golden boy of the art world and with each painting he sold, he could feel his muse abandoning him and what should have been a joy filled passion was becoming a life sentence as each painting became harder and harder to create. His solution was to walk away and start a catering business. Something that let him use his creative spirit to help others celebrate the joyful times in their life and as soon as he has his business off the ground he won't need to coordinate funerals for the local mortuary...but in the meantime...

When Steve spots the sexy young man at his father's viewing and fails to recognize him, he doesn't hesitate to initiate what quickly becomes a very hot hook-up. But when Ryan tells Steve who he is...things become complicated from Steve's perspective.

I loved Ryan. While he was considerably younger at 27, than Steve's 45ish years. Ryan knew what he wanted...what he'd wanted for nearly as long as he could remember and that was Steve. Ryan's willing to wade through all of Steve's barriers to get through to him and starts with a challenge for Steve to go on a date with him and at the end of the night he dares him to deny the connection that he knows they both feel.

In spite of Steve's bravado we're clearly shown his vulnerability as well. Sadly words are some of the strongest weapons that anyone can wield...especially a parent and even sadder we tend to remember the bad more vividly and longer than we do the good. Steve's struggles to move past his father's cruel and hurtful words is a very real thing that many people have faced.

While Ryan's parents are loving and supportive. They aren't without their flaws...they want their son to be happy but they don't seem to grasp that adult children need to decide what form that happiness takes.

I think for me the overall premise of this story was what held the most appeal...two men, both with successful careers that essentially has left them miserable until each man takes control of his life and makes the changes that he needs and while they've both had to deal with similar circumstances the motivation has been a very different source.

I enjoyed having Gerrod Larkyn provide the narration for this final installment of Mary's Boys and look forward to following him in future to see how his talent progresses as he gains experience in his craft.

Overall I found Mary's Boys to be an enjoyable and entertaining listening experience. Would I have liked more from one or all of the stories...very probably but given that these were novellas and not full length novels I feel like the author utilized every word to it's maximum creating a story that I as the listener was readily able to envision and enjoy.

An audio book of 'Deeds & Confetti' was graciously provided by the author in exchange for an honest review.