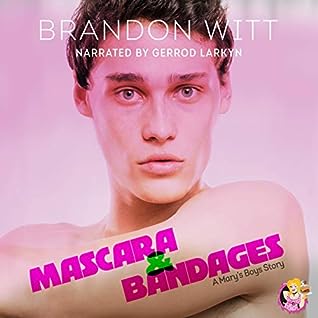 'Mary's Boys #4, Mascara & Bandages' takes us backstage at Hamburger Mary's...
as we meet Ariel Merman otherwise known as Zachary Cooper, when the make-up comes off.

While readers have met Ariel/Zach in previous stories, just like Zach it's not until this story that we meet Dr. Teegan Chau when Zach is the victim of a hate crime that results in him being taken to the hospital.

Sadly what happens to Zach could easily be the headlines of newspapers across the world. Too often the inspiration for fiction can be drawn from reality and while I'm only going on supposition with this thought...I wouldn't find it surprising...sad, but not surprising to learn that this was the case for Zach's story.

For Zach unlike Cody or Vahin the staff at Hamburger Mary's has become his family not because his family wasn't awesome. Zach grew up with loving and supportive parents...unfortunately Zach's parents are no longer with him. While Teegan has an excellent relationship with his ex-wife, who wants him to get on with his life and be happy. His relationship with his parents isn't quite so simple. They love him...just not all of who he is and when he tells his parents about Zach...sadly in my eyes they fail him.

'Mascara & Bandages' for me worked a whole lot better when it came to the relationship between Zach and Teegan. Things took time to develop between these two men and there were obstacles and a set back or two but both men were willing to keep trying until they got it right.

I loved that Teegan was supportive of Zach without being overbearing and turning Zach into a 'damsel in distress waiting to be rescued by a knight in shining armor' just as I loved that Zach showed a core of inner strength and faced whatever challenge came his way no matter how scared he was internally he put on his big boy pants and did what he felt he needed to do. Being scared isn't wrong nor is it a sign of weakness it's how that fear is dealt with that truly shows what a person is made if. For Zach the fear kept him cautious but he never allowed it to truly rule his actions.

Once again Gerrod Larkyn has provided the narration for this story and with each story Mr. Larkyn's voices are becoming more consistent and I feel like he's becoming more comfortable with the characters as he gets to know them better and brings them to life for the listener.

While the previous stories were enjoyable 'Mascara & Bandages' is just a step or two ahead in that I enjoyed the romance as much as the rest of what was happening in the story and everything seemed to hold a better balance.

An audio book of 'Mascara & Bandages' was graciously provided by the author in exchange for an honest review.