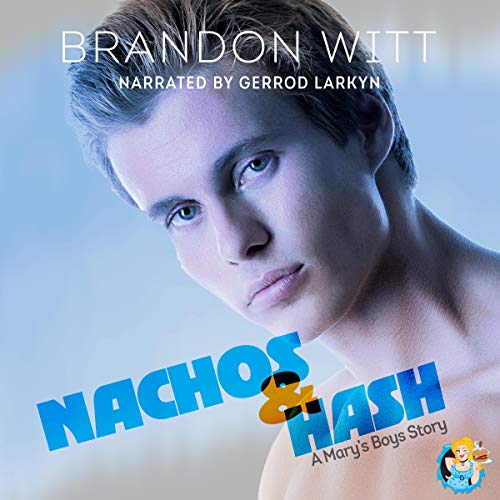 
Darwin Michaels is living his dreams in the Mile High City. While Denver offers the perfect job, scrumptious dining, and whirlwind dating options, Darwin is losing hope he’ll find the right man to spark his interest for more than a one-night stand—until he sets eyes on Cody Russell.

Cody has just accomplished his life’s goal—get the hell out of Kansas. In one fell swoop, he lands a job at Hamburger Mary’s and gets a newfound family and the chance to be with other gay people! All that’s missing is someone special. But when Darwin shows his interest, Cody is sure it’s too good to be true. After all, what can Darwin possibly see in the high school dropout serving him nachos?

As Darwin falls in love, Cody struggles to realize his worth. When his past threatens the fragile life he is building, Cody spirals into a moment of dark desperation. But Darwin is determined to show Cody that love and family and home are there for him… will Cody accept what is offered?

'Nachos & Hash' is the first story in Brandon Witt's series 'Mary's Boys' and while I can't quite say that this is a new to me author...but with only having enjoyed 2 stories previously, it's a close call...but not quite, so let's just say he's a nearly new to me author and leave it at that.

However, 'Mary's Boys' definitely has a more humorous side to it than my previous experiences. I was a little leery going into this series that with the stories being shorter, each audio book is approximately 3.5 hours give or take a few minutes. This left me concerned that maybe the characters would fall a little flat or maybe even the story if things weren't adequately fleshed out. Thankfully this concern turned out to be a non-issue.

'Nacho's & Hash' is about Cody, one of the waitstaff at Hamburger Mary's and Darwin who starts out as one Cody's customers.

Darwin's at Mary's on a blind date. He's got his life on track and things are going good...now he just needs to find someone to share it with. As the evening progresses Darwin quickly figures out that his date is definitely not the one, but he also realizes that the cute little waiter who's been serving them food and drinks all night is far more interesting than the person he's been sharing a meal with and maybe he needs to hang around and see what could happen between them.

Despite the closeness in their age...there's only 3 or 4 years between them. I believe Cody's 21 and Darwin's 24 (or something close to this) these men are at very different places in their lives. Darwin's established and ready to settle down...Cody's finally escaped the small town in Kansas where he grew up and he's just starting to discover a life that's his and a family that loves him because sometimes the family that we're given isn't the one one we need and for Cody it's the family that he's made at Hamburger Mary's that helps him to discover who he truly is.

Darwin and Cody were such a sweet match. I loved that even though they were at very different places in their lives there wasn't a big age gap. It was simply a matter of different life experiences. While the road to love wasn't smooth for these two young men, it also wasn't filled with a lot of unnecessary drama...this one was a sweet, simple romance with just enough going on to keep things interesting and enjoyable.

'Nachos & Hash' was filled with interesting characters that I've discovered have stories that are every bit as interesting and enjoyable as Darwin & Cody's and while I got to meet some of the characters who will appear in future books I also have several new characters to look forward too.

Gerrod Larkyn was the narrator and for the most part things were ok. I had no difficulties with the voices he provided for the character there conveyed emotion and in terms of understanding them and distinguishing one voice from another this was not a problem, however, there were times that I didn't feel like a characters voice sounded the same as it had in a previous conversation and while this caught my attention it wasn't so different that I couldn't tell who was speaking or that I was distracted from the story.

It's possible that I'm assuming wrongly here but I also noticed that 'Mary's Boys' are the only audio books narrated by Gerrod Larkyn...I could be wrong about this but a quick peek on audible.com tells me that Mr.Larkyn has only narrated the four titles in 'Mary's Boys' which leads me to the conclusion that this was his first audio narration and having said that I think it's very possible that future endeavors will produce an even better product...after all practice makes perfect...right?