ARC Review: Catch A Tiger By The Tail by Gabbi Grey 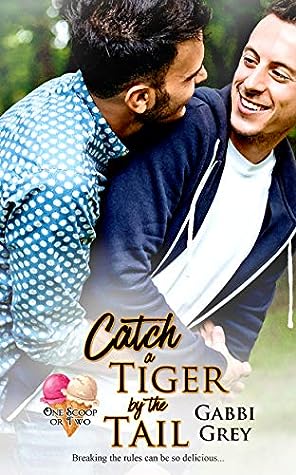 Thomas Walsh knows the number one rule in the film industry. Don't get involved with the talent. But resisting the urge to take the big screen to the bedroom can be hell when the lead actor on the set looks good enough to eat...one slow lick at a time.

Peter Erickson's latest role as a gay man hits a little too close to home. He's still in the closet and secretly grieving the death of his lover. Then an enchanting production assistant catches his eye, and he's surprised by the instant attraction that stirs more than his wounded soul.

When the two men are caught on camera in a very intimate pose, both Thomas and Peter are afraid they've caught a tiger by the tail.

This was a sweet, rather adorable and highly romantic book, the first in a new series, and a quick read to boot. It's full on insta-love though, and that isn't really my thing. It took me a little while to believe in the connection between Thomas and Peter, especially with the age gap.

Let us start at the beginning though, where we meet Thomas Walsh, 28 years old and a production assistant in Vancouver (the Canada one). He left his home town and his family 10 years ago, together with a secret that still haunts him to some extent. He knows not to fall for the actors he comes in contact with, and has done pretty well for himself so far.

Enter Peter Erickson, 42 and famous, and still grieving after his long-term secret partner's death. He arrives on set for the new movie, and is told that instead of a female lead, he'll have a male counterpart playing the lead opposite him. After the initial shock, Peter seems to get over it pretty quickly and filming begins shortly thereafter. I did find it a bit odd that the director didn't really have the two leads read with each other ahead of time to see if there's chemistry, but I don't really know much about the film business so maybe that's how these things are done.


Peter doesn't feel a need to come out, especially after having hidden for so long at his late partner's insistence and the potential of ruining his career, and he's also not looking for anyone new. Except someone catches his eye on set - the young production assistant who introduces him to tiger tail ice cream, an abomination in my humble opinion (a combo of orange and licorice ice cream, yuck!) and some other things Peter hasn't really paid much attention to so far.

Their slowly developing romance is cast into the spotlight when they're photographed in what seems to be an intimate moment eating ice cream, and this is also where the author lost me for a while. Peter was initially described as not wanting to come out, but once the proverbial cat is out of the bag, he seems just fine with it, and there's not a whole lot of drama or angst. Thomas' secret is revealed, and Peter is very supportive. There isn't a ton of sex, but what we do have is nicely done and furthers the connection.

The book is almost harlequin-esque in its plot and writing, and obviously not very realistic, but it's certainly an enjoyable, solid three star read for a lazy afternoon. Give it a try. Just skip the orange and licorice ice cream.