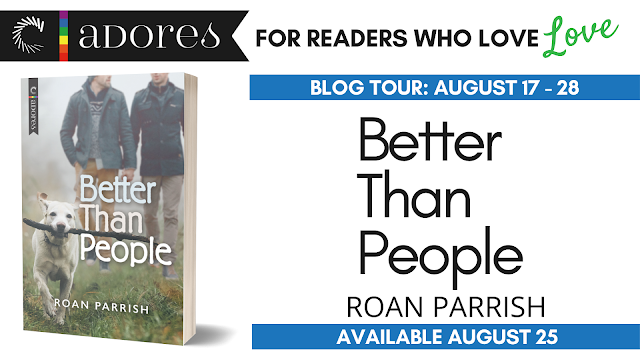 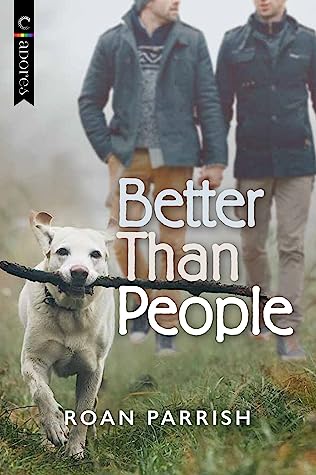 Simon Burke has always preferred animals to people. When the countdown to adopting his own dog is unexpectedly put on hold, Simon turns to the PetShare app to find the fluffy TLC he’s been missing. Meeting a grumpy children’s book illustrator who needs a dog walker isn’t easy for the man whose persistent anxiety has colored his whole life, but Jack Matheson’s menagerie is just what Simon needs.

Four dogs, three cats and counting. Jack’s pack of rescue pets is the only company he needs. But when a bad fall leaves him with a broken leg, Jack is forced to admit he needs help. That the help comes in the form of the most beautiful man he’s ever seen is a complicated, glorious surprise.

Being with Jack—talking, walking, making out—is a game changer for Simon. And Simon’s company certainly…eases the pain of recovery for Jack. But making a real relationship work once Jack’s cast comes off will mean compromise, understanding and lots of love.

A few days later, a storm blew in while Simon was out walking the pack. It started as a shower that sent Mayonnaise and Pickles scampering inside, but within twenty minutes was a gusting squall that darkened the sky and drove rain sideways against the windows.
Jack paced. Well. Jack swung himself back and forth in front of the living room window on his crutches until he had to stop because it was too tiring. It hadn’t had the same effect, anyway.
After another ten minutes, he lowered himself to the floor gingerly and built up a fire, wanting the animals to be able to warm up when they got home.
Yeah, the animals. It’s definitely them that you want to warm up.
After another ten, he brought armloads of towels from the bathroom to the couch so he could dry the pack off when they got home.
After another ten, he was able to admit he was worried. Puddles hated the rain. Rat was so small, and…and… He huffed out a breath.
Simon. He was worried about Simon.
Simon felt like part of the pack.
As if conjured by the thought, Simon burst through the door, a sodden, dripping mess. Pirate, seeming unperturbed, made a beeline for the fire and began to clean herself, and Rat followed, shaking off her skinny legs as she went; Dandelion ran right to the kitchen in hopes of a snack.
If Jack had been in fighting form, he would’ve had the towels on Bernard faster, but as it was, just as he turned to grab them, the huge dog shook himself, and Jack watched as if in slow motion as Simon got sprayed with another round of rain.
“Oh Jesus,” Jack said, as Simon slumped resignedly, but he couldn’t help but chuckle at the picture it made. Bernard, satisfied he’d wrung himself out, flopped in front of the fire to toast, which left only Puddles and Simon, leaning against each other, soaked and miserable.
“Aw, buddy,” Jack said. He was talking to Puddles, whom he approached with the towels he hadn’t been quick enough with for Bernard, but he included Simon in his sentiment, if only to himself.
He rubbed Puddles as dry as he could and then the dog slunk off to the bedroom, no doubt to soak a dog-shaped damp spot into his blanket and sheets. Making a mental note to change them later—fine, to ask Charlie to change them—Jack turned to Simon.
“Simon,” he said, and the man’s eyes met his. “Come inside, man, let me get you some dry clothes.”
Simon eyed his soaked boots, jeans, and sweater currently dripping onto the doormat. Jack wanted to tell him he’d already have to clean everything to get rid of the wet dog smell so a little more rain wasn’t a big deal. But for some reason, instead, he picked up the remaining towel from the couch and swung over to stand in front of Simon.
“Here,” he said, and he wrapped the towel around Simon’s shoulders and drew him close enough to rub his arms through it.
He heard Simon’s intake of breath and had the brief wild wonder if Simon’s mouth would taste of rain if he kissed him.
Then Simon let the breath out and leaned ever so slightly into Jack.
“Get your boots off and you can take a hot shower, okay? I’ll get you some clothes.”
Simon blinked up at him.
“Okay?”


Simon nodded and gave a ghost of a smile.
Since the first time they’d really talked the week before, they’d lingered over pickups and drop-offs, sometimes talking; sometimes Jack talking and Simon texting. Jack still couldn’t tell what made the difference in the times when Simon could speak and when he couldn’t. He appreciated the gift of Simon’s words when he managed them. But Simon via text was smart and honest and a little bit snarky, and he liked that too.
Now, standing so close, he felt like he should be able to tell whether words were forthcoming or not, as if the fanfare that announced their appearance would stir the very air between them.
But, no. He still couldn’t tell. What he could tell was that Simon was shaking with cold and his wool sweater was so sodden that it might as well have been dumping water down his back.
“C’mere, let me take this,” Jack said, tugging at the sweater. Simon’s eyelashes, spiked with rain, fluttered and he lifted his arms to help take the sweater off. It was plastered to his shirt beneath, so when the sweater came off so did it.
Jack couldn’t help but notice that Simon was lovely beneath his clothes. Angular and smoothly put together, though he was shivering. Jack dropped the sweater to the floor with a thlump and slung the towel back around Simon’s shoulders.
“Come on,” he said softly, and led the way to the bathroom.
He left Simon to his shower and fetched sweats for him to wear from his bedroom, where he did, indeed, find a sheepish Puddles on the bed.
He stroked Puddles’ damp nose and Puddles licked his hand. Worried Puddles might be chilly, Jack slung the blanket over him and gave him a rub.


“You like Simon?” he whispered. Puddles yipped. “Yeah. Yeah, me too.” 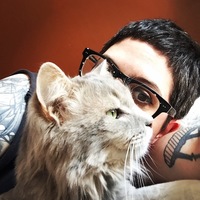 Roan Parrish lives in Philadelphia, where she is gradually attempting to write love stories in every genre.


When not writing, she can usually be found cutting her friends’ hair, meandering through whatever city she’s in while listening to torch songs and melodic death metal, or cooking overly elaborate meals. She loves bonfires, winter beaches, minor chord harmonies, and self-tattooing. One time she may or may not have baked a six-layer chocolate cake and then thrown it out the window in a fit of pique.