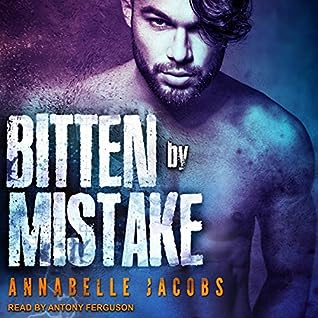 
From animosity to searing passion in a lunar cycle… but can their bond survive?

“Bitten by Mistake” tended to run a bit hot and cold for me. There were things that I enjoyed about it and there were moments that gave me a slight disconnect from the story, but by the end of it all I was far more intrigued than anything else.
Some of the things that worked well for me were the tension and the banter between the MCs. These two men challenged each other at every turn and regardless of the fact that Nathan was a shifter, Jared refused to be intimidated by him and called him on his BS every time.

I liked the shifter world that the author created bringing shifters into the world of humans rather than keeping them some deep, dark secret. But still giving them their own social structure that’s very obviously changing and evolving as both shifters and humans try to co-exist.

The whole premise of why and how Nathan and Jared came to end up being together holds strong potential for an interesting series and I have to admit I’m curious to see how things play out with the different shifter packs and the impact that this holds for relationships between not just the different packs but between shifters and humans as well.

There were also several secondary characters whom I’m hoping the author will give us stories for in this series as well as a few…thankfully most of whom weren’t a part of Nathan’s pack…that I kind of hope will just disappear into the ether.

Nathan often seemed to be so full of himself and confident to the point of conceited and just generally self-absorbed. Yet surprisingly, he often put Jared’s needs and well being first…not always in a directly obvious way but still at some point it would become apparent that his primary concern was Jared even when Nathan wasn’t fully cognisant of his actions being guided by this choice. At some point I began to see Nathan’s vanity as being more indicative of ‘what he was’ a shifter…rather than…who he was as an individual.

While Jared supposedly didn’t like shifters, he’d had a bad relationship in the past so therefore all shifters were arrogant, abusive a**holes in his mind…sorry, but in the words of an old song by The Osmonds….”One bad apple don’t spoil the whole bunch, girl” I think maybe I would have warmed up to Jared more if he’d presented more of a ‘once bitten, twice shy’ attitude so I’m going to own this one as being a purely subjective opinion, ok?

This was only my second book by Annabelle Jacobs and while I definitely enjoy that first book more allowing for the fact that in general shifter stories tend to be a bit of a harder sell with me. I’d have to say that all in all this one went fairly well add in the fact that Antony Ferguson is a new to me narrator who quite honestly nailed this one with his narration and offered up character voices that were very much in sync with the images that I envisioned.

“Bitten by Mistake” presented not only an interesting take on the world of shifters but it was also an entertaining use of the enemies to lovers and pretend boyfriend tropes as well and I’m definitely looking forward to enjoying this series on audio with he hopes that Mr. Ferguson will be providing the narration.