ARC Review: Not Used To Cute by Becca Seymour 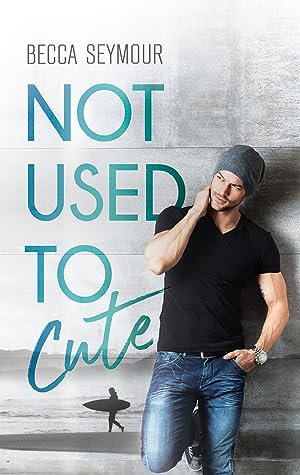 A bar owner who’s not looking for a relationship. A lost soul who’s afraid to trust. When Elijah and Seb meet, sparks fly. But will either of them find the courage to take what they want?
Pouring his all into his business, Elijah is perfectly content running his bar. With its prime location and its infamous drag shows, Bar QK is the place to be. Elijah is used to meeting new and sometimes interesting people, but it’s rare anyone catches his interest for anything longer than a five-minute conversation.
It takes a wandering, unfiltered surfer, who’s tired of the chase and dog-tired of people taking advantage of him, to spark long-buried interest in Elijah.
While kindness runs through his veins, Seb doesn’t believe in fairy tales. He has a past he’d rather forget and has no real expectations for his future. He believes it’s safer to not make assumptions about anything or anyone; that way, he’ll remain safe.
It takes his elusive, aloof boss, whose mixed messages are more confusing than Ikea furniture instructions, to show Seb that opening his heart can be worth the risk.
When Elijah and Seb find themselves working on a common goal, the high stakes may be just the nudge they need.

This is a really sweet, feel-good, sexy romance, set in a town in coastal Australia, between the owner of a gay bar and his adorable new employee, both of whom have had some bad relationship experiences in the past and are therefore guarding their hearts.

Elijah, the bar owner, is content in running the small but successful place and keeping it welcoming and accepting to all. The bar is locally famous for its fabulous drag shows and well frequented.

Seb has not been treated well by people in the past, having been taking advantage of many times. He hides the inner scars with a flirty attitude, but shies away from letting anyone come close.

The romance is by design a slow burn, complicated by homophobic attacks on the bar and its employees, but both Elijah and Seb are intrigued by each other pretty much from the start. Elijah doesn't want any advance he makes to further the relationship to be a one-time thing, so for quite some time he's sending mixed messages to Seb. He's trying to not fall back into his player ways, so to speak, and while the attraction is formidable, he worries that he won't be able to commit. So they get close, and then Elijah retreats, leaving Seb bewildered.

The mystery of who is behind the homophobic attacks also hinders the relationship development, as Elijah has to devote a good amount of his time to ensuring his bar and staff are safe.

I really enjoyed reading this book. Seb's word vomit is adorkable, and he's despite his bad experiences a kind and compassionate man, wholly deserving of all the good things that are in his future. Elijah comes across as strong in some aspects and vulnerable in others, especially around making himself vulnerable by opening himself up to a long-term commitment.

The writing is vivid but not purple, and the author managed to bring a lot of genuine emotions across. The characters felt organic and believable, with multi-faceted personalities, and even the villain wasn't one-dimensional as they so often are in romances. The supporting cast was well done as well and rounded out the plot nicely.

This was my first book by this author. I'm definitely going to check out what else is available in this author's catalog.