Please welcome Brandon Witt with the re-release of

Happily ever after has no map, but sometimes fate sends a guiding light 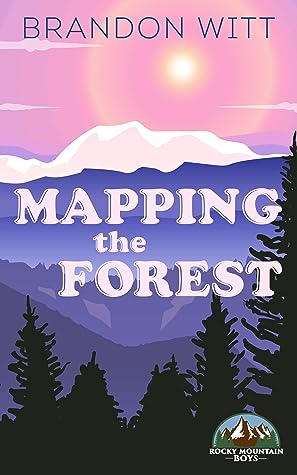 Gabe Rice, a seasonal ranger at the Rocky Mountain National Park, can’t seem to get his life on the right trail. He loves the rugged beauty of the land, and there is no place he would rather live than the mountain community of Estes Park. But after six years, Gabe is beginning to wonder if he’ll ever get a full-time position or find love. When Gabe sees Luis—and hears his gorgeous singing—he’s compelled to meet him.Luis Martinez, the new owner of a hotel and steak ride business in Estes, left California and a career as a therapist for a fresh start in Colorado. But even the beauty of the mountains can’t help him forget the past or move forward. Unprepared for his strong attraction to Gabe, Luis is ready to run and hide from emotions he never thought he’d have again.
Suddenly the path ahead opens to a future that looks brighter for both of them, if they can find the courage to walk forward—together.

The food shipment had been short nearly fifteen potatoes, which, of course, no one had noticed until nearly time for Luis to start up the mountain ahead of the jeeps to get the food prep underway.
Just what he needed to do—fight the tourist traffic at Safeway, making him late with the food, which meant a later start to the singing and later getting back down the mountain and into bed. Though maybe that was a good thing. If he was tired enough, surely he wouldn’t be tempted to reinstall Scruff and stare at MountainScout’s picture again.
Yes. That would be a very, very good thing.
He was nearly done filling his basket with potatoes, trying to focus on counting them instead of eavesdropping on a couple of tourists debating the best fruit to tempt an elk into eating out of their hands, when a voice beside him nearly caused him to drop the basket.
“Trying to carb overload?”
Luis looked over and flinched. “Oh. It’s you. Mountain—” Dear God, he’d almost said the man’s Scruff handle name.
MountainScout cocked his head. “I’m sorry, what?”
“Oh, ah….” Luis picked up a potato from the basket and placed it back on the produce pile. “Uh, it’s you. From the mountain. With the kid. You saved the kid that night. On the… mountain.” Somebody shoot him.
The man smiled. And, of course, he had perfect large white teeth. To go with his perfect large, muscled body.
To his horror, Luis felt his cock stir, and he lowered the basket below his waist and dug for another potato.
The man didn’t seem to notice. “Nah, I didn’t save him. He was just lost. He would have been found by someone else if I hadn’t been there.”
Luis just nodded, not having any clue what to say. Or how to speak, for that matter.
MountainScout motioned to Luis’s basket. “You’ve got too many potatoes or something?”
“What?” Luis pulled the basket closer, just in case.
“The potatoes, you’ve put three of them back already. I wasn’t really trying to judge your carb intake. I mean, I love me a potato.” He patted his flat stomach.
Luis glanced down into the basket. Sure enough, he had fewer spuds now. What the hell was wrong with him?


Like he didn’t know.
“Oh, yeah. Potatoes. I ah… need those. We’re short some potatoes on the steak ride tonight.”
“Well, you do cook a mean baked potato.”
Luis was trying to figure out if the man was serious when the blond held out his hand. “I’m Gabe, by the way. I don’t know if we officially met the other night.”
Luis fumbled with the basket, making sure to keep it properly situated as he stretched out his hand to meet the shake. “Luis. Nice to meet you.”
“Luis, yeah, I remember.” There was that look in MountainScout’s eyes again. The same that had been there the other night. The look in Gabe’s eyes. Gabe’s blue eyes.
“Well, I guess I should get going.” Luis began shoveling potatoes back into the basket, not bothering to count. “It doesn’t set a good example when the boss man is late.”
Gabe’s eyes widened. “Oh. You own the steak ride.”
“Yeah.” Luis pushed up his glasses in a nervous manner.
“That’s cool. I thought you were just the cook and did the entertainment.”
Luis cooled slightly. “No, I own the thing and the lodge that goes along with it. For better or worse. Most people here seem to think a Hispanic man is just the help. Always surprises everyone when they ask to speak to the boss and here I come.”
Gabe’s cheeks flushed, somehow making him even more attractive. “Oh fuck. No. I didn’t mean it like that all. Really. I guess I just didn’t think the owner would be sweating away over a grill.”
He was sincere, that was obvious, as was his embarrassment. Didn’t that make Luis feel like the biggest ass in the world, and once again leaving him without any words to say.
“You have a beautiful voice. I could have listened to you sing all night.”
Then it was Luis’s turn to blush. “Thanks. That’s kind to say.” He cleared his throat. “Listen, I’m sorry about—”
Gabe swiped his hand through the air. “Hey, don’t mention it. Working here, with all the tourists and small-town folks, we all get a bit used to deflecting their preconceived notions. I’m pretty careful to not let a car full of people from Arkansas know that their park ranger tour guide is a big homo, you know?”
Luis cleared his throat again, wanting desperately to escape. “Yeah, that could be a problem.”
Seeming to pick up on Luis’s tension, Gabe took a step back, making some room. “Well, hey, I don’t wanna keep you. I know you said that you were running late. Just wanted to say hi. Maybe we’ll bump into each other again sometime.”
“Yeah, maybe.” Luis managed a nod and grabbed another potato before turning around. He made it about four feet before Gabe called after him.
“Actually, Luis?”
Wow, didn’t his name sound great coming from Gabe. He turned. “Yeah?”
Gabe’s cheeks were bright red over his beard again. “I, ah. Well, maybe let’s not wait until we bump into each other again. Could I take you to dinner sometime or something?”
Luis just gaped at him. Stunned. Hope and guilt coursing through his body in equal measure. Without consciously choosing to, he shook his head.
“Oh.” Gabe’s face fell. “Sorry. I guess I just assumed. Must have read it wrong. No offense meant.” Without waiting another moment, Gabe turned and walked away through the bins of vegetables and fruit.
Luis almost called out. Told Gabe to stop. Yelled that he most definitely wanted dinner. Wanted to feel that beard scratch against his own. See if Gabe’s chest hair was really that reddish-gold color in person. Stare into his beautiful blue eyes.