We're delighted to announce the re-release of 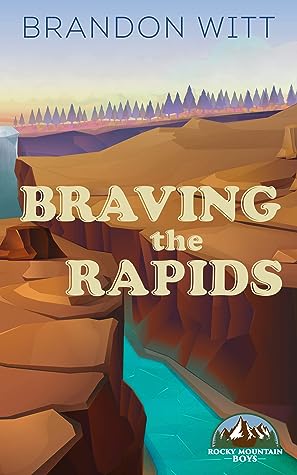 Estes Park native Todd Fleece works hard to honor his obligations to family and the businesses he inherited, but only his friends and the horses at his ranch brighten Todd’s life. In fighting his attraction to his best friend’s ex-boyfriend, Todd has focused solely on his work, leaving little room in his life for finding love.

Matt Abel’s reckless youth put him on a path to a self-destructive life—his most painful failure was being a horrible father. He excels at extreme sports and living on the edge. Now back in Estes Park and teaching white-water rafting, Matt tries to reconnect with his mother and his grown daughter. When he runs into his ex’s friend Todd, Matt longs for more than a fling.

But achieving happiness isn’t simple, not with Todd’s family conflicts and Matt struggling not to slide back into alcoholism. With hurdles threatening to drive them apart, Todd and Matt try to find the courage to brave the rapids and face a future together….

By the time we were finished at Hooves and Trails Ranch, we were both dripping sweat, and I was fairly certain the shirt I’d worn was ruined. I should’ve ignored my vanity and chosen a shirt I didn’t care about, but this one fit so perfectly on my chest and shoulders. With all the moving I’d known we were going to do….
After the last piece of junk had been loaded into the dumpsters, I locked them up to keep the bears from rummaging, as they liked to do. Suddenly another thought hit me. It had only filled up one of the dumpsters; I should’ve taken Matt to my house and used the dumpster there. Then I could suggest cleaning up real quick. I’d seen Matt’s mattress; my bed would serve our purposes much better. Too little, too late, though. I had no idea how to suggest that now without being completely blunt. So I didn’t.
We were only back in the truck for a couple of minutes before Matt broke the silence again. “I really appreciate all your help tonight. Seriously. How about I buy you dinner as payment? You gotta be hungry after all that.”
I was. Starving. And dinner with Matt…. “Yeah. That sounds great. How about we go to—” A horrid thought hit me. “Uhm. Actually. Maybe we could order a pizza to your place or something.”
Confusion flitted over Matt’s face, but only for a moment, and then it cleared. “I guess it wouldn’t do for anyone to see us together out to dinner, huh?”
Yep. He’d read my mind perfectly. “No. It’s not that. I’m just dirty and—”


“It’s okay, Todd. I wasn’t thinking when I suggested it.”
I turned back to the road. Shame flooded through me again. This time, though, due to the hurt I heard in Matt’s voice. Unless I was making it up.
“I’m sorry, Matt. It’s not that I’m ashamed of—”
“I know. Really. I should’ve thought before I suggested it.” The brightness of his tone seemed forced. “Just take me back to my place, if you don’t mind. I really do appreciate all your help.”
Silence returned in the few minutes it took to drive back to Matt’s little cabin. I really had fucked the whole night up. Now nothing would happen, and I’d still feel guilty about it.
Perfect.
I pulled up to Matt’s house and put the truck in Park. Matt turned to look at me. “Thanks again. It was really nice of you.”
“Of course. I’m glad I could help. That would’ve sucked having to do that all on your own.”
He nodded, hesitated, then opened the passenger door and stepped out of the truck. He started to shut the door, but paused, turning back. There was a new heat in his eyes as he looked at me. “I know I probably shouldn’t ask, but… do you wanna come in?”
I’d been preparing for that question all night. Literally and figuratively. On the drive back, though, I’d given up even the slightest hope of it, and then to have it out there when I least expected, caused my brain to freeze.
“Oh.” Matt’s face fell. “Guess I misread… I just thought… sorry.” He shut the door quickly and started to walk away.
I watched for a split second, killed the engine, then nearly threw myself out of the truck, stumbling as I did so. Somehow I managed not to fall, and hurried toward him.
He turned to look at me in all my commotion.
“Yes.” I faltered toward him, coming to a stop a few feet away. “Yes, Matt. I want to come in.”
A smile broke across his bearded face. He was always handsome in a rugged yet carefree boyish way, but when he smiled? Especially like that, it turned out he was gorgeous. I’d never seen him smile like that before. “Yeah?”
Guilt bit one more time, riffling the faces of each of my loved ones through my mind, and I shoved every single one of them away in a weird fury. I stepped closer and paused with mere inches between us. “Yeah. Take me inside.”
I could feel the warmth of his breath on my face as he looked down at me. I was nearly six feet tall, but Matt was taller. For a moment I thought he was going to kiss me. He didn’t. He stared into my eyes a second longer, then turned. “Well, get in here, then.”
I followed him inside the cabin, and he was on me before I’d even managed to shut the door. With no caress or tenderness, he grabbed my belt and began unfastening it.


It took me off guard, just long enough for him to get it fully unlatched, but by the time he started at the button of my jeans, I’d caught up and hopped on the ride full force. I pulled my shirt over my head and dropped it to the floor, then started to pull at the button of his jeans.