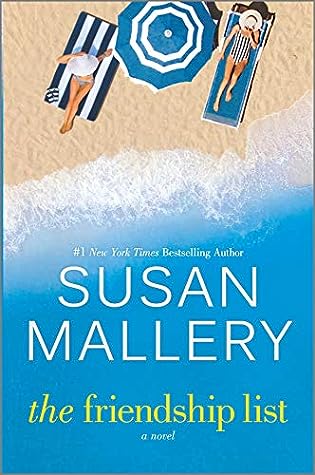 Ellen and Unity have been best friends basically since birth, but they couldn’t be more different. Unity married her childhood sweetheart just after high school and became an Army wife, moving from base to base…until her husband's shocking death in the line of duty leaves her a widow. Grief-stricken, it’s time for Unity to come back home to Ellen—the only person she can trust to help her rebuild her life. But Ellen has troubles of her own. Boys never seemed to notice Ellen…until one got her pregnant in high school and disappeared. Her son is now 17 and she’s wondering what to do with herself now that he’s heading off to college and he's literally her entire world.

But now that Ellen and Unity are reunited, they’re done with their stale lives. It’s time to shake things up and start living again, knowing that they'll always have one another to lean on. So they create a list of challenges they have to accomplish--everything from getting a tattoo to skydiving to staying out all night. And whoever completes the most challenges is the winner. But with new adventures and love just around the corner, there’s no such thing as losing…


“I should have married money,” Ellen Fox said glumly. “That would have solved all my problems.”


Unity Leandre, her best friend, practically since birth, raised her eyebrows. “Because that was an option so many times and you kept saying no?”


“It could have been. Maybe. If I’d ever, you know, met a rich guy I liked and wanted to marry.”


“Wouldn’t having him want to marry you be an equally important part of the equation?”


Unity picked up her coffee and smiled. “True, but I did give you my pony rides when we celebrated our eighth birthdays.”


A point she would have to concede, Ellen thought. With their birthdays so close together, they’d often had shared parties. The summer they’d turned eight, Unity’s mom had arranged for pony rides at a nearby farm. Unity had enjoyed herself, but Ellen had fallen in love with scruffy Mr. Peepers, the crabby old pony who carried them around the paddock. At Ellen’s declaration of affection for the pony, Unity had handed over the rest of her ride tickets, content to watch Ellen on Mr. Peepers’s wide back.


“You were wonderful about the pony rides,” Ellen said earnestly, “And I love that you were so generous. But right now I really need a small fortune. Nothing overwhelming. Just a tasteful million or so. In return, I’ll give back the rides on Mr. Peepers.”


Unity reached across the kitchen table and touched Ellen’s arm. “He really wants to go to UCLA?”

Ellen nodded, afraid if she spoke, she would whimper. After sucking in a breath, she managed to say, “He does. Even with a partial scholarship, the price is going to kill me.” She braced herself for the ugly reality. “Out-of-state costs, including room and board, are about sixty-four thousand dollars.” Ellen felt her heart skip a beat and not out of excitement. “A year. A year! I don’t even bring home that much after taxes. Who has that kind of money? It might as well be a million dollars.”


“I don’t have a lot of options.” Ellen pressed her hand to her chest and told herself she wasn’t having a heart attack. “You know I’d do anything for Coop and I’ll figure this out, but those numbers are terrifying. I have to start buying lottery scratchers and get a second job.” She looked at Unity. “How much do you think they make at Starbucks? I could work nights.”


Unity, five inches taller, with long straight blond hair, grabbed her hands. “Last month it was University of Oklahoma and the month before that, he wanted to go to Notre Dame. Cooper has changed his mind a dozen times. Wait until you go look at colleges this summer and he figures out what he really wants, then see who offers the best financial aid before you panic.” Her mouth curved up in a smile. “No offense, Ellen, but I’ve tasted your coffee. You shouldn’t be working anywhere near a Starbucks.”


“Very funny.” Ellen squeezed her hands. “You’re right. He’s barely seventeen. He won’t be a senior until September. I have time. And I’m saving money every month.”


It was how she’d been raised, she thought. To be practical, to take responsibility. If only her parents had thought to mention marrying for money.


“After our road trip, he may decide he wants to go to the University of Washington after all, and that would solve all my problems.”


Not just the money ones, but the loneliness ones, she thought wistfully. Because after eighteen years of them being a team, her nearly grown-up baby boy was going to leave her.


They smiled at each other.


Unity stood, all five feet ten of her, and stretched. “I have to get going. You have young minds to mold and I have a backed-up kitchen sink to deal with, followed by a gate repair and something with a vacuum. The message wasn’t clear.” She looked at Ellen. “You going to be okay?”


Ellen nodded. “I’m fine. You’re right. Coop will change his mind fifteen more times. I’ll wait until it’s a sure thing, then have my breakdown.”


They walked to the front door. Ellen’s mind slid back to the ridiculous cost of college.


“Any of those old people you help have money?” she asked. “For the right price, I could be a trophy wife.”


Unity shook her head. “You’re thirty-four. The average resident of Silver Pines is in his seventies.”


“Marrying money would still solve all my problems.”


Unity hugged her, hanging on tight for an extra second. “You’re a freak.”


“That will never happen.”


Ellen smiled. “Have a good one. Avoid spiders.”

SUSAN MALLERY is the #1 New York Times bestselling author of novels about the relationships that define women's lives—family, friendship and romance. Library Journal says, “Mallery is the master of blending emotionally believable characters in realistic situations," and readers seem to agree—forty million copies of her books have been sold worldwide. Her warm, humorous stories make the world a happier place to live.


Susan grew up in California and now lives in Seattle with her husband. She's passionate about animal welfare, especially that of the two Ragdoll cats and adorable poodle who think of her as Mom.