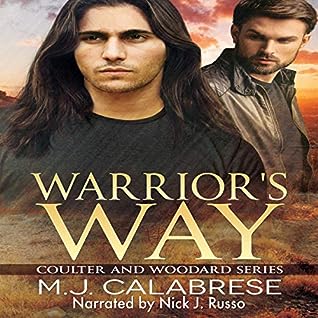 Hello, tall, dark and handsome.’ Out and proud gay Albuquerque Homicide Detective Eagle Woodard studied Dr. Adam Coulter, criminal profiler, with a clinical eye. ‘Slender build…narrow waist, but nicely muscled underneath that Hugo Boss suit. People think you work out, Kemo, but you don’t.’ Eagle’s dark eyes narrowed. ‘You know I hate that day old beard look, but you were probably too wasted to bother. Nice eyes, green when they aren’t blood shot. Flawless tanned skin except for that tiny scar through your left eyebrow.’ The former Army Ranger grinned. ‘I gave that to you accidentally when we were 8 years old. When you stood up for this Navajo kid in an all white school. We both got our asses kicked.’ Eagle sighed and shook his head. That was the day he’d fallen in love with 4 times married, 4 times divorced, current roommate, Adam Coulter.

Eagle and Adam are faced with their toughest challenge yet. They must find an active serial killer before he strikes again. With the powers that be not cooperating and the killer proving to be elusive, will Eagle and Adam be able to stop the murderer while navigating their changing relationship?

Let's take stock of the highlights...
on this one before wrestling any of the minutiae...

...if you're not a fan of partners having sex with other people even if they're not actually in a relationship yet...you might want to take a pass on this one as well.

...if your tolerance for graphic violence isn't high...again maybe take a pass on this one.

...if you're looking for a happily ever after...then I'm pretty sure this one is not going to work for you.

However...if you're like me and those things aren't on your hard pass list and you can allow that maybe like real life this is a story that gets a bit messy when it comes to the personal relationship issues then you might want to at least check this one out.

I admit there were some definite niggles for me throughout this one but I was also intrigued by the relationship between these two men and for me the intrigue trumped the niggles so carry on with the story I did.

Criminal Profiler, Dr. Adam Coulter's going 4 for 4 in the marriage/divorce department and his life long best friend and roommate Homicide Detective Eagle Woodard has never been married but that might be because the one person he's in love with is trying to convince the world and himself that he's not gay (yes, we're talking about Dr. Coulter).

It's not until Eagle and Adam get dragged into the hunt for a serial killer by FBI agent Rick Kessler and lordie, don't let me get started on this pompous, jerk because we'll be here all night...me typing and you reading. But sadly he is an integral part of the story, so I just let him be that person that I loved to hate.

Overall for me there were two things that became stumbling blocks and one of them related to what seemed to be the nicknames that these men had for each other...specifically Tonto and Kemosabe. Don't get me wrong it had nothing to do with how politically correct these names were or weren't but more with the total predictability of them and the fact that in a way it was almost like they were being used as reminders that one of these men was Native Indian and the other was a white man which to me seemed less significant than maybe reinforcing the bond of friendship that was between them...which leads to my next issue...

Which was in regards to the fact that Adam and Eagle were suppose to be best friends, had been best friends since childhood and had also worked together on several cases but somehow it felt like the bond of trust that was between them and to me should have been really strong...wasn't. To say the least it turned out to be incredibly fragile and easily broken.

So where did all this leave me...well, it left me with a very unresolved ending and a huge case of curiosity as to how in the name of all that's sacred between friends the author is going to fix this and not only fix things but fix it to the point where I as the reader believe that these two can work as a couple...because truth be told at this point...I'm not seeing it.

What did I like...interestingly enough some of what I didn't like was also what I liked or more accurately what interested me about the story. I like seeing an author take what to me seems like an impossible to fix situation and fix it. Sure sometimes it works and other times...not so much. But it's still intriguing to see. Believe it or not while I didn't like Rick Kessler, I like seeing characters like him in a story...not every story but occasionally someone as insufferably arrogant as him adds to a story line and in this case he did...sort of. But he also crossed a line in his single mindedness to ensure that solving this case moved him towards achieving his personal goals at any cost. Yeah, I admit it...I totally want to be there to see him get his just desserts because he so needs to come down a notch or six...needless to say I'm wishing and hoping that it happens and happens soon.

Last but definitely not least in the list of what worked for me was the narrator. Nick J. Russo has been one of my favorite narrators since I first listened to him back in 2016. Regardless of how much I have or haven't enjoyed the story and there have been a few that maybe weren't great stories this is one narrator who without fail gets me through to the very end.

"Warrior's Way" is definitely a mixed bag when it comes to the reviews but for me what worked definitely outweighed what didn't work so I'm going to keep my fingers crossed that the audio book for "Mountainway Chant" the second book in this series isn't to far behind this one.

An audio book of "Warrior's Way" was graciously provided by the author in exchange for an honest review.

Email ThisBlogThis!Share to TwitterShare to FacebookShare to Pinterest
Labels: 3 stars, audio book review, crime/drama, favorite narrator, first in series, new to me author, no HEA/HFN - yet, not a romance, pain and loss, self-published, some steam & sex