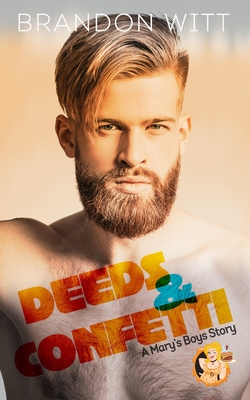 Steven Conley loves owning his own Hamburger Mary's restaurant in Denver, Colorado, and his chosen family of coworkers makes life even better. Steven never regretted leaving the corporate grind behind until his father's harsh deathbed words leaves him doubting himself.

Ryan Fuller abandoned a lucrative career to start his own party-planning business, but he keeps afloat by coordinating funerals. When Ryan bumps into Steven-his best friend's uncle and the man Ryan has secretly crushed on forever-the attraction explodes into a night of passionate abandon for both men.

Steven is blown away by the care and deep connection he feels for the hot young funeral director-until Ryan admits who he really is. Reeling from the recent upheaval in his life, Steven must decide whether to give Ryan a chance. To find love, they must risk it all...

Ryan followed Steven’s truck. They didn’t speak as they each got out of their cars and walked to the front door of Steven’s apartment.
They made it into the elevator. Steven suddenly wished they’d met a few years ago. Back when he had money, when he had a beautiful Cherry Creek house. All that was gone into mortgages, deeds, and remodels. He was bringing this beautiful man to his dated apartment he hadn’t even bothered to decorate. At least it was clean.
Steven hit the button for the eighth floor, then glanced over at Ryan. He seemed nervous. Maybe scared, even. Shit.
The elevator doors separated, and Steven put his hand out, holding them open.
Ryan hesitated.
“If you’ve changed your mind, it’s okay.” Steven sounded like he meant it, which was a surprise. He didn’t. He hadn’t been remotely close to tears all day, not for a second. But if Ryan went back down the elevator, Steven knew with certainty he’d lock himself in his apartment and break.
There was that smile again, nervous and beautiful. “No, I’ve not changed my mind. I’m just kind of blown away you want to be with me again, to be honest.”
An explosion of a laugh burst from Steven, a mix of disbelief and nerves. Then he noticed Ryan’s change of expression. “Oh, you’re serious.”
Ryan didn’t answer for a few seconds, then gave a slight nod, as if making a decision. “Come on.” He stepped off the elevator, and Steven followed.
Steven led the way to his apartment, unlocked it and opened the door, then let Ryan walk through first. “Sorry, I’ve been so busy with the restaurant for the past while, I’ve not decorated my apartment. It’s kinda sparse.”


When he relocked the door and turned around, whatever nerves Ryan had been feeling had vanished. “I’m not worried about your apartment.” Taking notes from Steven’s playbook from the other night, Ryan stepped forward, invading Steven’s space, pushed him against the door with the weight of his muscled body, and kissed him.
It caught Steven so off guard he’d kept his eyes open for a moment, shocked to feel the force in Ryan’s kiss. When long fingers sank into his beard, Steven closed his eyes and let out a long sigh. For several moments his arms hung at his side as he was completely captured by Ryan’s kiss, the tenderness of his lips and the gentleness of his fingers as they traced his face.
Of the passion he felt flowing from Ryan.
He’d never had a kiss like it. At least not this soon. Maybe after a few dates or weeks of flirting and playing cat and mouse. Never like this. Not when he’d just learned a man’s name. There was desire there, no doubt, but there was more. Like Ryan actually cared about him.
At last Ryan pulled away a few inches, his light brown eyes staring directly into Steven. Into his soul. Stupid or not, that’s how it felt. Like Ryan was assessing all parts of him and, unbelievably, liked what he saw.
“I want to have you inside of me.” As in the other brief moments with Ryan, Steven seemed to lose his filter or willpower. “Will you make love to me?” The words were out of his mouth before he’d considered them. The meaning sinking into him as they caused Ryan to flinch. Steven rushed on, before the moment was ruined. “Fuck me, I mean. Please, fuck me.”
Ryan only nodded.
He hadn’t ruined it. Thank God. He hadn’t meant to say that. Why the hell—
He cut off that train of thought. No reason to go there. “Uhm, let me take a shower really quick. It’s been a… long day.”


Ryan nodded again. Steven started to move away, but Ryan spoke, sounding unsure. “Actually, it’s been a long day for me too. May I join you?”