Thom Novak feels like a walking cliché: the gay guy desperately in love with his straight best friend, Lee. But he’s willing to keep his feelings hidden, to do whatever it takes, as long as they stay friends forever.

Lee Conway loves sharing an apartment with Thom, his best friend since birth, and would be happy doing it for the rest of his life…no matter his current girlfriend’s opinion on the matter. But he’s never been known for being in contact with his emotions.

When something happens to upset the status quo, Lee pulls away. Has Lee learned how Thom feels about him? Will it mean the end of their friendship? Or is there another reason Lee needs time to think? A more…hopeful reason?

The next morning, I’m one hundred and ten percent certain something’s wrong. It’s 6:17 AM and I’m waiting for Lee in the kitchen, leaning against the sink, trying to make my glass of water last so I have an excuse for hanging around, doing nothing but staring in the direction of his bedroom.

Every morning, we go out running together at 6 AM on the dot. Without fail, come rain or shine, weekend or workday. The only exception is if either of us is sick or if it’s a world-ending kind of storm outside. And Lee is a stickler for being on time: between him and me, I’m the one who’s always late and leave him waiting impatiently for me to get ready.

And now it’s almost twenty past six and he hasn’t showed his face yet?

Outside, it’s a lovely May morning. The birds are chirping, waking up the neighborhood, and the first rays of sun promise to finally heat up our corner of the world. So no world-ending storm in sight, and yet he’s nowhere to be seen.


Any other day, I would march into his room, pull off his down comforter, and yell in my best—albeit not very good—imitation of a drill sergeant—Get up, get up, get up!—but today I’m strangely reluctant.

On one hand, I want an explanation for his weird mood from yesterday—and his tardiness!—but on the other hand I still want to give him time if he needs it. And part of me isn’t entirely sure I’m not over-reacting.

But I can’t help thinking that it has to be something about me. What if he found out how I really feel about him and can’t deal with it? Not that I can recall doing something to show my hand, but I can’t be sure.

Maybe it’s something Debora said? Did she figure me out and tell him? She’s never shown any homophobic tendencies, so I don’t think that would be the reason. But maybe she’s jealous? She wouldn’t be the first of Lee’s girlfriends to be jealous of our close friendship, and I can’t really blame her if that’s the case.

But that can’t be it either. Every time someone has complained about our friendship in the past, Lee’s shut them down immediately. He wouldn’t accept it from her. And to be perfectly honest, Debora has always been friendly and nice whenever we’ve met and not shown any indication of being jealous.

And I’m back to thinking he must have figured out how I feel about him, even though it seems highly unlikely. I mean, I haven’t told him specifically—or written my feelings down on a sign—but whatever it is, I hope it won’t come between us.

In the end, I decide to give him time, and live with his ire if it turns out he overslept—yeah, right!—and I neglected to wake him. I shove my feet into my shoes and head out on my own.

Running alone is weird. Lee is the whole reason I’m a runner at all; when he decided he wanted to become a professional football player when he was ten, he told me he needed to start taking his “fitness routine” seriously and he was going to start running every morning. When I made a disgusted face over the thought of getting out of bed in the buttcrack of dawn to go out and run of all things—wake me up and take me to the library and I would have been game, but running?—he zeroed in on me and started lecturing me on how even science geeks needed to stay healthy. He went on and on—and quoted me honest-to-god, real, actual facts!—until I broke down and agreed to come along. I’ve never been one to resist science. Or Lee. And the combination was deadly even when I was ten.

Nell Iris is a romantic at heart who believes everyone deserves a happy ending. She’s a bona fide bookworm (learned to read long before she started school), wouldn’t dream of going anywhere without something to read (not even the ladies room), loves music (and singing along at the top of her voice but she’s no Celine Dion), and is a real Star Trek nerd (Make it so). She loves words, bullet journals, poetry, wine, coffee-flavored kisses, and fika (a Swedish cultural thing involving coffee and pastry!)

Nell is a bisexual Swedish woman married to the love of her life, a proud mama of a grown daughter, and is approaching 50 faster than she’d like. She lives in the south of Sweden where she spends her days thinking up stories about people falling in love. After dreaming about being a writer for most of her life, she finally was in a place where she could pursue her dream and released her first book in 2017. 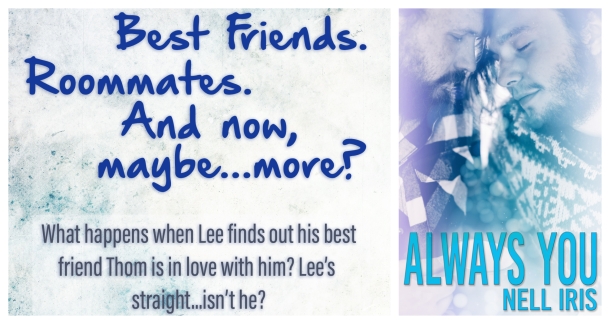 Enter the Rafflecopter Giveaway for a chance to win

one of five copies of your ebook choice from Nell's backlist