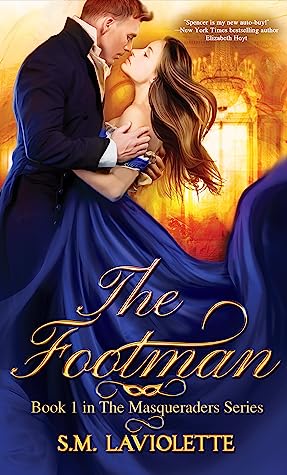 Lady Elinor wants nothing to do with love. Her arranged marriage—and one glorious but ill-fated kiss with a handsome footman—cured her of any romantic notions she’d ever entertained. Now a widow, all Elinor plans to do is rebuild her life—without a man in it. She certainly has no intention of falling for the charming and entirely too tempting American who seems so determined to win her favor …

Stephen Worth is no longer the impoverished footman who lost everything because of the impulsive actions of a reckless young lady. Having reinvented himself long ago, his sole focus now is revenge. He’ll do whatever it takes to extract a pound of flesh from all who wronged him so long ago. And if that means ruining the lovely Elinor in the process? So be it.

But it’s not long before Elinor finds herself drawn to Stephen despite her best intentions—and before Stephen starts to wonder if maybe a life with Elinor is worth more than his revenge. Can Stephen and Elinor overcome their painful pasts and take a second chance on love? Or is the cost of trust simply more than they’re willing to pay?

I'm a huge, huge Minerva Spencer/S.M. LaViolette fan, and I read everything she writes. She delivered another riveting romance with The Footman that was nearly impossible to put down.

The Footman doesn't pull any punches. If you don't like your main character doing some very morally questionable behavior and having to redeem himself with chapters of intense grovelling, then this book might not be for you. I happen to like those scenes where a character royally screws up and then has to beg for forgiveness. Bring on the grovel-porn! The male main character was relentless in his quest for revenge, and I found it all to be an intensely compelling read.

I loved the female MC, though it was painful to read what she had gone through in her life. I admired her so much, and I lauded her desire to be a physician and help others, despite her physical limitations. She was so interesting and so strong.

Though this book reached 350 pages, it absolutely flew by. I couldn't stop reading, and I would have read all night to finish it. It takes a very skilled author to craft a long book that is also well-paced. Though the plot edged on too-complicated at times, it still reined it in enough to be a cohesive and thoroughly satisfying read.

My only qualm is that I still felt a bit suspicious of Stephen, even at the end. He screwed up so epically that I still questioned his moral compass. However, I thought the romance was lovely and, I'll admit, I'm a sucker for a red-headed MC. I'm weak! But he really has a lifetime of begging ahead of him...

A must-read for fans of S.M. LaViolette, I can't wait to read more in this series.