Re-release Spotlight: The Imperfection Of Swans by Brandon Witt

The Imperfections Of Swans 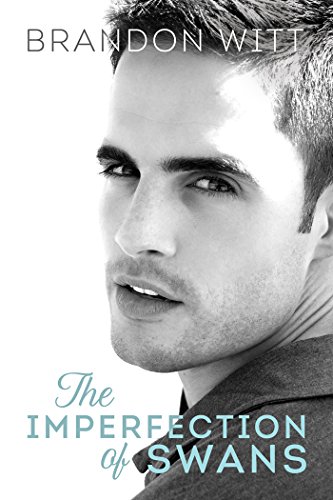 Kevin Bivanti's dream to open a wedding dress shop—a place with stunning gowns to make every bride-to-be feel adored—is on the verge of becoming a reality. When he quits a successful advertising career to buy an old brownstone in a trendy Boston neighborhood, fate intervenes, ushering in Casper James, who hopes to open his own bakery. With Casper willing to take the risk, their ambitions meld into a wedding dress and wedding cake boutique.But extensive renovations to the brownstone, an affair with his ex-husband, family drama with his mothers, and the anxiety of significant life changes push Kevin to the brink of a nervous breakdown. And as Casper becomes more than a business partner, the attraction adds another layer of intensity for an already struggling Kevin.
With the stress of a new business venture and the resurgence of Kevin’s personal demons, Kevin and Casper must find the courage to pursue hope in the of face life’s uncertainties and imperfections.

Ecstasy. Watching the wedding-gown-clad models sashay down the runway was ecstasy. It was as perfectly wonderful as Kevin thought it would be. With each new dress that passed by, new ideas and inspirations flooded him. He was suddenly glad things had gone slower than expected at Bella Dolce. They were still in a place where they could make changes easily.
Maybe having a runway down the middle of the store with a model showing the dresses would be amazing. He’d definitely not seen that in any other shop he’d been in. And there really was nothing like seeing how the dresses moved. However, he’d have to figure out how to achieve that while still keeping with the intimate and elegant ambiance he was going for.
With every pass of the gowns, Kevin’s heart rate increased, but out of pure excitement. While the stress was there, it was smothered by the wonder of it all. Planning ahead, he’d put two Xanax in his pocket that morning, more than recommended, but he figured this would be the day for them. And if there was ever a day he could not afford to have an anxiety attack, it was here, in front of designers and other wedding shop owners. The day was nearly half over, and he still had the forgotten Xanax in his pocket. His Aciphex was a different story entirely. The acid from his heartburn felt like it was eating through his chest.
“Whoa, that’s unusual.”
Casper’s whisper brought Kevin back to the moment. He’d zoned out, reimagining the inside of the brownstone. On the runway, a brunette model wore white silk pants, a matching short riding-style jacket, and a lace midriff corset. It should have seemed tacky and cheap. It didn’t. It looked cutting edge and fresh. Kevin leaned in to keep his voice low. “Pretty awesome, huh?”
“I don’t know. That’s a stretch. I can’t see many brides wanting to wear that.” Casper squinted his eyes and cocked his head, as if maybe from a different perspective he’d find the look more appealing.
Kevin smacked his leg. “Stop it. You’ve got to work on your poker face.”
Casper began to reply, but Kevin cut him off.
“Not one word about Lady Gaga, or you will have no cake samples.” Kevin had to suppress a grin. There was something so cute about Casper. He was getting cuter every day, in fact. There was no guile or pretense to him. The very fact that he had the ability to distract Kevin from a runway show without causing irritation was somewhat of a miracle. One that worried Kevin, honestly. “I can’t say it’s my favorite, and I like the more traditional gown silhouette, but it would be good for our store to have a few nonconforming designs. Not every bride wants to look like a princess.”
“Now, this one is pretty amazing.”
Kevin followed Casper’s motion. As the pseudo-suit bride disappeared behind the white partition, another entered the runway from the opposite side. Kevin couldn’t suppress a sigh. So much for poker face. The white dress was a typical Cinderella ball-gown style, tight and fitted on the bust and waist, but by the time it reached midhip, it gradually began to billow out in layer upon layer of gauzy material that trailed behind the model like a cloud. The spectacular aspect was the black embroidery swirling in thick masses over the bodice and waist, spilling over the billowing train like dripping flowers. While also not for every bride, it was the definition of a fairy-tale gown. Not taking his eyes off the floating vision, Kevin patted Casper’s leg this time, not even noticing that he let his hand rest there for a few moments.
He was able to look away once the gown left the runway. “Good taste, Casper. Expensive, but good taste.”
The look Casper gave him was a little foggy, and his pupils were somewhat dilated.
“Casper, are you okay?” Kevin removed his hand from Casper’s leg.
“Oh, yeah. I’m fine.” His voice sounded a little thick as he replied. “How much do you think that gown was? Close to a thousand?”


Kevin had to remind himself to whisper before he responded. “Are you insane? We’re not some mass-marketed discount wedding store. That gown was closer to eight or nine thousand. Maybe more.”
Casper’s gaze cleared. “What? Are you kidding me? That’s a huge down payment on a car. Hell, in some cases that is a car. That’s ridiculous to spend so much on a dress!”
Kevin cocked an eyebrow. “You know, we are going to have to work on your views of wedding gowns if you’re going to be allowed to have actual contact with the brides.”
“Kev, nobody would pay that. Why would they?”
“I’d almost think you were straight right now.” Kevin let out a quiet but long-suffering sigh. “That gown, all of these, even the suit one you didn’t like, are made from the best materials, and most of the embroidery and such is done by hand. They are art, and the bride will feel it when she’s wearing it. When the bridal chains copy that design, and they will, they will do it with polyester blends and synthetic materials. It will be heavier, not breathe as well, and move differently.”
“But for that much money? Seriously? Maybe it would be worth it.”
“Are you telling me that there’s not a difference between the cakes you’re going to make and some other bakery that uses boxed cake mixes and—” Kevin waved a hand between them as he searched for words. “—I don’t know, those premade sugar flowers you get at the store?”
The grimace that crossed Casper’s face somehow made him both unattractive and adorable. “Never say those words again.”
Kevin smirked. “See the difference?”