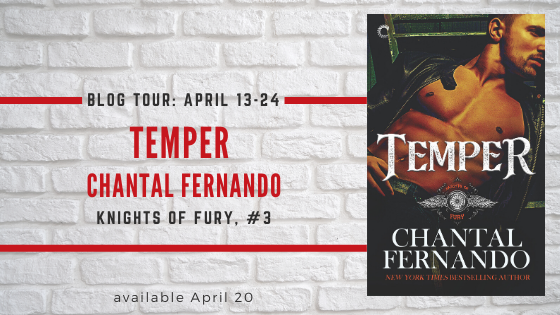 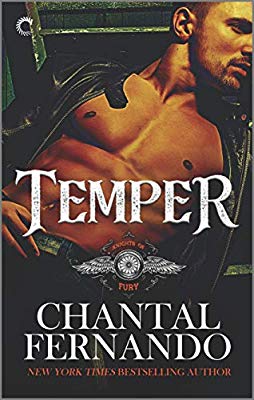 New York Times bestselling author Chantal Fernando returns to the Knights of Fury series with her most complicated hero yet. He may be the epitome of cool, but this MC president isn’t called Temper for nothing…Every year, the hot, tatted biker comes into Abbie’s bar, orders whiskey and asks her out. Every year, Abbie turns him down. After all, dating a man that goes by Temper seems like a really bad idea, no matter how attracted she is to him.But this year is different. Abbie’s different. Older, wiser and tired of being stuck behind the bar in a sleepy town. This year, she’s ready for whatever adventure the sexy but sweet biker has in store for her.Or so she thinks…until an elegant candlelit dinner ends with a dead body.Now Abbie finds herself on the ride of her life, whisked away to the big city in Temper’s protective custody. She should be scared, but—despite his nickname—it’s clear the last thing Temper would ever do is hurt a hair on her head. And when danger catches up with them, Abbie soon realizes that holding tight to her man while straddling a Harley may be the safest place of all.

It’s been a while since I’ve seen [Temper], and he looks good. It’s like the man doesn’t age. He’s tall, strong, and kind of mean looking, but he’s been nothing but nice and respectful toward me. We kind of have a routine going every time we see each other. We chat, we flirt, he asks if he can buy me dinner, and I say no. He accepts that and leaves, until next time.
I don’t know why I always say no anymore. The first time was a combination of him being a biker and feeling so much older than me. But the age thing doesn’t bother me that much anymore. Truth is I’ve never said yes, to any man, to any date. I get asked out by people coming into the bar, but you don’t have to be experienced to know what they are really looking for, and it’s not a loving, long-lasting relationship. My experience is severely lacking, aside from prom and the mistake I made after it, and there’s no saving me now. I’m going to be a spinster. Hopefully Ivy will give me some nieces and nephews I can claim as my own.
Temper places money on the table, with a huge tip, like he always does. “Seriously? Who tips that much?”


His lip twitches. “You can take yourself out to a nice dinner with it, since I know you’re never going to let me take you out.”
“You giving up that easily?” I tease, giving him a flirtatious smile. I don’t know where this sudden boldness is coming from, other than the fact that I don’t want him to stop asking me out, and I’ve only just realized this.
I’ve never met another man like Temper, and I don’t think I ever will. I see how people treat him, avoid him, and make sure not to challenge him. Hell, my own mother warned me to be friendly with him, but never too friendly. He has this air of menace about him, but over the years I’ve also seen how he treats his MC brothers like family, and he’s always respectful, even to the people who work here. I’ve seen him vulnerable when he talked about his Prez… Hammer was his name, I think. He’s never rude, or arrogant—to me, anyway—and he’s always generous and polite. When he speaks to me, he always uses a humble, gentle tone, one that I’ve come to enjoy listening to. I know there is another side to him, and I can’t help but want to get to know that more.
“It only took a few years of rejection,” he jokes, lifting the whiskey glass to his lips. I don’t think I’ve ever heard him make a joke before.
“Maybe this was the year I was going to say yes,” I reply, clearing my throat. I don’t know what’s come over me, but I have the feeling like if I truly do want to take a chance and go on this date, it’s now or never. I’m stuck here, in the same job, doing the same thing every damn day, and I deserve to have a little fun and do something reckless for once in my life. I’ve always been the good girl, the trusted daughter, and the responsible older sister, taking care of my family as much as I can, since my dad has never been around. I know his name, Cohen Pierce, and that he lives in California somewhere. But he wanted, and still wants, nothing to do with me, and that’s fine. I’ve accepted that.
But what have I ever done for me? Other than college, which I had to drop out of anyway, I can’t think of one single thing.
Temper lowers his glass and studies me, brown eyes filled with surprise and suspicion. “You want to go on a date with me? Why now?”
Shrugging, I lower my eyes to the counter before returning them to him. “Time for me to live a little.”


Being safe hasn’t gotten me anywhere in life. 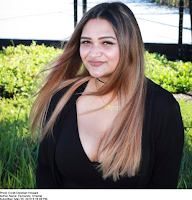