Blogtour: The Parable of the Mustard Seed by Lisa Henry


Hi, everyone. I’m Lisa! Thank you so much for having me here today, and letting me talk a little about my newest release, The Parable of the Mustard Seed.


The Parable of the Mustard Seed isn’t a book that is about faith, but both main characters have definitely had their lives shaped by faith. John Faimu comes from a Christian family. His family is Samoan, and faith plays a big part in their lives—John’s mother attends church and church evens, and his little sister Jessie has been in trouble lately for hanging out with the wrong crowd and skipping youth group. In John’s world, faith—the sort of faith built in laidback churches with community roots—is a balm. In a world that often doesn’t make sense, and is often chaotic and cruel, John’s faith gives him quiet strength.


But for Caleb, the man John loves, things aren’t that simple. Because Caleb was raised in a cult, and the same things that John draws strength from are terrifying and traumatic for Caleb.


When it comes to Caleb, John tells himself that:


He couldn’t share this part of his life with Caleb. Couldn’t even talk to Caleb about God and Jesus and the church, because they meant such different things to Caleb, such horrible, dark things. When John’s mother told him that Jesus was watching he rolled his eyes and behaved himself. If someone told Caleb the same thing, he’d be a mess.


John believed in God. He always had, and always would. Maybe not the same God his mother believed in exactly — hers had all the answers, hers was full of comfort and peace — but he believed, all the same. He’d seen some awful things in his work. He no longer asked how God allowed such things, only comforted himself with the certainty that the perpetrators of evil deeds would burn in hell. And maybe that was flawed thinking, but it didn’t matter. He needed to know that men like Ethan Gray would burn in hellfire forever, and that it was still too fucking good for them. He could never turn from God, because he needed to believe that if there wasn’t justice in this world there had to be justice in the next.
But Caleb had to be an atheist. John understood that.


And John had chosen Caleb over church and would make the same choice every time.


The Parable of the Mustard Seed—the biblical parable, not the novel—is one I’ve always liked.


“The kingdom of heaven is like a mustard seed, which a man took and planted in his field. Though it is the smallest of all seeds, yet when it grows, it is the largest of garden plants and becomes a tree, so that the birds come and perch in its branches.”


In the novel, it’s not the kingdom of heaven that’s the mustard seed though; it’s love, and how it starts out small, but how it expands into something big enough to build on, if only we believe in it. It’s about John, the small seed of Caleb’s love in his hand, eventually trusting that it will be strong enough to spread its boughs. 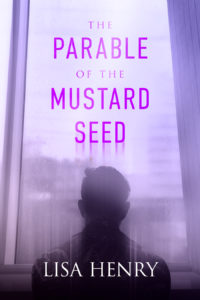 The past never stays buried forever.

John Faimu is an Australian-Samoan police officer who deals with hurt kids every day. He loves what he does, but he’s tired of the grind of shift work, and of trying to find a balance between his job, his family, and the young man who straddles the increasingly blurry line between both.

Caleb Fletcher was the teenager John saved from a cult eight long years ago, and he’s now the young man John wants in ways that neither of them should risk.

Eight years after his rescue, Caleb is still struggling with PTSD and self-harm. John has always been his rock, but now Caleb wants more. Can he convince John to cross a line and love him the way they both crave? And when the monsters from Caleb’s past come back seeking to silence him for good, will John’s love be enough to save him?


The Parable of the Mustard Seed is an mm gay romance featuring hurt/comfort, first times, found family, and angst with a happy ending.

John scrubbed his knuckles over his scalp. He felt more tired now than he had for a long time, and it wasn’t just the shift work. It was Caleb, and this place, and the knowledge that they’d been here before and they would be here again. Different hospitals, different beds, different scratchy blankets and too-cold air conditioning, but all of them stuck in the same old cycle.

Eight years of this.

It wasn’t always this dramatic. Most of the time it didn’t end in a hospital. Most of the time it was increasingly erratic behaviour. It was risk-taking. It was subtle and pervasive, but John knew how to read the signs. He’d talked Caleb down from plenty of metaphorical high places before. Enough to wonder every time if he was only delaying the inevitable. If Darren was, and the psychiatrists and psychologists were, and the pharmacists.

Of course it felt hopeless. It was almost three in the morning and he was sitting in a fucking hospital. Shit always felt dire in the middle of the night.

John reached out and brushed his fingertips against the back of Caleb’s right hand. His skin was cold to the touch, his fingers white and bloodless. Several of his knuckles were grazed. The wounds weren’t fresh.

Darren had said last week that Caleb had punched a wall. Out of nowhere. No warnings signs, no meltdown, just a sudden, furious burst of anger that had broken over him. And afterward, Darren said, when Caleb was sitting on the floor nursing an icepack, he’d refused to talk about it.

Sometimes even Caleb didn’t know what the fuck was happening in his head.

John’s fingertips brushed the wrinkled edge of the tape that held the canula in the back of Caleb’s hand. The plastic tape was dry and rough.

John straightened and turned his face toward Caleb’s. His face was pale, his lips colourless. Dark circles carved out hollows under his eyes.

John leaned closer and frowned. “What the fuck are you doing, mate?”

“Were you clubbing?” John gestured at his clothes: dark jeans, a tight shirt, and—what were the kids calling them these days?—expensive kicks.

Caleb inspected the bandages on his arm. “Yeah.”

“Don’t bullshit me, Caleb.” John was always there to pick up the pieces, but he didn’t coddle Caleb. He never had, not even at the start. “You think I drove all the way here to listen to you lie to me?”

“I was with a guy.” Caleb flinched as he said it.

Caleb’s gaze faltered. “I was with a guy.”

“So you said.” John wondered what reaction Caleb had been expecting. “Were you safe?”

Caleb nodded, turning his face away.

John studied him for a moment, unsure how to react. A part of him was afraid to react at all in case any reaction was an overreaction. Caleb wasn’t coming out as gay—he’d done that at nineteen—but by admitting to a sexual encounter he was coming out in another way: Caleb was coming out as human being who wanted to be touched. A human being with sexual needs. This was a big step. The biggest in a long time. Nobody had expected him to remain celibate forever; nobody thought that was remotely healthy. But fuck, this big step had turned into a hell of a stumble, hadn’t it? Caleb was in freefall.

John reached out and squeezed Caleb’s shoulder. “Did this guy try something? Something you didn’t want to do?”

“No.” Caleb shifted. His worried gaze found John again. “No, it was me, not him.”

“We went to a hotel.” Caleb’s gaze slipped away again. “He said I was a slut.” His voice hitched. “Said I was bad.”

John moved his hand from Caleb’s shoulder to his cheek. Caleb was still so cold. “If you tell me he was being a prick, I’ll track the fucker down.”

“The way he said it, I was supposed to like it. Wasn’t his fault.” Caleb closed his eyes. “I didn’t even mind, not much, not when he was there.”

John sighed. “What happened when he left?”

Caleb shuddered. “When he left, all I could hear in my head was Ethan.”

John tensed, and tried not to let Caleb feel it.

John withdrew his hand. “Look at me.”

“Next time you hear Ethan Gray in your head, you don’t listen to him.” John shook his head. “You call you dad, or your doctor, or you call me, doesn’t matter what time, you call me and I will be there. You understand me?”

Caleb jerked his chin in a nod.

“You don’t cut yourself, Caleb.” John frowned. “You understand me?”

The worst part, John knew, was that Caleb meant it, and would go on meaning it right up until the next time he was holding a blade against his wrists.

You’ll break my heart one day, Caleb Fletcher, I know you will.

Caleb sighed and closed his eyes.

John watched him until he fell asleep, then got up and hunted down a blanket. 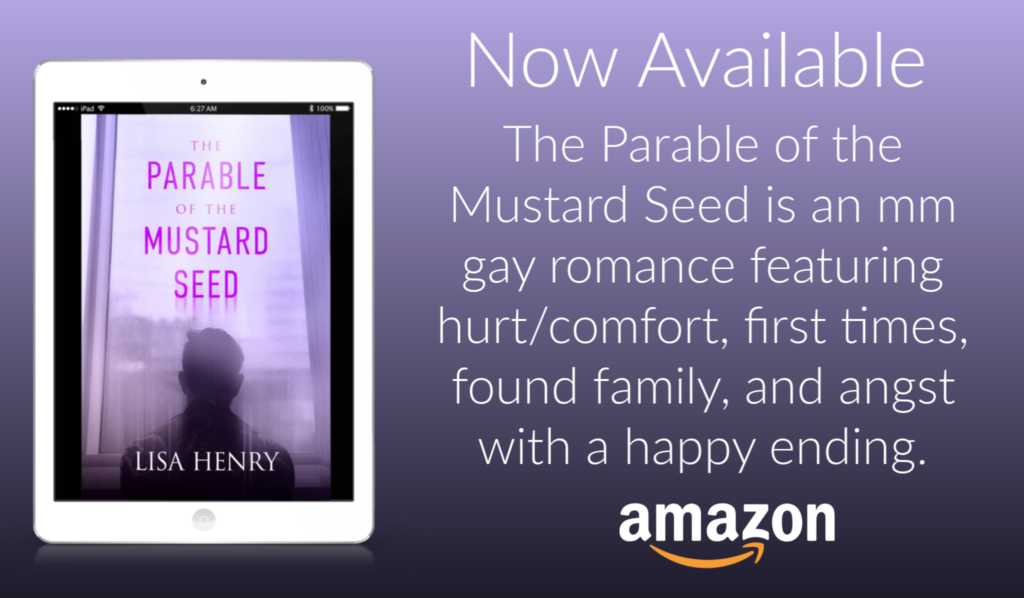 Lisa has been published since 2012, and was a LAMBDA finalist for her quirky, awkward coming-of-age romance Adulting 101, and a Rainbow Awards finalist for 2019’s Anhaga.