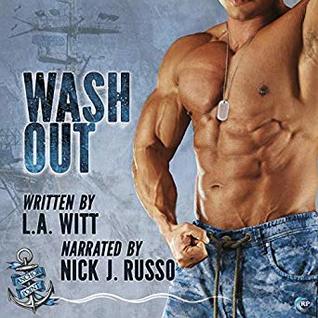 
Casey Olson has always known he was destined to be a Navy SEAL, and the best day of his life was when he was accepted into training. The worst day was when a snapping bone ended his dream.

This one just didn't work as well for me as previous stories have. But it also surprised me a bit in that between Logan and Casey...it was Logan who I liked the most. If you had told me that he would be my favorite after reading 'Afraid to Fly', I probably would have looked at you like you had two heads and neither of them was working right.

Seriously when I started listening to this one and realized who Logan was I paused the audio book for a moment and asked myself... "Really? Do I really want to listen to a story about this asshat?" and surprisingly my brain said "Yes, Karen. Yes you do, because everyone deserves a second chance even those who live in books." So I continued and "SURPRISE!!!" what I discovered was that Logan wasn't who he had seemed to be. Logan for one was ex-military and as is too often the case with those who have seen combat, Logan has his own demons to battle. So getting to see him here in a different light as someone who was fighting to be a better person to get his life back on the rails was very much a good thing and it didn't take long before I was a confirmed Logan fan.


Casey...for me Casey's a mixed bag on one hand yes, I did feel bad for Casey. All he ever wanted to be was a Navy Seal and he was working so hard to make his dream come true and to have that dream taken from him so suddenly and so unexpectedly is nothing short of heartbreaking. But, I really needed for Casey to get over it sooner than he did. I know it's not easy to go through something like this and a person needs time to re-evaluate their life and make new plans but Casey almost seemed to me like he was overthinking the things that people were saying to him and looking for a reason to be offended by it...which is code talk for he was looking for an excuse to vent his frustration and again I get that but 'Dammit Casey, you wanted to be a navy seal than show us that you had what it takes to have been one. Put your bit boy panties on and refocus on the new mission...creating a new career path for Casey.

Having said all that Casey did redeem himself a bit at the end but by then...it was to little, to late to make him seem anything more than ok for me.

Once again with this story as in previous stories we are treated to a peek here and there of previous characters such as Clint and Travis (not so much on page but for me where there is Clint, Travis is close behind), Diego and by virtue of Diego it felt like Mark was also close at hand.

Of course all of this was once again brought to auditory life by the talented Nick J. Russo.  I know there are other really awesome narrators out there but for me this series belongs to this narrator and he's brought it to life and added depth and personality to the characters in a way that few others are able to.

Overall this series has definitely been a success with me and while I've still got one last audio book to go I'm fairly comfortable saying that I see me revisiting the men of 'Anchor Point' again in the future and if we all have to hibernate for much longer the future may be closer than I think.

An audio book of "Wash Out" was graciously provided by the publisher in exchange for an honest review.