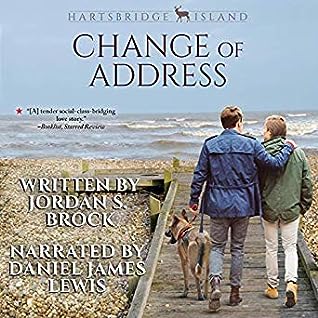 This was sweet...but it just didn't pack the feelz that I was expecting...

After months in a VA Hospital in Washington, Michael Baldwin and his service dog Kaylee head to his families summer home on Hartsbridge Island to try and get on with his life. A head injury sustained during his enlistment has left Michael with PTSD, aphasia and other cognitive issues.

The last thing he needs is a father who wants to cash in politically on what happened to his son during his deployment overseas by parading him around like a show pony. Ironically it's because of his father's machinations that Michael encounters what he truly does need...a kind and gentle man who wants to feed not just his body but his heart and soul.

Josh's life hasn't exactly gone according to plan...but then for Josh the plan was never very clear to begin with. Dropping out of high school to care for his father and help run the family business was only suppose to be a temporary thing but somehow it's become Josh's life and he's ok with that. Josh doesn't consider himself to be much of a cook unless it's bagels and breakfast on the menu. Add in the fact that Josh has a couple of issues of his own and you'd almost wonder how these two came to be.

There was a lot about Michael and Josh that worked for me. In general they both felt like someone that you meet out there in the real world they had their good traits and their bad. They were flawed like any average person.  But they also saw the best in each other. For me the characters had a very genuine and real feeling about them.

The other thing that stood out for me in this story was the dichotomy of Michael's relationship with his father versus the relationship between Josh and his father. Ironically the one thing that also didn't work as well for me as it could have is that the issue between Michael and his father felt like it needed a bit of a clearer resolution although when it comes to family issues the resolutions are often not as clear as we would like them to be. So while this needed more clarity in it's own way the resolution felt realistic enough to be believable.

Unfortunately in spite of the fact that overall I enjoyed this story and I liked both of the MCs as well as some of the secondary characters and while the narrator...Daniel James Lewis is a new to me narrator who really delivered voices that for me matched and suited each of the characters helping to bring them to life.

While everything worked in theory and the story held the potential to pack such an emotional punch somewhere along the way things just fell short and what I had thought would be an 'I love it!!!' story turned out to be a case of 'This was a sweet story and I enjoyed listening to the audio book.' so all in all still not a bad thing by any means.'

"Change of Address" was originally intended to be the first book in the 'Heartsbridge Island' series, however, it's been four years since it's release so I'm not sure whether there is more to come with this series or not but this story can easily be read as a standalone with a solid HEA ending, so if there's more to come that's cool but if not readers can comfortably stop at this story and not feel like they're left hanging with unanswered questions.

An audio book for "Change of Address" was graciously provided by the publisher in exchange for an honest review.