Ean and Matthias have known they’re mates for a while, but Matthias has been unwilling to claim Ean. He believes his past and age-old secrets are too big for Ean to overcome, so instead keeps Ean away by irritating him.

Depressed and no longer able to be near the dragon-shifter, Ean leaves the pack house and, after a night of heavy drinking, makes a life-changing decision that pushes Matthias into action.

As the blood moon draws nearer, the Chevalier Pack is called before a tribunal of paranormal leaders to assess the Alpha’s rumored mysterious abilities. Matthias decides to share his secrets with a little help from Colby. And to top everything off, they face another attack by the McBane Pack, which the Chevalier decide will be the last.

After adjusting the stack of scrolls tucked beneath his arm, Matthias opened the door to the vaults and headed down the stairs. He had no idea what was contained in the newest additions to the horde library, but Sadie had insisted he take them, look through them, and archive them appropriately. The sheer number of scrolls he was carrying guaranteed weeks of sequestered reading, and he was looking forward to it. Matthias often disappeared for days within the vault stacks, and no one cared. He was moody and antisocial at the best of times and preferred his own company to that of other dragons.

At the back of the library, he dropped the scrolls unceremoniously on top of the desk he’d claimed as his, decades ago. Since no one came down to the vaults, no one had challenged his claim. As far as the horde was concerned, the vaults were Matthias’s domain. The soft thump of little feet echoed in the cavernous space, dulled slightly by the papers and leather-bound tomes that filled the shelving. Matthias knew who those steps belonged to, and his disposition lightened a bit. Sadie’s son had a thirst for knowledge that Matthias admired, even if it did mean his quiet sanctuary was invaded on a regular basis by the child.

“What are you doing down here, Luca?”


The fledgling hefted a book that was nearly a third his size, and Matthias recognized it as an old human-written story about a witch. He wasn’t sure it was an appropriate choice for a fledgling of just eight years to read, but he’d learned early on that Luca was not an ordinary little dragon. There was something special about him: something that reminded Matthias of the child he’d raised centuries before.

“Nothing in that book is factual,” Matthias told the boy.

“That’s good, because the witch ate the kids.” Luca winced before turning around and disappearing into the shelving.

“Don’t make me come behind you and straighten up,” Matthias ordered, his voice carrying through the room despite him not raising it the slightest bit.

Twenty entirely-too-quiet minutes passed before Matthias rose from his chair to go check on Luca. He found the book the boy had brought back exactly where it should be, but Luca wasn’t there. Returning to the main aisle, Matthias glanced down each row as he passed until he finally found Luca sitting on the floor with his back against the stone wall with a book opened across his little legs.

“This isn’t a row you’re allowed to be in,” Matthias said, shocking the little boy who was clearly immersed in what he was reading.

Matthias squatted in front of him, closed the book, and willed the panic he felt explode in his chest to not show on his face as he pulled the book from Luca’s grasp. He stood and placed the tome well above the boy’s head. Luca was entirely too curious for his own good.

“But I liked that story,” Luca complained. “It had a dragon married to a wolf, and I didn’t know that could happen, and I want to see what happens next.”

Matthias swallowed thickly. Luca thought he was reading a fictional story, but Matthias knew all too well that the Chevalier family had been real, and he’d be damned if he put the idea of interspecies matings into the head of the horde matriarch’s son. Pushing the memory of his own interspecies mating to the back of his mind—because what did it matter anymore?—he looked down at the fledgling.

He steered the boy into a more appropriate area of the vaults to be explored and then returned to the tome he’d confiscated. Pulling it off the shelf, Matthias thumbed through page after page of his own historical account of the Chevalier, removed the most informative and thereby damaging chapters, and then replaced it on the shelf. Luca was only going to get older, taller, and more curious with age. Matthias wouldn’t risk him finding the book again.

Later that night, after darkness had fallen and the compound had grown silent with slumber, Matthias burned one of the last firsthand accounts of the Chevalier—his own. Why he’d thought it was a good idea to put that horror down on paper, he’d never understand. Youthful folly. All that was left to do was locate and obtain Alietta’s journal, the final remaining written history of the family and subsequent events Matthias had yet to destroy. For now, he was content knowing the only memory of the Chevalier that existed in the Duray Horde was now locked safely away inside his head; a place no amount of childhood curiosity could penetrate. 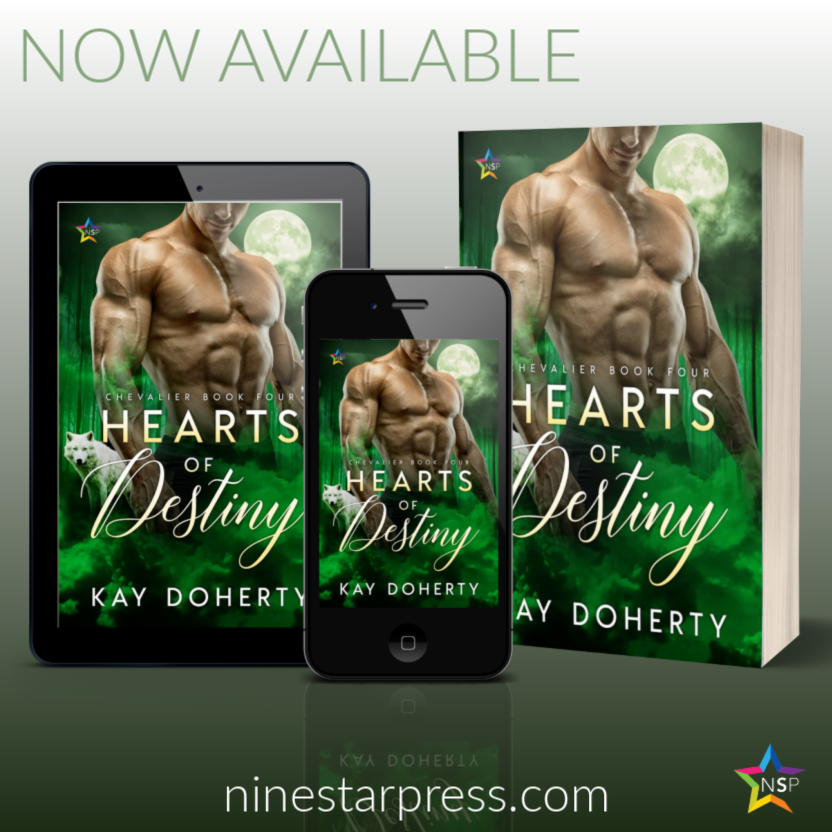 Kay Doherty is an omnisexual/polysexual who lives in Colorado with her poly-family, Mike, Keri, and Tigz. Her house is overrun with cats and dogs. Family is important to her so there are daily texts, frequent visits to her parents, and constant banter with her brothers. She happily suffers a severe addiction to coffee and Mexican food. She loves to read and write and can easily become consumed by it for hours, much to the dismay of Mike and Keri (Tigz is an enabler). On occasion she can be convinced to venture out into the world of the living despite being annoyed by the sun shining in her face.