I have always loved horror stories. No, seriously. Always. Some of my earliest memories involve sitting in the living room with my dad on Sunday afternoons, watching old monster movies on TV. When I was very young, Disney movies sent me screaming out of the theater (really), but plop me down in front of Dracula or Frankenstein and I was happy as could be.
The first story I remember writing, circa first grade, was about a haunted spacesuit. Sadly, that masterpiece no longer exists. I learned a few years ago that Arthur C. Clarke wrote a story in the 50s called… “The Haunted Spacesuit.” It’s possible I read that story before writing mine (I learned to read very young and by first grade was reading pretty advanced stuff—and annoying the heck out of my poor teachers), and therefore my first work was actually somewhat plagiaristic. I don’t remember. All I do know was that from the beginning, I dug scary.
I enjoyed the movies Rebecca and Les Diaboliques, and I read a lot of horror in various guises. As a teenager I adored the gothic horror of V.C. Andrews’s Flowers in the Attic. I also loved Faulkner’s “A Rose for Emily,” Rice’s Interview with a Vampire, and everything by Ray Bradbury or Edgar Allen Poe. Oh, and Stephen King—I gobbled everything he published.
Why is horror so delicious? From a reading standpoint, it’s kind of like riding a roller coaster or eating habanero salsa. It gets our pulse racing in a safe way. It’s also oddly affirming. No matter how much my life might suck at a particular moment, at least I’m not in the middle of a zombie apocalypse or being stalked by a homicidal clown. Writing horror is fun for the same reasons. Plus it gives the author an opportunity to tackle social issues in a fresh way. Consider, for example, Get Out, Invasion of the Body Snatchers, and Night of the Living Dead, among many others. This was part of the reason Fred and I decided to write a horror story.
Given my love for the genre, it’s a little surprising I haven’t written much horror. I’ve crept around its edges with some paranormal, dark fantasy, and suspense, but I never quite plunged in fully. Until now. I hope you enjoy reading Hallelujah as much as Fred and I enjoyed writing it.
What are your favorite horror movies or books?
What are your favorite horror stories? 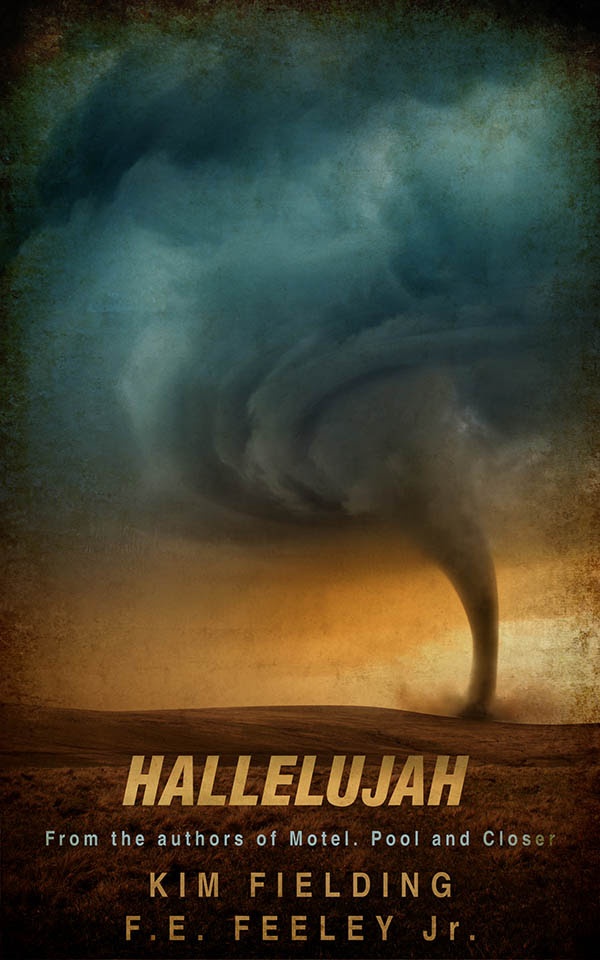 Can you hear it?

Whispering in the dark.

Secrets only the dark knows.

Joseph Moore, choir director for the First Baptist Church of Lenora, Nebraska, has secrets of his own. Terrible, lonely secrets. One that involves natural human desire. One that calls forth powers he cannot begin to understand. Both with the potential to destroy him and those he loves.

Now the world is changing. The darkness, the shadows, the ghosts, are closing in—and Joseph and his lover, Kevin, are being stalked by a merciless demon, hell-bent on possession.

Can you hear it now?

There in the dark.

It's whispering your name.

Warnings: Violence. This is not a romance.

Joseph fought against the hands on his shoulders. The room was sweltering, and all his strength had sapped away.

He was being shaken, and despite his unwillingness, his eyes opened. Kevin’s face stared down at him.

Joseph pulled away and fell backward onto the altar steps. His attempt to break the fall caused his wrist to smart painfully, and he whimpered. His whole body shook; he felt sick to his stomach.

Kevin raised his hands in surrender. “What the hell, man? Who did this to you?”

“What do you mean, ‘what’? You’re beat to shit. Did someone jump you?”

Joseph looked down and saw his scratched-up legs and swollen ankle. He scanned the sanctuary, half expecting the shadowed figure to be lurking somewhere nearby. But that wasn’t the case. All the lights were on, brilliantly illuminating every corner. There was no sign of the spirit who normally haunted the place.

“Who are you looking for?”

Joseph faced Kevin once again. “What? No one. What are you doing here?”

Although Kevin had been bare-chested at their last meeting, he was wearing a shirt now. Well, part of a shirt. It was an old Budweiser tee with the sleeves cut out and the sides wide open. When he moved, it revealed glimpses of his chest and flat stomach. Joseph felt his face flush as he averted his gaze.

“I was driving by and saw all the lights on and the door open. Figured the joint was getting robbed or somethin’. Then I found you wailing on the floor in…. Damn, dude. Look at your wrist.”

Joseph saw it was swollen. The memory of where he’d been flashed in his mind once more. The red-eyed gaze was burned into his memory.

But that had all been a dream, hadn’t it?

Please, Lord, let it have been a dream.

“Who did this to you?” Kevin repeated with a furrowed brow.

“Nobody. Look, I came back here because I thought I left something, and I fell. I must have banged my head or something.”


Joseph snorted a laugh and looked up at him ruefully. “I don’t know what happened.” He hoped Kevin would leave it alone.

Outside, thunder crashed loudly enough to make them jump, and through the front door of the church, they could see the rain falling in torrents.

Joseph watched him go, Kevin’s ass bouncing as his long legs carried him out of the door. “Dammit,” Joseph muttered as he clenched his eyes closed.

He tried to get up, but as soon as he put weight on his ankle, it gave and forced him to sit back down.

What am I going to do?

Just then he saw the ghost once more. She was floating on the upstairs balcony, looking down at him. Her mouth was moving, and if Joseph sat really still, he swore he could hear her words, carried on the wind that howled through the open church door.

Rock of Ages, cleft for me

Let me hide myself in thee

He felt sadness wash over him. She wasn’t terrible to look at; in life she must have been quite beautiful. But he didn’t know how to help her.

“You must help them, cher.” Celine had said.

Kevin dashed in through the door. His jeans were soaked and his wannabe T-shirt stuck to his muscular build. “Well, we got two options.”

“We could wait out the storm before I take you home, or I can haul your crippled ass right now into said storm and take you home.”

Joseph reached out his good hand to Kevin, who grasped it and pulled. Joseph lurched to his feet and, in trying to keep the weight off his swollen ankle, ended up clinging to Kevin. They were almost nose to nose, staring into each other’s eyes as they held fast.

Blood pounded in his Joseph’s head. “I gotta get home.”

Kevin’s long eyelashes fluttered once, twice, three times before registering what he’d said. Yet his hands didn’t move. The two of them looked as if they were on a dance floor waiting for a waltz to start.

They moved slowly across the floor of the church.

“You gonna tell me who did this?”

Joseph nodded. “Yup. It’s been a hell of a night.”

They closed the door behind them, got into the car, and drove cautiously into the downpour with the windshield wipers slapping.

After having migrated back and forth across the western two-thirds of the United States, Kim calls California home. She lives there with her family and her day job as a university professor, but escapes as often as possible via car, train, plane, or boat. This may explain why her characters often seem to be in transit as well. She dreams of traveling and writing full-time. 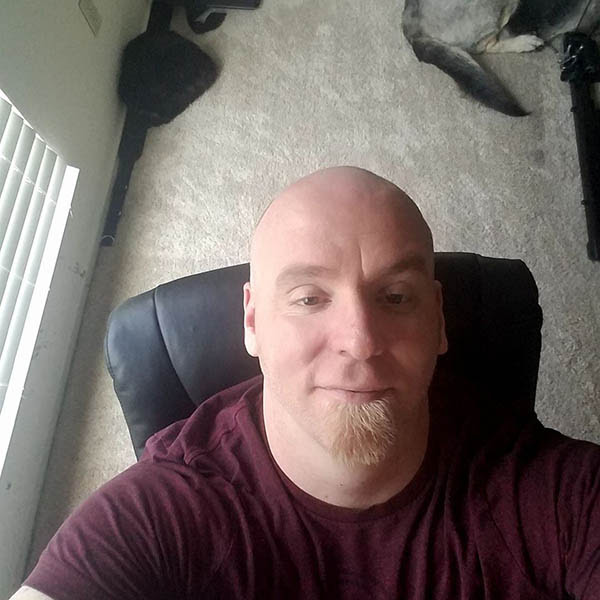 F.E. Feeley Jr.
First and foremost, I am a husband to my wonderful husband, John. I am a father of our five-year-old German Shepherd, Kaiser. I am an avid reader of Mysteries, Horror, and Suspense, and biographies. I am a gamer. My favorite ones are Dragon Age, Mass Effect, Star Trek Online, Skyrim, Assassin’s Creed, Fallout, and Civilization Five. I love to cook and I love trying new recipes (hint hint). I am an avid music junkie from POPular music to Opera, to Showtunes, Gospel, Rock, Rap, and Hip Hop. I am also a Poet – a lot of which is offered for free. And I do some gay fiction writing from time to time.

I love connecting with people. As an ex-fundi, I grew up in a world where there was this invisible boundary set down between me and the world around me. I felt more like an observer than an actual participant in that world. Since I’ve left fundamentalism – it has been my constant endeavor to be a part of the world. To be a part of humanity. And when I write my poetry or my books, I draw from the experiences of being raised in that environment as well as the experiences of tasting the bouquet of humanity I’d been denied all those years ago.

Kim and F.E. are giving away a $20 Amazon gift card with this tour.