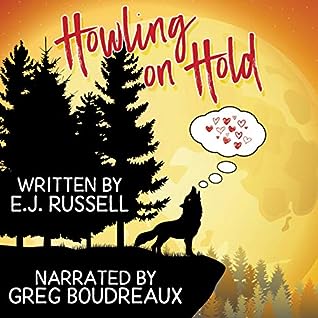 Warning: Many Frisbees are harmed in this story, forgiveness is not always easier than permission, and the five-second rule does not apply.

So the lovely Ms Sandra says to me..."I read this and liked it, want the audio?" of course I scampered off to Audible to listen to the audio clip for it and saw that the narrator was none other than Greg Boudeaux, skipped the audio clip because...Greg Boudeaux, need I say more? I scampered back to my e-mail and said 'Yes please'. Seriously how could I go wrong? I couldn't and didn't, ok?

First off can I just say this is a shifter book but hey no my first ride at this rodeo and it's by new to me author E.J. Russell...new to me, not to a whole lot of other people.

What I found here was a story that simply worked and worked well for me. It was cute and touched with humorous moments that had me laughing and frequently smiling. There were a whole lot of characters from 'Fae Out of Water' and 'Supernatural Selection' previous series by this author and as someone who hasn't read any of these books I can comfortably say that while I read/listen to and very much enjoy this book, I'd really like to go back and enjoy the earlier books as well because there were times when I wouldn't exactly say that I felt lost but I did feel like something was missing and I wasn't quite getting the connections between characters.

Tanner's getting close to the end of his 3 year 'Howling' and fears getting recalled to his pack...he doesn't want to return to the remote and isolated pack much less become its Alpha. He wants to go to college and learn and see what the world holds for him but more importantly he wants to find out how it would feel to have Chase hold him.

Chase is the RA at Tanner's Howling residence and he can't in all honestly deny that he's attracted to Tanner but as Tanner's RA he's just going to keep that little bit of info to himself...because it just wouldn't be appropriate and that maybe true or at least it was true until the night of Tanner's 21st birthday when it seems that 'all hell breaks loose' and it's going to be months before anyone figures out everything that really happened.

When Chase realizes that Tanner is missing he decides to take matters into his own hands and he goes to 'Quest Investigations' for help (fans of this author's work will recognize this agency from the 'Fae Out of Water' series).

With the help of Mal and *gasp!* Hue (as in Hu Man, seriously it's a supernatural joke or you can just think Dad joke...I did), Chase begins his search for Tanner and this is where things really begin to get fun and interesting.

There were a lot of interesting characters in this story and not all of them came from previous books of the authors. Tanner's house mates at 'Howling' residence all seemed to have their own challenging and unique personality...there was Hector and his love of food all things food and he also seemed to be a bit of a tech geek, then there was Gage I didn't really get a strong sense of his character and of course this makes me think we need to find out more about him, there was also Jordan and if you've read/listened to this book you can't forget Jordan...lock down your Frisbee everyone and watch out for the holes. Jordan for me was like a squirrel on crack. He went from one thing to next so fast that he left people feeling a little dazed and confused but very much amused, in spite of the fact that they we usually left holding on to a very gnawed on Frisbee as they fell into a hole that wasn't there 5 minutes ago.

Tanner and Chase were very well matched each having their own challenges to over come and each containing that quiet inner strength that for me lies at the heart of any true alpha male.

While I enjoyed the ending and it was nice as it was, I think I would have liked a little more finality in Chase and Tanner's relationship...but maybe that'll come in a future story?

'Howling on Hold' was one of those stories that I found to be totally entertaining. I enjoyed the characters, the story line, the pacing and add in the superb narrating skills of Greg Boudeaux and this one was pretty well a guaranteed hit for me. Overall 'Howling on Hold' was the type of story that left me smiling and feeling entertained.

An audio book of 'Howling on Hold' was graciously provided by the publisher in exchange for an honest review.