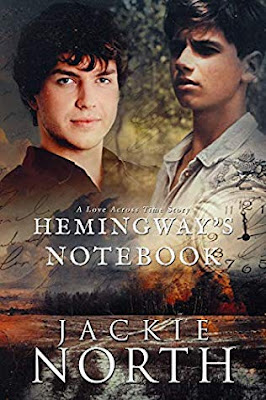 In present day, Jake, lonely and cut off from his parents, travels to the Chamberlin Inn in Cody, Wyoming to work on extra credit for his college seminar.

In 1932, Sebby labors at the Chamberlin Inn for pennies a day, wishing with all his heart for a better life.

While taking photographs in the room where Ernest Hemingway once stayed, Jake is flung back in time to the year 1932. There he meets Sebby who is living on the edge, half starving, a victim of the Great Depression. He’s been dodging rent collectors, getting behind on doctor's bills, trying to care for his ailing Pop.

Sebby falls hard for Jake with his movie star smile, but knows something is different about him. Jake wears strange clothes, talks too fast, and doesn’t look like he’s gone hungry a day in his whole life. He’s also the handsomest boy Sebby has ever seen.

Jake is drawn to Sebby’s dark eyes, shy smile, and gentle heart. Sebby is like nobody Jake has ever met. And though the year 1932 scares him to his very core, he needs to decide. Go home? Or stay and weather the Depression with Sebby, whom he has grown to love.

This is my favorite of the Love Across Time books, which is saying something, as I've loved them all.

Hemingway's Notebook is a standalone, featuring different characters than the previous books (book 1 is also a standalone, but books 2, 3, and 4 are related and should be read in order) and set in a different time (late fall 1932 in Cody, Wyoming).

The characters are fully realized, and the setting (Great Depression in the American West) comes alive. All the horrors of life during the worst economic downturn in the history of the industrialized world are stark on page: poverty, hunger, sickness, racism, hopelessness.

Ernest Hemingway is a secondary character in the story, and he's presented as a wonderful human being—kind, patient, and treating everyone as his equal. I've never been a fan of Hemingway's writing, but this story makes me want to revisit A Farewell to Arms.

The premise of the story is that Jake, a modern day college student with a distant mother and perennially critical father, stumbles back in time when he visits a room Hemingway stayed in during October 1932.

Jake finds himself branded a hobo and drawn to the waify, sad-eyed boy named Sebby who, together with his loving Pop, is working at the hotel where Hemingway stayed. Pop, struck with pneumonia, is actually too sick to do much work, so Sebby does it all: hauling coal, moving furniture, helping in the kitchen, and protecting the two Polish maids from sexual harassment at the hands of the nasty hotel manager.

Pop and Sebby are as close as two people can be. I loved the gentle, trusting relationship between father and son, and how both brought Jake into the fold.

Jake is no hero, but he becomes one to Seb. Initially wanting to return to the future, Jake falls in love with the innocent, proud Seb. Jake likes belonging to a real family, which includes the Polish cook, Janina, and her two daughters.

The relationship between the MCs is a thing of beauty. Seb doesn't even have an awareness of his own sexuality until Jake comes along, but he can’t stop looking at the handsome, vibrant man who appeared out of nowhere. Their connection is all about togetherness, sweet kisses, and tentative touches. This is not a very steamy story, but that in no way diminishes the love between the MCs.

The ending is a tentative HEA, not because I doubted the men's love, especially considering the sacrifice Jake makes for Seb and Pop, but because their future is hopeful but uncertain. I am praying and hoping that the next book is set in the same time period and we catch a glimpse of these incredible characters again.

I cannot recommend this book, or this series, enough!