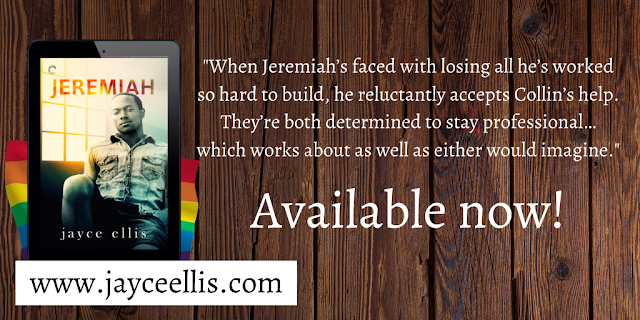 Jeremiah Stewart’s sexuality is no one’s business. Not that he’s hiding it. When—if—he finds the right one, he’ll absolutely introduce him to Mom. But a late-night brush with a sexy stranger in too much lip gloss has him rethinking nearly everything…

To Collin Galloway, direction is a four-letter word. Sure, he hates his job, he hates living with his parents and he really hates watching everyone move on without him. But he doesn’t know what he wants to do, long-term, and he won’t figure it out by thirsting over Jeremiah, the superhot, superintense paramedic who is suddenly everywhere Collin looks.

When Jeremiah’s faced with losing all he’s worked so hard to build, he reluctantly accepts Collin’s help. They’re both determined to stay professional…which works about as well as either would imagine. But Collin only does closets with clothes, and Jeremiah has to decide if he’s finally found the one worth bringing home to Mom.


I waved before stepping on [the elevators] and pressing the button for ten. I just barely caught the muffled “hold that” from down the hall.
No lie, I was tempted to let it close and let whoever it was catch the next one, but I pressed the door open button and three people staggered on. And I fucking choked on air because one of them, a dark-haired man with brown eyes smudged with liner, was about the prettiest thing I’d ever seen.
He was also apparently the only sober one, and he gave me a tiny smile. “Thanks. Appreciate it.”
I nodded and posted up in the corner. The girl could barely stand up straight, probably part liquor and part the obscene heels she was wearing, and the other guy, a blond, was red-cheeked and giggling to himself. But the brunet could get it, even though the pseudo-spiky hair that had probably been perfect a few hours ago had wilted in this fuck-ass humidity. White boy problems. His shirt was sticking to him, and…did that bitch say PrEP-py on it? Like a neon sign he was trying to hit. I homed in again on the blue liner and sparkly lip-gloss he was gnawing off. I wanted to stop him, soothe that bruised lower lip with my tongue, and…the thought made my body stir in ways it hadn’t for months.

Fucking hell. I closed my eyes and willed my imagination and my dick to calm all the way down.
The floor dinged to a stop and I looked forward to find him staring at me, his eyes wide and searching and gorgeous. Eighth floor. I held my arm out while he and the blond, but mostly he, helped the woman off, but her foot caught in a thread on the carpet and she stumbled, taking the blond down with her. They laughed, the sound almost hyena-like with the wheezing and gasping, while the brunet stood there, his shoulders and head sagging. Fuck it, the way this night was going, they wouldn’t get any farther if I left them. I stepped out and let the elevator close behind me.
“You need some help?” I asked.
Dark-hair looked at me, his eyes wide, and shook his head. “Oh, no need. I’ve got them.”
See, now nine times out of ten I would’ve found that endearing, that he was cautious of me as a stranger and wanted to make sure his drunk friends were okay. And my Black ass knew better than to involve myself with drunk folks. I was going to pay for this later.
“I’m a paramedic. Let me help.” I bent over and scooped the girl into my arms, settling her head against my shoulder. She smelled like cheap liquor and expensive perfume, and didn’t that sum up DC in a nutshell? “Where am I going?”
He gnawed on that lip again.


“Stop that,” I said, and he jumped. Skittish little thing. I wanted him.

Jayce Ellis has three loves: her husband and her two turtles. Hubby loves her back. The turtles she's not so sure about, but they do love their sports (Bay Area teams FTW!). She still hasn't figured out why she lives in Northern Virginia, where there's weather, instead of California, where she's from, and where it's just...pretty. Jayce spends her days divorcing happily-married couples (or so she's been told), and her nights talking maniacally to herself. Thankfully the recorder catches her rumblings and magically turns them into words on a screen. Painting nails is way easier when you don't actually have to type, and with well over 500 polishes to get through, there's a lot of painting going on.

Notwithstanding her no-good, very bad, horrible day job, Jayce seriously believes that true love conquers all. Even Maleficent said it. Sure, she was having an epic Mean Girls moment at the time, but she still said it. And she's right. The only thing Jayce loves more than writing about true love conquering all, is hearing from readers who feel the same way.