Greetings and thank you so much for allowing me to drop into your blog today to talk about my newest release, Halfway to Someday. While I never set out to write a character who was dealing with abuse and too embarrassed to admit it, that’s what Jesse’s story, in part, turned out to be. I can’t describe how many tears I shed while writing this novel, but as it changed, evolved and Jesse began to peek out of his shell a little, I started getting all of these thoughts and ideas for stand alone stories, so that these characters have the opportunity to pop back up in the future, that’s how deeply in love I fell with them during the writing process.
In this book, Jesse the person is pushed to the forefront of the story, not Jesse the performer or the musician. All that glitters is certainly not gold in his life, but then, his bandmate and best friend Luke’s cousin Ryker’s life isn’t all fireworks and apple pie either. He’s landed at the cabin Jesse’s staying in just ahead of a snowstorm, thanks to a lie by omission, but it’s a blizzard that strands them there and forces them to see past their own pain.
One thing that began to emerge over the course of the story was that there were different kinds of strengths and more than one way to be fragile. Seeing these two discovering that and learning how to work around each other’s issues without stomping all over anyone’s feelings really allowed me to dive deeper into who they were at their core, and I hope readers will enjoy watching them evolve over the course of the story. 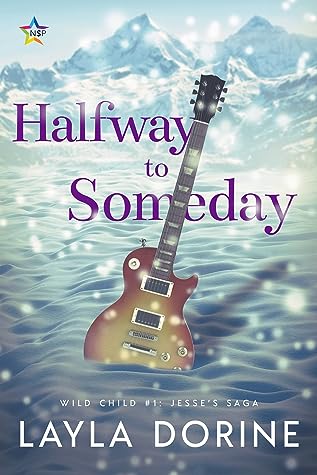 Rocker Jesse Winters just wants to be left alone. If he could melt into oblivion he would and bid farewell to the wild child of rock n’ roll so many have dubbed him in recent months. Truth is, there was never anything reckless, wild or even deliberate about most of the things that had happened on Wild Child’s last tour, but had anyone cared to listen? No! Which was precisely why he was sitting in a cabin high up in the Colorado mountains, hoping the incoming blizzard would bury him forever.

Ryker Jorgensen left the VA hospital with a bunch of prescriptions and pamphlets on how to deal with reentering the civilian world, not that he’s in any hurry to do so. His nightmares still keep him up at night, and every new limitation he discovers gives him more reason to believe that he’s hopelessly useless now. Better to drive up to his cousin’s cabin and lick his wounds. Come spring, maybe, he’d look into being around people, if only for long enough to make the kind of money he’d need to buy his own secluded place.

The last thing he ever expected to see was the man whose face had been plastered in his footlocker and his dreams for the better part of the past six years, but Jesse Winters is nothing like he imagined. When trying to leave Ryker out in the storm doesn’t work, Jesse resorts to ignoring him. But two wounded souls trapped in a snowed in cabin have little choice but to reach out for one another when emotions get frayed. His only hope is that Jesse will trust him enough to let him drag him back from the edge before he’s just another burned out star in the legacy that is rock n’ roll.

The winds whipped against the truck so hard, it rocked, throwing him out of the past. A mercy, despite the violence of the storm. He took that as his cue to get out, grab his duffel bag, and head for the door. Every step took effort. The snow was piled high, and some of the drifts were well past his knees. How easy would it be to lie down and go to sleep in it, never to wake again? He forged a sloppy path to the door, complete with an outline of his body when he face-planted inches from the steps. He didn’t want to think of how painful that misstep could have been had he actually struck the steps, or perhaps it would have made life easier for him to give himself over to the cold. Instead, he gripped the handrail and climbed the steps, coming to stand before the door of the cabin.
Knocking loudly, Ryker shivered, pulling his coat tighter around him as he waited. He was about to knock again when the door swung open to reveal wary green eyes in a too-pale face framed by dark, cascading waves of blond hair. Ryker blinked, stunned at the outright hostility that pulled the man’s lips down into a scowl, his trim beard and mustache only serving to emphasize it more. His wrinkled long-sleeved T-shirt was backward and inside out, and it twisted near the waistline, revealing a swath of pale abs. It looked as though he’d hastily donned it on his way to the door.
“Pretty sure you’re at the wrong cabin,” the guy growled, moving to shut the door in Ryker’s face. Slamming his hand against it kept Ryker from being left out in the cold.
“Even if it’s the wrong cabin, which I don’t think it is, there’s a storm coming, in case you hadn’t noticed, so I think I’ll just come in out of it, thanks.” Ryker took a step forward and trying to wedge through the opening. The other man held firm, however, and they stood there glaring at each other.
“Look,” the man snapped, “you could be a psycho or a serial killer for all I know, so you ain’t getting in here. I’ve got enough problems without accidentally ending up dead.”
Ryker felt the impatience radiating off the other man, which was fine by him; he was getting pretty goddamned impatient and cold himself.
“You look—” Ryker retorted, studying the guy more intently through bleary, snow-clouded eyes. Something about him looked really damned familiar. “I’ve been on the road for hours. It’s fucking cold out here, and it’s snowing buckets. I’m supposed to be at my cousin’s cabin, which the GPS says is right here. So here I am, and I’ve got no intention of driving anywhere until the shit lets up. My cousin’s name is Kyle—”

*****
Jesse couldn’t believe this shit. When he saw Kyle, he was gonna choke him to death with his own bass strings.
“Morrison,” Jesse finished with a sigh.

LAYLA DORINE lives among the sprawling prairies of Midwestern America, in a house with more cats than people. She loves hiking, fishing, swimming, martial arts, camping out, photography, cooking, and dabbling with several artistic mediums. In addition, she loves to travel and visit museums, historic, and haunted places. Currently she has seen forty-nine of the fifty states, with plans to visit her final one, Alaska, in the upcoming year.

Every journey is an inspiration and every shred of inspiration gets sprinkled into her tales. Layla got hooked on writing as a child, starting with poetry and then branching out, and she hasn’t stopped writing since. Hard times, troubled times, the lives of her characters are never easy, but then what life is? The story is in the struggle, the journey, the triumphs and the falls. She writes about artists, musicians, loners, drifters, dreamers, hippies, bikers, truckers, hunters and all the other folks that she’s met and fallen in love with over the years. Sometimes she writes urban romance and sometimes it’s aliens crash landing near a roadside bar. When she isn’t writing, or wandering somewhere outdoors, she can often be found curled up with a good book, a kitty on her lap, and her dog, Jinxx, by her side.

More books by Layla Dorine can be found here.